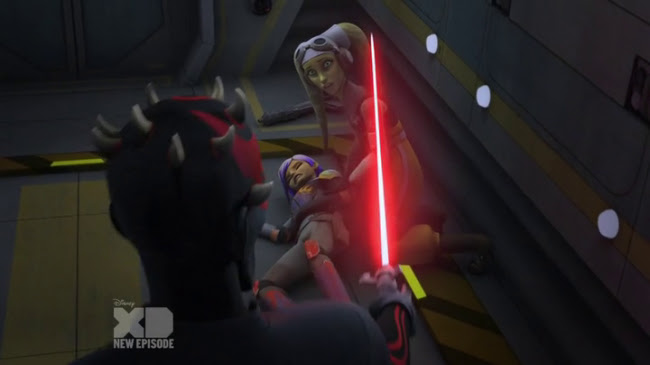 I still think Henry Gilroy is the best writer working on Star Wars: Rebels and the new episode written by him, "The Holocrons of Fate", is nicely plotted. The set up with Darth Maul taking the Ghost crew hostage was nice. Though the brief mention of Maul ruling the Mandalorians had kind of a "Darth Vader built C3P0" feeling of the universe being a little too small. I think the episode would have worked better for me as a whole if I could buy into the fantasy conceit of a necessary balance between good and evil. 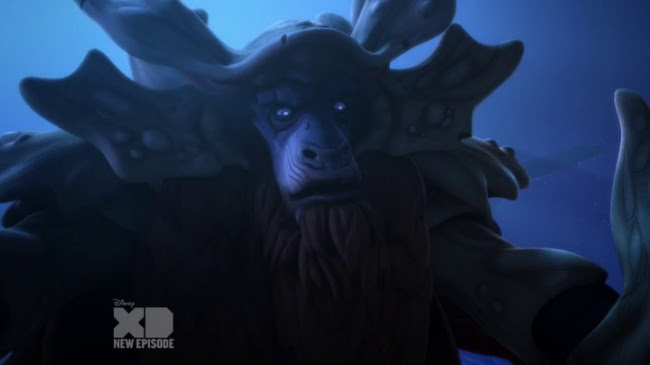 Tom Baker returns as Bendu, which is great, I only wish he didn't represent that balance, being the neutral Force user. Though, incidentally, he's basically functioned just like a light side Jedi master in his assistance to Kanan and Ezra. Maybe he'll help Maul later on to balance things out.

But why this focus on balance? Do we need someone to die every time someone's saved? The whole idea only works if we keep it at a very removed, theoretical level. But it tends to be treated like the difference between whether you think trickle down economics works or if more money should be put into government projects. This may be a bad time to use this analogy because obviously Donald Trump is an asshole but, theoretically, anyway, the person proposing trickle down economics does so because he or she believes it's going to help everyone in the long run. If someone chooses the Evil side, they're actively seeking to muck things up. But is the Dark Side the Evil side? Anakin actually says in Revenge of the Sith, "From my point of view the Jedi are evil!" 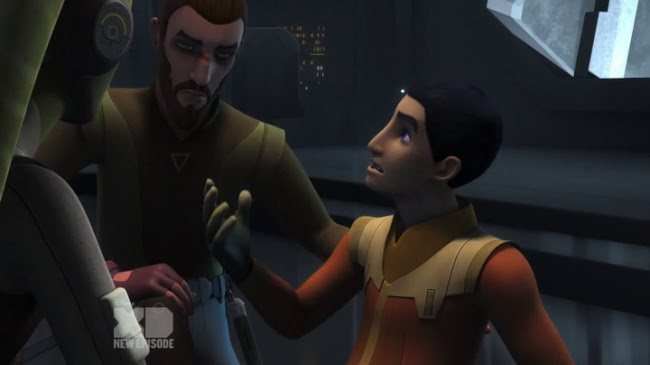 There was something really subtle going on with Clone Wars that doesn't seem to be happening with Rebels. All the introductions to episodes of Clone Wars felt like 1940s propaganda with a proud narrator touting the perfect virtue of the Republic, particularly concerning the clone troopers, and the pure evil of the Separatists. The betrayal of the clones hangs over everything really nicely; without making substantial references until the last season to Order 66, the show offers a message more complex for how simplistic it seems. The chosen one, supposedly Anakin, was supposed to bring "balance" to the Force. Mace Windu and Obi Wan think the prophecy's wrong because Anakin becomes a Sith. But who's to say it wasn't becoming a Sith that accomplished that balance? To further complicate the issue, there's the scene of Mace taking the "too dangerous to be left alive" line first used by Palpatine. How "good" are the Jedi? Are they as compromised as the clone troopers?

Mostly it seems like Rebels ditches all this ambiguity. But maybe they'll go somewhere more interesting with Ezra becoming Maul's apprentice, something that really needs to happen, especially since it'll be particularly painful after the effective reconciliation between Kanan and Ezra in "Holocrons of Fate".

Submerged in houses held by living scams
A court of speechless Daleks drowns in debt
Incurred at rates assumed by banks of hams
Still cold by bills of icy dinners kept.
A turning wheel absolves the pond from fish
Too late to shimmer with the morning tick
Or tock of clocks described in fervent wish
Like candles crowd to sheathe a single wick.
A starling hammer sits in state at terms
Ordained in dalliance and gum obscured
Behind the spheres of broken jaws and worms
In moulds, in mills, produced and dear procured.
The amber lantern hung beside the face,
The yellow bulb collapsed inside the case.