That's a Lot of Bodies 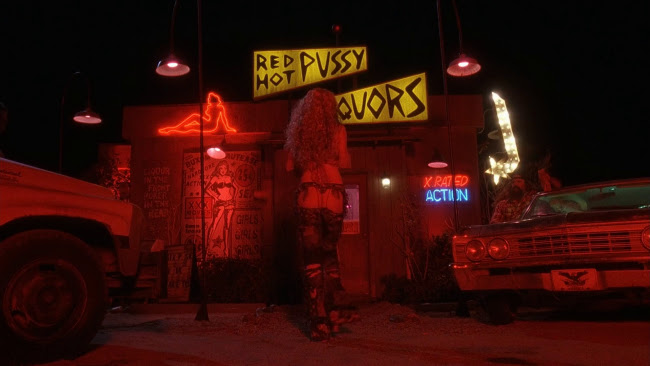 Ah, the glamorous, post-modern lives of hillbilly psychopaths. 2003's House of 1000 Corpses deliberately takes the bare bones of a 1970s horror film and reconstructs them into an orgiastic celebration of the villains. More of an extended music video homage to horror films than a horror film, it's a bit longer than it needs to be, kind of wearing out its welcome, but taken in short segments it's pretty fun.

The clearest influence on the film is The Texas Chainsaw Massacre as this film's hapless teens find themselves the unwilling guests of a family of colourful backwoods killers. But this family has a much larger budget for stagecraft. 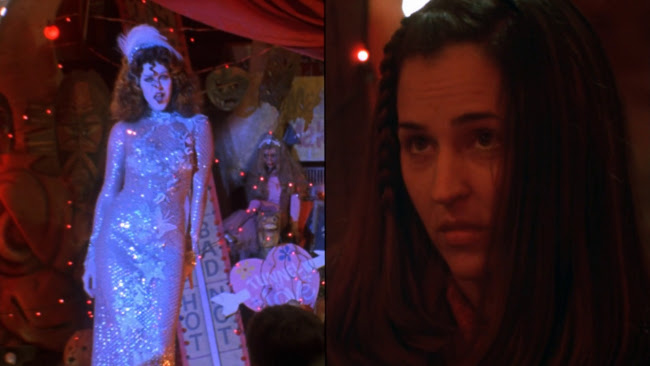 Here Sheri Moon Zombie, director Rob Zombie's wife, plays Baby Firefly in an impromptu routine for the teens who as yet don't quite know what's in store for them. There's a world of neon, leather, and costumes improbably concealed inside the Firefly family's little wooden house. But the teens themselves are also a bit conspicuously artificial, being the two nerdy guys--one slightly more easy going than the other--and their two exasperated, beautiful, normal girlfriends typical of the 70s horror films Zombie references. Rainn Wilson, here upstaged by Moon Zombie's butt, plays the less easy going nerd, giving a subtler, less ironic performance than his work on The Office. But the blocking in this shot reflects the balance of characters in the film--this is a movie about being the monsters and loving it. The lack of thoroughly established victims makes the monsters seem less monstrous, though since this, less self-consciously, was often the case in the B horror films of the 30s, 40s, and 50s Zombie drops clips from throughout the film, it makes sense. Not unlike The Rocky Horror Picture Show, this is about revelling in being this piece of humanity feared by the "normal" world. 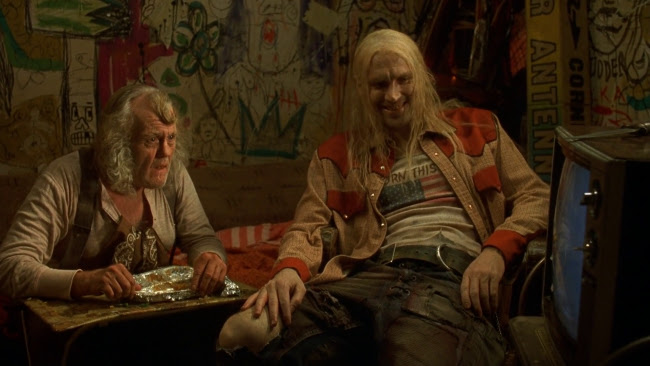 In addition to clips from old horror films, Zombie inserts little features on the members of the Firefly family. These clips feel slightly out of place in the film though the ones focusing on Sheri Moon Zombie are both sexy and touching for how much Rob Zombie clearly loves filming her.

Karen Black quite credibly plays Baby Firefly's mother but by far the best performance in the film is given by Sid Haig as a clown named Captain Spaulding after the Groucho Marx character from Duck Soup. 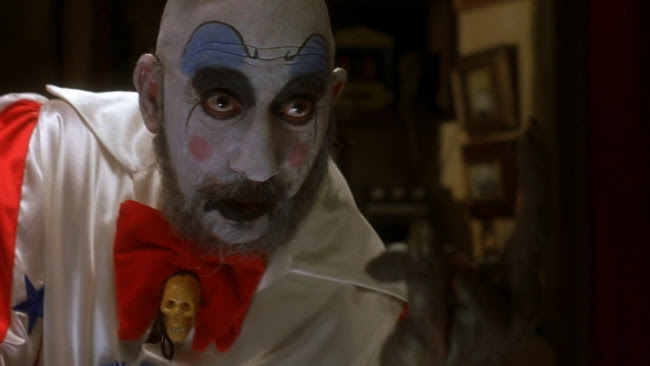 The first scene in the film, where he and a character played by Michael J. Pollard thwart a pair of armed robbers who try to hold up their carnival "murder tour", is more hilarious and suspenseful than the whole rest of the film.

Posted by Setsuled at 8:32 PM
Email ThisBlogThis!Share to TwitterShare to FacebookShare to Pinterest