The Clone from the Future is a Comrade 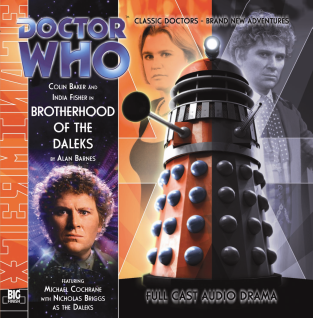 Some people say the incredibly complicated time travel paradox plots are examples of cheap, hacky writing. Well, I still usually get a kick out of them and enjoyed last night listening to the 2008 Doctor Who audio play Brotherhood of the Daleks.

There's an extra layer of complication on this one in that the Sixth Doctor (Colin Baker) and Charley (India Fisher) are also having to deal with Dalek replicants and can't tell whether they're meeting past versions of the hapless Thals they've already met on a jungle planet that's actually an ice planet or if they're replicants. On top of this, Charley keeps having to dance around the fact that she has travelled with the Eighth Doctor and for some reason Six keeps getting suspicious in this one whenever Charley inadvertently reveals she's from a period just after World War I (as when she uses the term "shell shock").

Charley's attitude about Communism has a hostility that may be a little extreme for someone from 1930 though I liked the Doctor's line in response about how she shouldn't judge a philosophy by how it's been misinterpreted. The reason they're talking about it is that the Daleks they encounter are using some oddly Communist terminology (like "brother") and seem to have trouble saying their favourite word (you know the one). Will Communism save the souls of the Daleks? Of course not, but it's an interesting idea.

There's some genuinely effective anxiety in the group of Thals the Doctor and Charley meet as they are confronted with dead comrades and are forced to figure out whether they're replicants or if they've killed their companions whom they took for replicants. In a really nice scene, Charley overhears the Thals whispering to each other lines from earlier in the story while they're being held in some kind of stasis chamber.

Posted by Setsuled at 4:32 PM
Email ThisBlogThis!Share to TwitterShare to FacebookShare to Pinterest