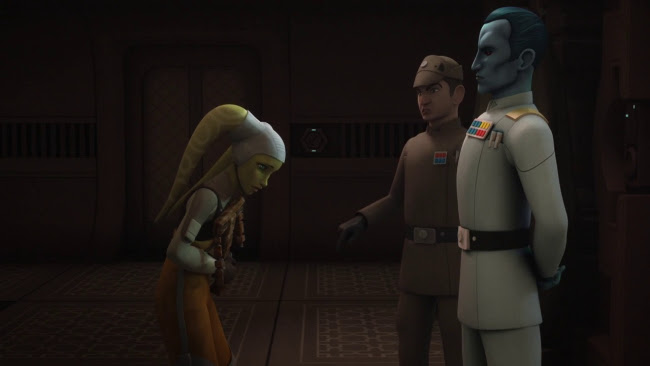 The top two things I really liked about Saturday's new Star Wars: Rebels: Grand Admiral Thrawn and Hera. In third place, I liked how Ezra was marginalised even though he was in almost every scene. He was basically just Hera's lackey and not as whiney as he normally is, which was just about right--if we have to have Ezra, he should be seen and not heard. Or if he is heard, nothing he says should have anything to do with his opinions or feelings. Unless he finally turns to the Dark Side, then: okay.

One of the show's biggest problems is its lack of good female characters. Well, some would say its lack of any good characters, but the women have been especially indistinct, particularly compared to Clone Wars which had many good roles for women even beyond Ahsoka Tano. The writers went so far as to bring Ahsoka onto Rebels in the second season, but for all the impact she had on anything that happened, it really felt like she was never intended to be there and none of the writers really wanted her there. 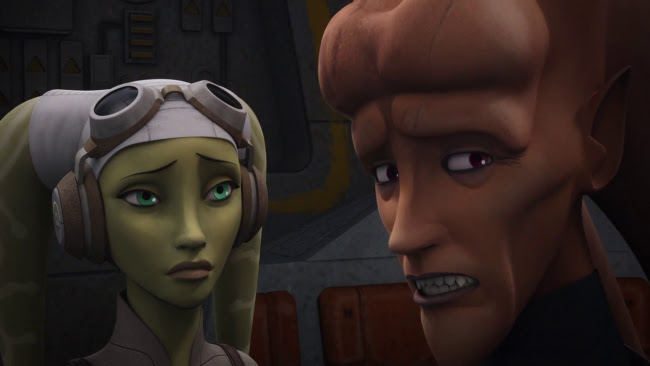 Hera, in the first season of Rebels, seemed patterned after the mother in Disney's film version of Swiss Family Robinson--a supportive, occasional council for the male characters. This new episode puts her at the centre in a more interesting way than Sabine was in the previous week's episode--which, while I liked it, didn't do much to develop her character and even had a pretty lame, obviously pandering moment when Sabine rescues Wedge and Hobby and, when they say they were planning to rescue her, she replies with an oddly patronising "That's cute." 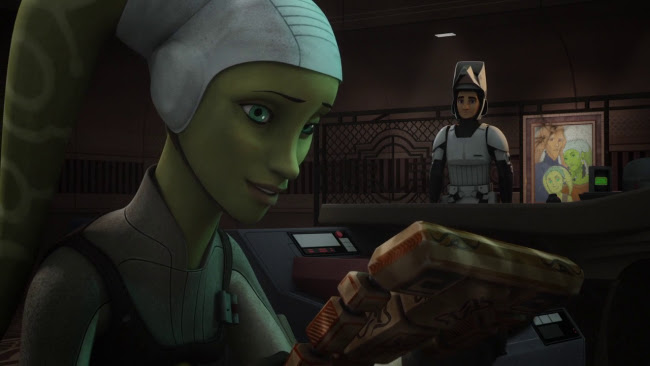 This new episode, "Hera's Heroes", the title a reference to Hogan's Heroes, brings us into Hera's experience on a more emotional level. Even though it's kind of ridiculous she's risking her life and the lives of others purely for a family heirloom--they could've at least planned on getting intel or sabotaging the base in the process--the sense of character history established and Hera's conflict between the girl she was and the fighter she's become are way more interesting than anything the show's done with Ezra's family history. Though obviously the heirloom, a generational art project of sorts, was invented entirely for Thrawn, one of whose defining characteristics is that he studies his enemies through the artwork of their culture. 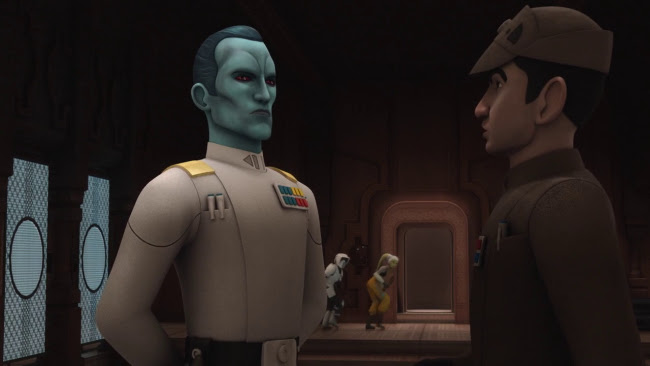 The title's reference to a series about a Nazi prison camp compels the viewer to compare the Empire to the Nazis again but stories with Thrawn also bring echoes of European colonialism into the Star Wars narrative. In some sense, he's like the French family in Ousmane Sembene's Black Girl who put west African masks on their wall without really understanding them. The key difference is that Thrawn does make the effort to understand but still with the same goal of dominating and subjugating. I was very glad this episode made the effort to reaffirm his personality as it was in the old Expanded Universe, particularly because it's such a needed contrast from every other villain on Rebels--every other Imperial leader, with the exception of Tarkin and Vader, comes off as ridiculously brutish. Vader's still brutish but James Earl Jones made him effective; Tarkin had a better demeanour but still proved relatively ineffective. Thrawn was genuinely fascinating in a way no villain on the show has been yet.