The Mask that Doesn't Give

Michael Myers is like an invader from another reality. In John Carpenter's 1978 original Halloween, the man escapes from an asylum and sets about killing teenage girls. Performances from Jamie Lee Curtis and Donald Pleasence as well as a restrained directorial approach by Carpenter make this film a nice portrait of lives horrifically disrupted by a human being who displays inhuman behaviour. I realise that sounds pretty mild and, yeah, I guess I'd say this is a surprisingly low key horror film.

I don't think that's merely because the stakes have risen so much in recent years for horror movies in terms of gore and shock value. There are plenty of 70s giallo and exploitation horror films that stack up well enough to a violent horror film to-day. This may be because Halloween was intended for a more mainstream audience. The only piece of back story we get for Michael is a prologue where Michael as a prepubescent child murders his sister in a really unconvincingly shot stabbing sequence.

Carpenter has said, and recently reiterated when speaking disparagingly of Rob Zombie's remake of the film, that he intended Myers to be "a force of nature" without the psychological motives typically given to killers in such films. A classroom scene where Jamie Lee Curtis' character, Laurie, listens to a lecture about religious and secular views on fate as an insurmountable, determining force supports this view, especially as it's accompanied by a nicely spooky shot from Laurie's point of view of Michael across the street, watching her.

That mask, too, as I talked about a couple weeks ago in connexion to Donald Trump, has this wonderfully eerie, prototypical man quality, this theoretical blank page that frustrates the instinct of an adult human to find a like creature on the other side of a discourse.

But there's so much that's hard to believe was accidental that suggest things about Michael's psychological issues. The fact that his first murder victim is his sister, who he finds topless right after she's had sex, or the fact that he consistently targets teenagers who are expressing their sexuality, or in the case of Anne (Nancy Kyes), just has the nerve to be topless where he can spy on her.

One might argue that this is meant to be less about Michael's motives than it is about creating a situation of physical and moral vulnerability for the characters. The preoccupation with sex as forbidden expressed by the forces of fate as Michael's assaults. It's really hard to disentangle the effect from interpretations of cause, though. If he quacks like a duck, and murders fornicators like a duck, he's probably a psycho puritanical duck.

I found myself wondering at connexions drawn between Laurie and Michael, too. Although it's really apparent she's not wearing a bra--this may just be a 70s thing--Laurie is established as more chaste than her friends, not even wanting to think about asking a boy out on a date. This gets us to the standard slasher film setup where the survivor girl is rewarded for her sexual virtue but an extension of that reasoning is that Laurie is on some level in agreement with Michael's worldview. A connexion between the two seems further emphasised by that fact that Laurie's the only person who takes Michael's knife from him--twice--and uses it against him. But the weirdest thing is the poster of James Ensor in Laurie's bedroom. 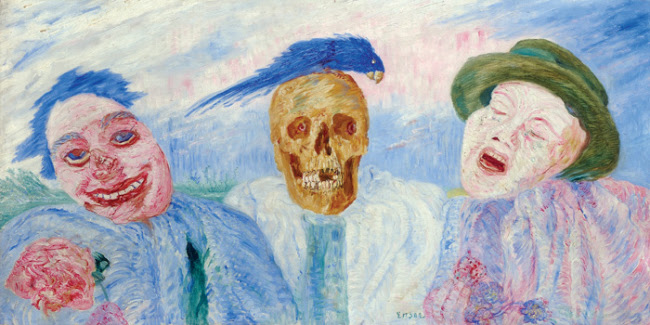 Not the typical painter a teenage girl would have a poster of on her wall. But you would think the atypical teenage girl who did like James Ensor would have a more extravagant example of Ensor's work on her wall. So with this poster it seems less like Carpenter is trying to say something about Laurie as he is just trying to send a clue out to the audience on how to read the film itself. The uncanny, masked and skull faces in Ensor's painters are freer to exist without circumstances that apply motives to them. Their strangeness asserts itself as strangeness, striking in their mystery. And yet, Carpenter's trapped by the inevitable logic in the scene--Laurie has put a poster of Ensor on her wall. It contributes to a feeling of spiritual connexion between her and Michael. The effect of this connexion, I suppose, adds weight to an impression of disapproval towards open sexual expression.