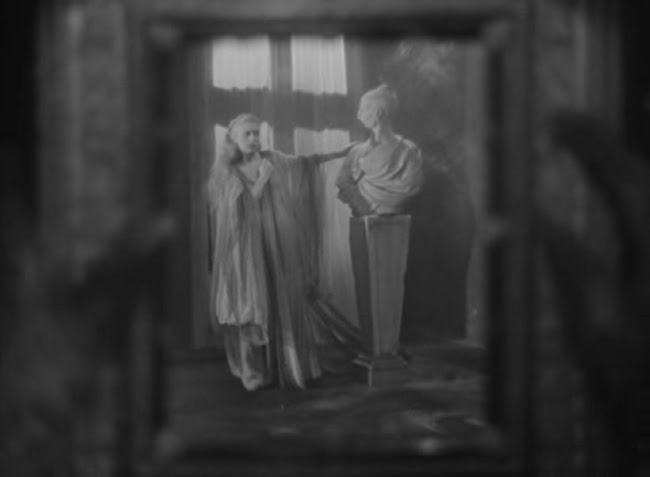 It'd been a few years since I watched Jean Cocteau's 1946 version of Beauty and the Beast ( La Belle et la Bête) and I found myself in the mood for it a couple nights ago. Just now it occurs to me a suitable thing to write about on Valentine's Day. Such a beautiful, visually imaginative film but with such surprisingly strange depths in its perspective, it's the most adult adaptation I've ever seen. Which is to say, it's the version that most seems to digest the simple story from an adult's perspective who has come to understand the intricate, unspoken details of relationships.

There are several substantial ways in which Cocteau departs from Jeanne-Marie Leprince de Beaumont's original story. There's addition of a scoundrel brother for Belle and his friend Avenant, played by Jean Marais, the same actor who plays the beast. The two men present added drama to the story in their attempt to kill the beast and Avenant presents a romantic rival. But they do much more than that. 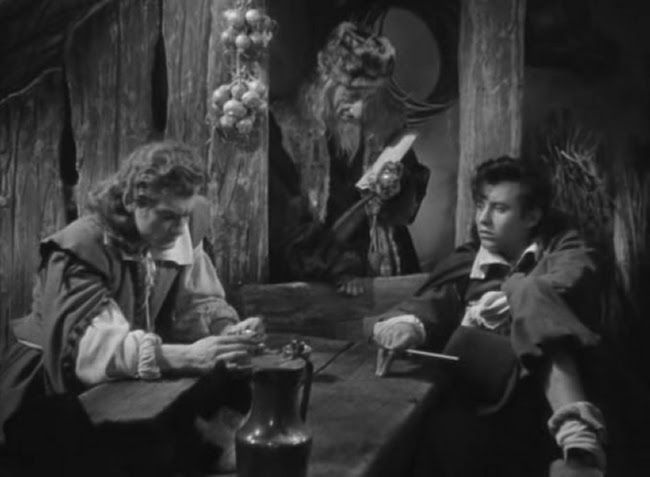 Ludovic (Michel Auclair), Belle's brother, directly contributes to the family woes when his rash deal with a moneylender causes the family's furniture to be ceased. Despite this, he carries himself with a contented air as though all this were the ravages of fortune for which he is ultimately blameless. But he wastes no time heaping scorn on Belle's sisters and even on Avenant for courting Belle. Really, Cocteau's Belle is surrounded by assholes. As in the story, Belle doesn't want to marry because she doesn't want to leave her father (Marcel André), but in the film, when the idea of her being married is brought up, he immediately, desperately asks her if she's going to leave him. As in the story, he can't afford a room in town so he has to make his way through the dark forest at night, but in the film he pathetically whines about it first. 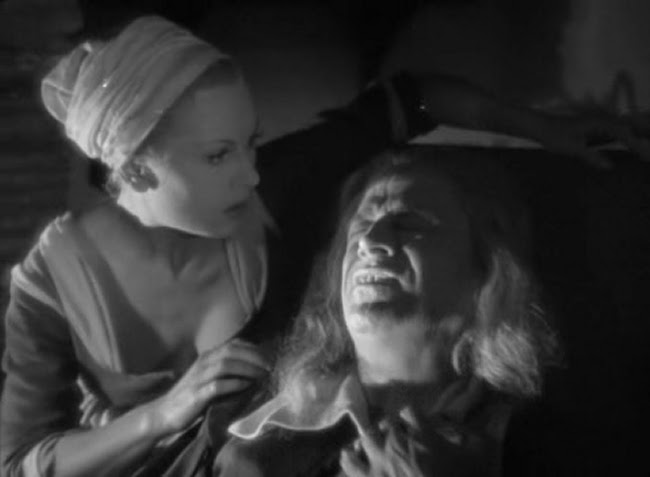 The original story doesn't have Magnificent, the magic horse that takes people in Cocteau's film anywhere they want to go. One of the important implications of this is that Belle is able to sneak away from her family and go to the Beast's castle before anyone can stop her. In the story, she insists on accompanying her father. In the story, he can say he comes home instead of accepting immediate execution from the Beast because the Beast gives him treasure that he can use to at least see the kids are provided for. In the film, it looks like the father is rather passive aggressive, going home just so he can tell the family that even though the Beast would accept one of his daughters in his place (hint, hint), he's willing to go back and sacrifice himself. 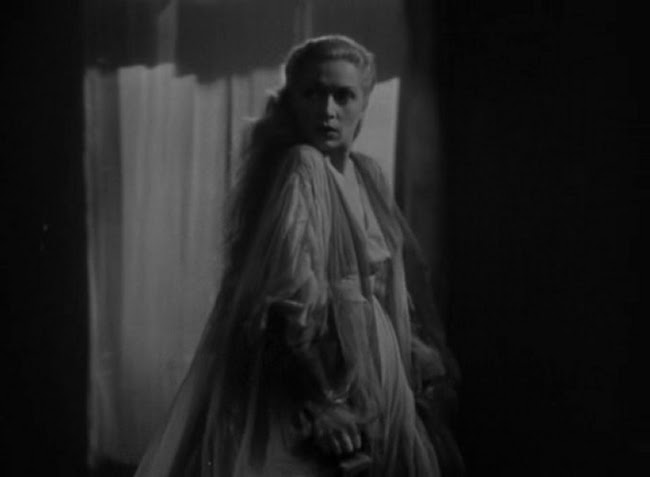 The most significant difference, though, is in the casting of Josette Day in the role of Belle. The impression one has of Belle from the story is that she's a pure, innocent soul unacquainted with the ways of the world. She does all the housework because she's absolutely devoted to her family and she still needs to be taught the lesson, the moral of Beaumont's tale, that a lifelong mate is a good companion, not necessarily someone with beauty or wit. Josette Day, rather than an inexperienced teenager, was 32 when she played Belle and her self-possessed air gives the impression of someone who's learned all these lessons already. She does the household chores not out of devotion but because she knows if she won't do them no-one else will. When she comes back from the castle, she immediately notices her brother and sisters have hung the laundry up wrong. 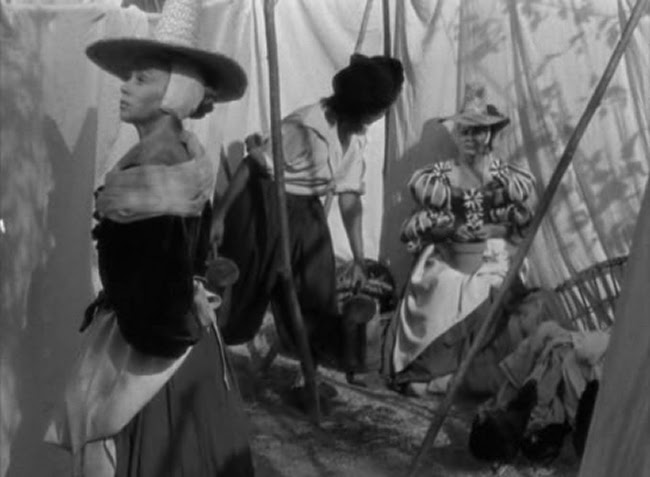 When she says she's unaccustomed to fine attire, the impression is not of a girl brought up without the worldly pleasures but of a woman who has considered and adopted an austere, pragmatic philosophy.

And yet, she has a real respect for beauty. She's not as obnoxious as her sisters but she does seem to have a kind of vanity. Or rather, she sees value in deliberately cultivating beauty. In the story, Belle asks for the rose because she doesn't want her sisters accusing her of being too full of herself. We don't get this explanation in the film, automatically giving the request the sense of coming from someone with a sensibility for aesthetics. Cocteau has Day move with stylised, ballet-like movements and, as her sisters note, she dresses in the finery the Beast gave her when she's alone in her room. This is a Belle who calculates. We learn at the end of the film that she was in love with Avenant all along, but had not gone to pieces over the fact that marriage to him wasn't practical or convenient. 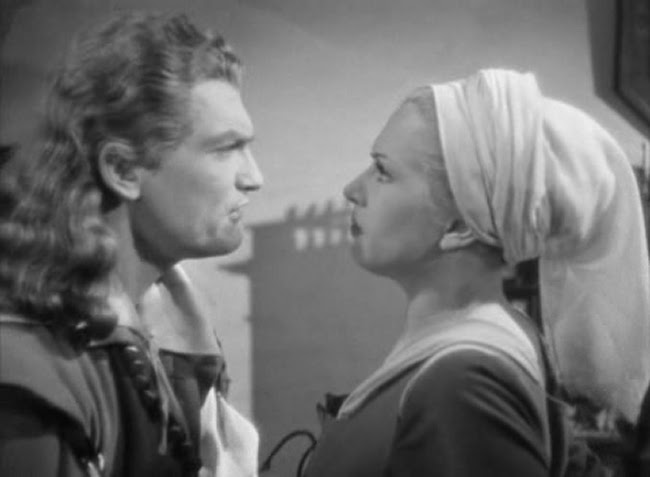 Cocteau had a lot of options as to how he could interpret the Beast, and the quiet, discreet performance Marais gives could have easily been something much harsher. But the story does present him as giving Belle as much space as she desires so long as she doesn't leave the castle and in the story and film he speaks of himself in a very unfavourable way. Marais brings out something of the paradox of his position--how he seems to feel with his whole soul that he should be her servant, yet he can't give her freedom or there's no relationship at all. His giving her the key to his powers seems in this light an attempt to compensate for this one, great imposition he must make. He seems wracked with guilt and why shouldn't he be--he wants to be in a relationship, but being a beast, he can't make that happen without some amount of sin. Day's Belle doesn't seem to have any conflict like this and so comes off as the authority figure in the film. In the end, it's not her father or the Beast who seems authorised to judge whether things have worked out for the best but her, the only one in the film who seems to have the acumen.