The Unreliable Armour of the Daleks 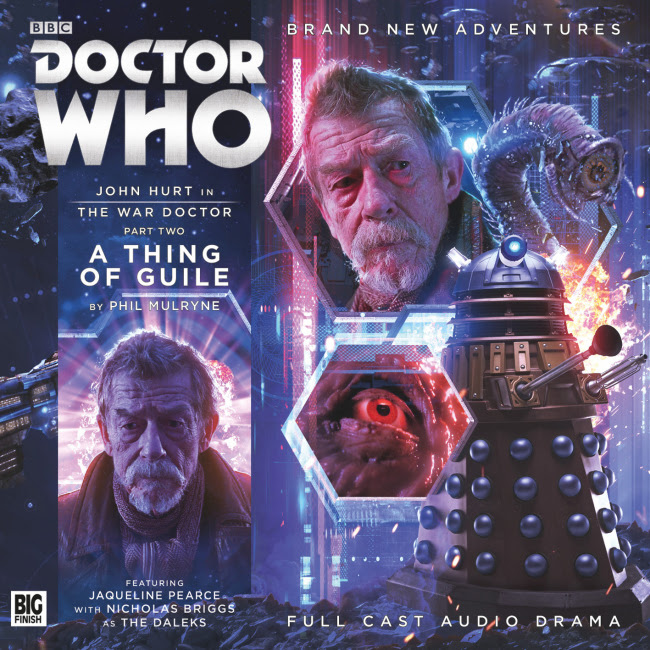 The second story in the second War Doctor audio play series, A Thing of Guile by Phil Mulryne, picks up with the War Doctor (John Hurt), now a prisoner of the Time Lady Ollistra (Jacqueline Pearce), being forced into helping her on a mission to a secret Dalek base. A nice enough Dalek story, it's of the genetic experiment type of story that's been done a few times with Daleks (Genesis of the Daleks, Revelation of the Daleks, "Evolution of the Daleks") but there are a few nice ideas put into play in A Thing of Guile.

Most of the story takes place in a series of underground tunnels and Mulryne does a nice job of establishing what's happening by having the Doctor (who's generally referred to as "the prisoner" in this one) and Ollistra describe what they're seeing without understanding what they're seeing. They're wearing goggles that allow them to see in the dark and this pays off with a creepy revelation later in the story.

Ollistra has had a relatively minor role despite appearing in every War Doctor audio play I've listened to up to this point but here she basically functions as a companion. Jacqueline Pearce and John Hurt have an amusing, tetchy rapport, something else that becomes part of the plot in an unexpected way, founded on Ollistra having the position of real authority while the Doctor is there because she can't deny he has the greater experience. One of the more effective moments in the episode, though, is one where they forget their difference for a moment to wonder what a series of ghostly objects are they see passing by overhead. It was a nicely, surprisingly eerie moment.