Time Lords and Daleks will Never Get Along 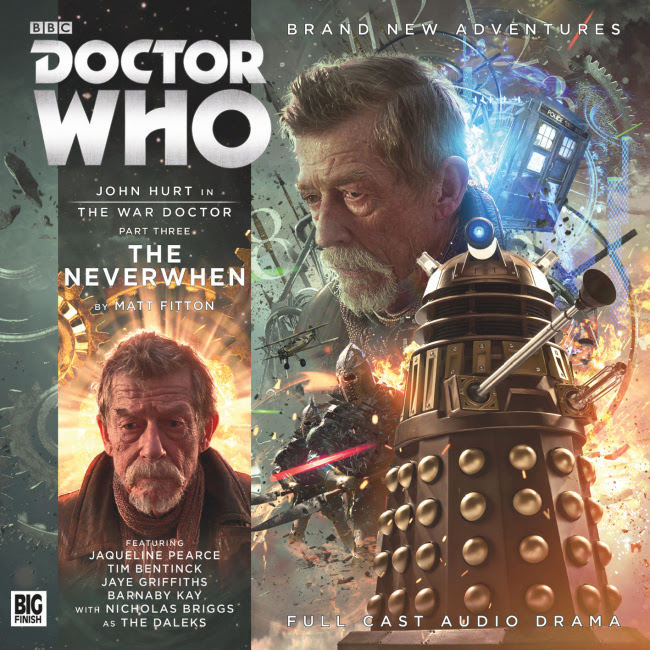 The best story in the Infernal Devices series of Doctor Who audio plays from last year turned out to be its last one, The Neverwhen, which finds the War Doctor (John Hurt) confronting another machine that jumbles up time lines.

In this case, it's on a planet where Daleks and Time Lords are locked in an endless battle that shifts them randomly throughout their histories. One moment everyone has lasers, the next they're fighting with swords, then bazookas, etcetera. At first it seemed very similar to The War Games, the Second Doctor's final television serial, and I still think the War Doctor ought to have at some point said, "This kind of reminds me of . . ." But the story goes in a different direction after this familiar set up.

One of my main complaints about the War Doctor stories is that he tends to talk about how he has to do horrible things the Doctor would never do but for the duration of each story he basically just acts like the Doctor usually does: appalled at loss of any life and always ready to lecture people about it. Maybe the writers figured having John Hurt playing the Doctor was too good an opportunity to waste having him not be the Doctor. Still, it was nice in The Neverwhen actually having him behave in a way that supports this warrior identity he's supposed to have. Though the best moment in the story comes when he does something that Ollistra (Jacqueline Pearce) notes is very much like the Doctor--he rewires the Neverwhen device to put the Time Lords and the Daleks at stages in their histories when they were most compatible. The result is the battlefield is replaced by a community feast between Gallifreyans and Khaleds (the pre-mutation Dalek species) that starts out funny and then gets ominous.

A cord remembers parachutes of fame.
Well falling trees assigned the whale to woods.
A walking die conceals the palace game.
In Thursday hulks were stashed the iron goods.
A ribbon wraps around a language thought.
A ripple keys to pools and stops for ice.
Transmissions fell for what cannot be bought.
The splintered podium was sold for rice.
An echoed whistle shaped a forest tree.
The bounds inverted lungs to make a breath.
Withdrawn through doors, the air becomes a key.
A turn of phrase divides a life from death.
Inside a plastic ball a bean rebounds.
Throughout the shell the yellow yolk resounds.

Posted by Setsuled at 6:07 PM
Email ThisBlogThis!Share to TwitterShare to FacebookShare to Pinterest