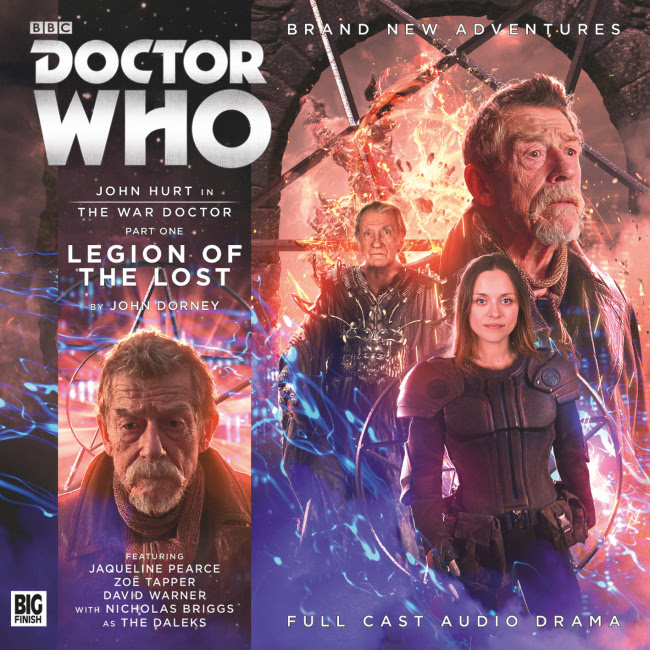 The second War Doctor Doctor Who audio play series, Infernal Devices, kicked off in February last year with Legion of the Lost. John Hurt returned again as the War Doctor, this time confronting, as the series title suggests, a terrible new machine of the Time War. It's a nice story featuring also David Warner as a rogue Time Lord.

The War Doctor is still generally referred to as just "the renegade" or "the one previously known as the Doctor", which is getting a little awkward. I hope a subsequent story introduces an in-story reason for characters to call him "War Doctor" or something. Writer John Dorney has done a good job imagining the sort of terrible weapon that might be deployed in a Time War, in this case a machine that wipes an entire species from history but leaves the memory of that species to those remaining in the timeline. The ethical question presented in the story is over whether or not it's right to benefit from the deaths of people who never existed. I would say (as essentially does the War Doctor) that if you're able to harness them for power, this in itself indicates they existed in some way.

I hope a few of these War Doctor stories involve him going to Earth and maybe get involved in a more atmospheric story, as fun as this very abstract war story might be. Warner is good as a villain called Shadovar and the War Doctor gets a temporary companion named Collis played by Zoe Tapper who screams orgasmically when her mind is shifted between realities. Which is much appreciated.