Beaming Around and Around 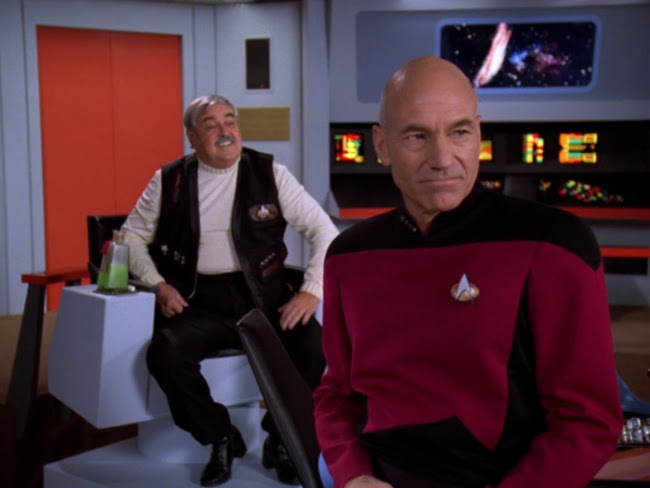 As usual, Montgomery Scott set a good example when he wore his pants close to the natural waist in "Relics", the sixth season episode of Star Trek: The Next Generation. If you have a gut of any considerable size, you shouldn't allow the waistline of your pants to cradle it. I've been seeing this around town. It's not a good look. That's one of the reasons I recommend suspenders/braces.

"Relics" is an episode that justly has a lot of affection. Although there are a lot of quotable Scotty-ish lines from Scotty (James Doohan) ("I was drivin' starships while your great-grandfather was still in diapers!") the winking references don't dominate the story. Instead it's about a man fighting with the circumstances that lead older people to feel marginalised, a fairly relevant story to-day when ageism seems to be prevalent among young people, though I suppose an episode of TNG may to such people be a little too old to be worth paying attention to. 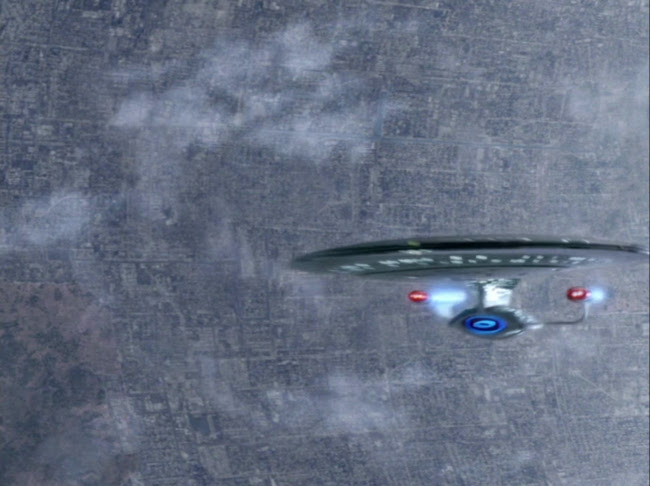 I suppose I probably haven't won any of them over by starting this post endorsing high waisted pants. Oh, well.

After encountering the massive Dyson Sphere, an enormous hollow habitation built around a star designed to allow populations to reside on the interior surface, the crew of the Enterprise-D encounter a crashed ship with Scotty preserved in a transporter buffer for 75 years thanks to his own engineering genius. There really needed to be a scene where the characters beamed down to the interior surface of the Dyson sphere, I think, though we sort of got that in the Orville episode "If the Stars Should Appear". Also in the Doctor Who episodes "World Enough and Time" and "The Doctor Falls" as well as Farscape episodes set on the Peacekeeper ships or the rebooted Battlestar Galactica series in episodes set on that station or in Interstellar at the end . . . Well, that kind of thing is a little overexposed now. I'm guessing "Relics" probably didn't have the effects budget for it though now it seems like a budget short cut to just go outside and say, "It's actually a really advanced space craft out here!" 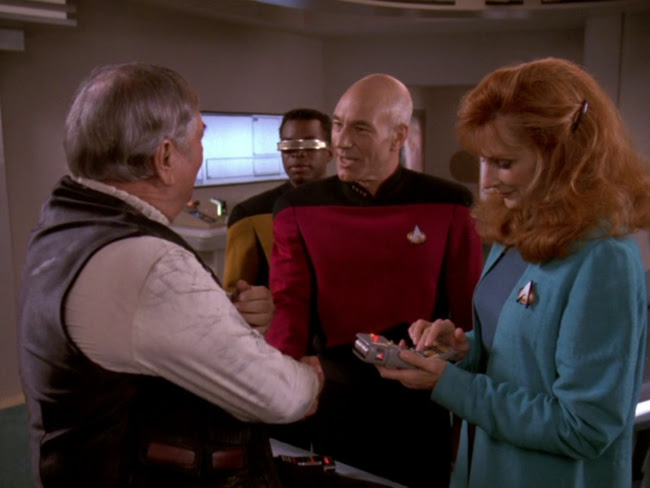 I felt like it was a little cold when Picard (Patrick Stewart) immediately brushes off Scotty in sick bay. Shouldn't he and La Forge (LeVar Burton) have asked some of the more detailed questions about the crash of Scotty's ship which they do get around to later? Well, writer Ronald D. Moore nonetheless gets the important stuff right with the emotional core of the episode. 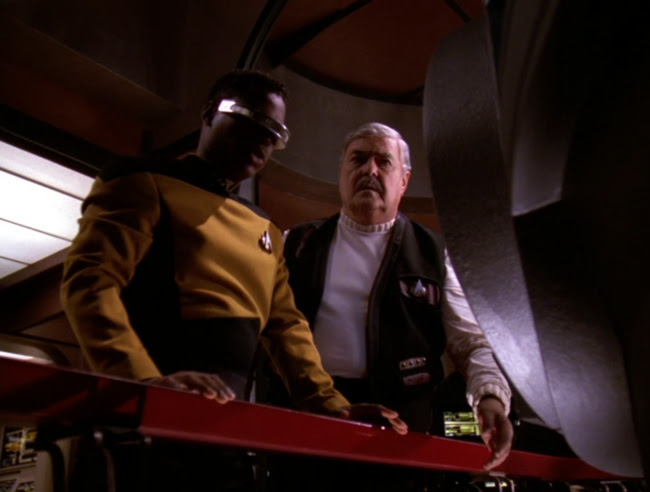 It's crucial that 75 years ago Scotty was on his way to some kind of retirement colony. He's already thinking of himself as finished, and you sense this in his dialogue with Picard on the Holodeck recreation of the original series Enterprise; "There comes a time when a man finds he can't fall in love again. He knows it's time to stop. I don't belong on your ship. I belong on this one. This was my home. This was where I had a purpose . . ." It's an old question; how much is the physical and mental decline of an individual due to nature or perception? One might think of the recent embarrassing story of a Dutch man who tried to legally change his age from 69 to 49. 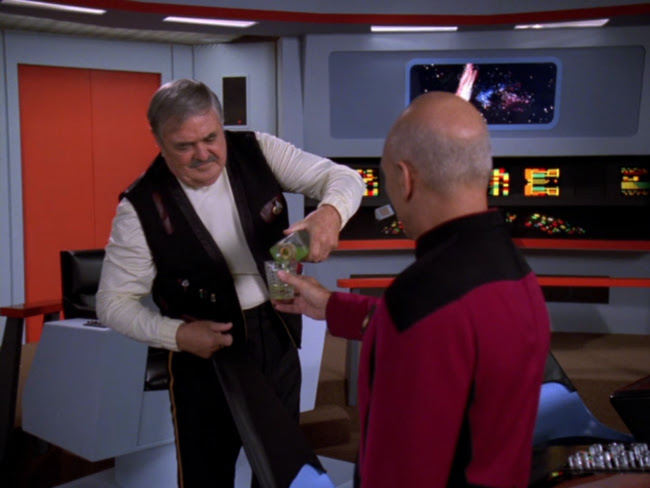 Scotty has a better claim to disputing his legally defined age considering he was held in stasis for 75 years, raising a legitimate ambiguity as to how his age should be defined. But fortunately by the end of the episode he's more focused on things he can accomplish rather than on the ways he's perceived. The kind of respect he wants, after all, is better earned by walking the walk than pitifully demanding respect (though, again, the way he wears his pants goes a long way). I kind of like that we never find out what happens to him after this episode, though Memory Alpha claims Doohan wanted to be a regular on Deep Space Nine. How great would that have been?

A jelly sandwich spelled preserves in bread.
A pizza cooled while waiting late for spoons.
The land of check was patterned white and red.
No microwaves can breathe in paper tombs.
A cocoanut concludes a crumbled road.
To pass the brainy jug we must arise.
The army grants a star a meek abode.
For pants exceeding long we must resize.
A sushi switched for crackers quickened tongues.
The test continues late beyond the night.
A breathe of air destroyed the diff'rent lungs.
The circulation rose in proxy might.
The matter sparkle wrought the dough to fly.
A pastry's worth exceeds its price to buy.