Wedged in the Time Corridor 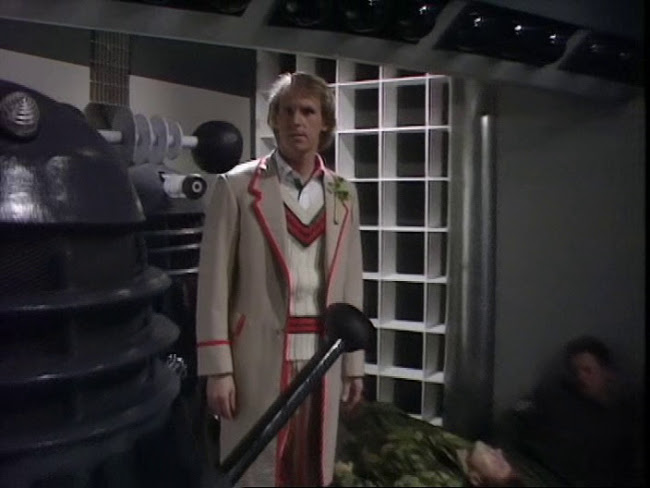 Those of us in the U.S. who watch classic Doctor Who via BritBox have for some time wondered at the mysterious absence of several Dalek related serials from the otherwise complete collection. The series, aside from many no longer in existence First and Second Doctor serials, was in tact up until the 80s Doctors--most of the Fifth, Sixth, and Seventh Doctor Dalek serials were inexplicably absent. I assume it was related in some way to the late Dalek creator Terry Nation's estate which still apparently owns the Daleks and is rumoured to be difficult to negotiate with. Well, this past Halloween, just as mysteriously as they were previously excluded, BritBox made all those Dalek episodes available to paying customers. I didn't realise it until last night. So I thought it fitting to watch Resurrection of the Daleks to celebrate, a Fifth Doctor serial from 1984.

According to the TARDIS Doctor Who Wiki, writer Eric Saward was "unsatisfied with the story," contending later "it was too frantic, with too many ideas." Indeed, a lot is going on--the Doctor (Peter Davison), and his companions, Tegan (Janet Fielding) and Turlough (Mark Strickson), are caught in a "Time Corridor"--something never very clearly defined--and wind up in London in 1984. There are zombie police shooting at men from the future; the Daleks are involved; there's a "Supreme Dalek" now; they're trying to break Davros (Terry Molloy) out of prison to come up with a cure for some kind of virus deadly to Daleks; there's some British military unit that dresses suspiciously like UNIT but they aren't UNIT--all this in only two 45 minute episodes (a departure from the usual 25 minute episode format necessitated by an Olympics broadcast). 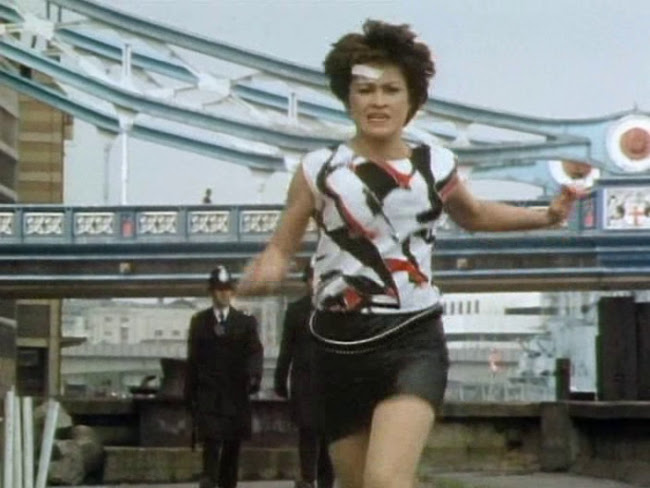 This is also Tegan's final story. I always liked how she departed--just freaked out and unable to cope anymore. Realistically, this should happen to a lot of companions.* It's hard to blame her, too; she suffers a head injury in this serial and watches as the military officers caring for her turn into Dalek zombies. She also sees an extraordinary number of casualties in this episode, including an innocent bystander with a metal detector who the cops chasing her shoot apparently out of pure sadism. And she has to do everything in a micro-mini skirt and heels. 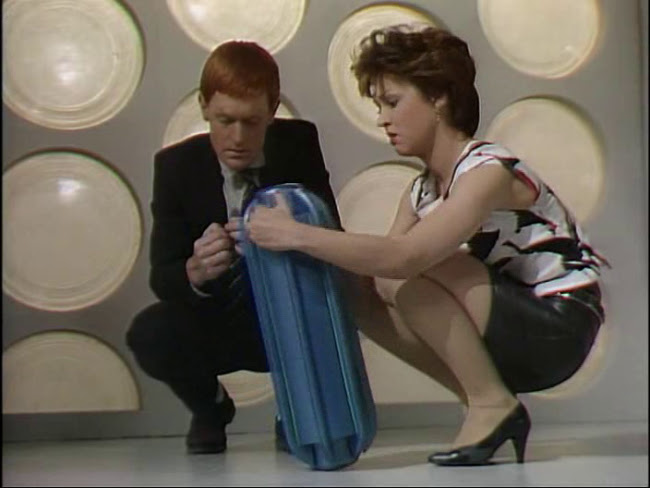 I, for one, will always appreciate that.

Turlough, meanwhile, ends up sneaking about the Dalek ship and the prison station that held Davros. He watches as most of the personnel get exterminated or zombified but teams up with one guard (Jim Findley) and teaches him how to be more ruthless and cunning. I do like Turlough. 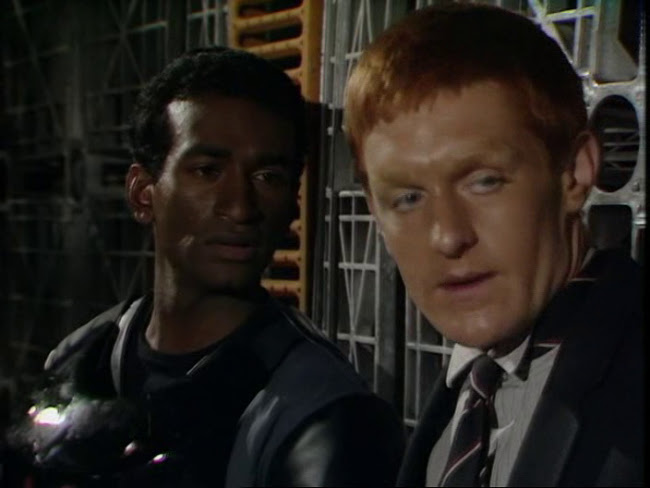 I also liked the plot thread with the woman in charge of the prison, Osborn (Sneh Gupta), who ends up in a miniature horror drama as one of her subordinates gets half his face melted off. She gets caught between him, a terrifying figure plaintively begging for help, and a line of Daleks blowing open the wall. 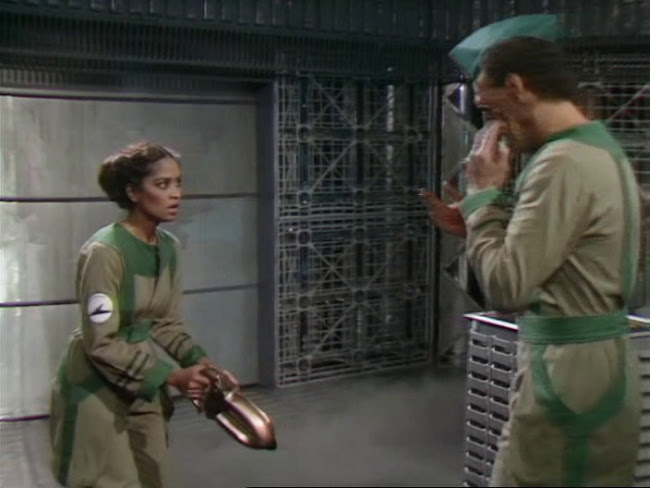 The Doctor is himself forced to extraordinarily violent methods. Despite his distaste for guns, he's compelled to use several in this episode, not for the first or the last time. 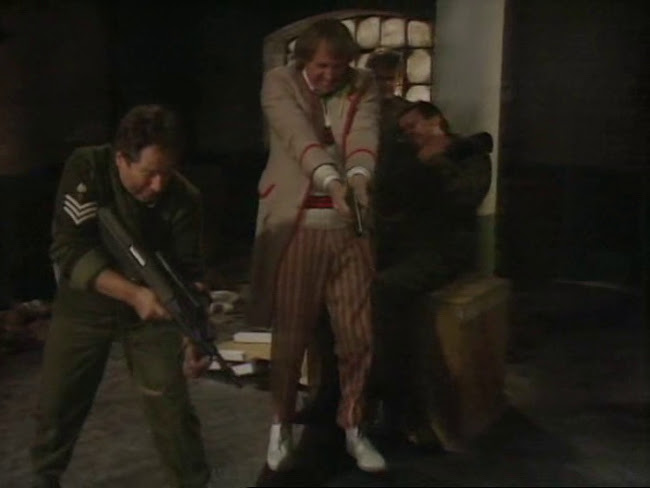 Of course, sometimes it's necessary, it would be stupid if the Doctor refused to use a gun under any circumstances. He uses an Earth pistol and several laser pistols in this one. He almost accidentally shoots a cat, mistaking it for one of the Daleks slithering about without their robot shells. 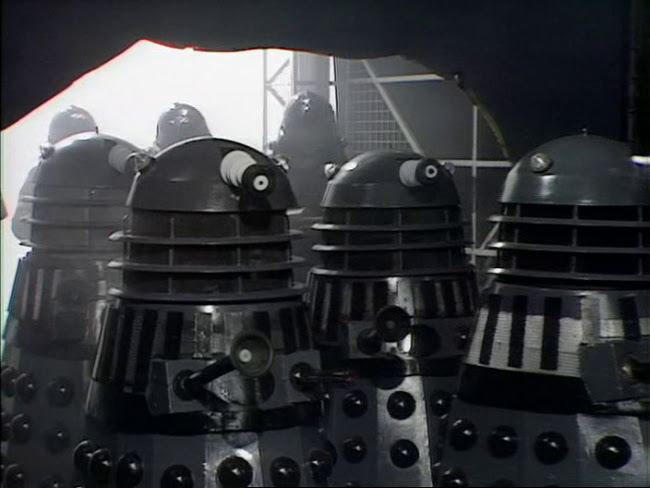 You do get the sense of a chaotic and deadly situation throughout this serial but the clutter does prevent some of the dread from really setting in. Though personally, I only find the Daleks truly eerie in their first two, First Doctor serials. But Resurrection of the Daleks is a good frantic bit of television.

*But Tegan does eventually reunite with the Doctor in a 2006 audio play called The Gathering.

A single bean was keeping Earth afloat.
A muscle made the mustard stronger stuff.
Buffets abound aboard the butter boat.
Successful people wore a collar ruff.
Appraising eyes were watching 'neath the stair.
A whisper cut the candle late to-night.
The little flames became the watching pair.
A magnet shifts the lamp from dark to light.
Opinions lightly fell on silver plates.
Discretion carries phones across the lawn.
A foyer's patient presence ever waits.
A cough informs the sun about the dawn.
The footless heels ascend the mountain slope.
A spiral wheel contends the spokes'll cope.

Posted by Setsuled at 4:39 PM
Email ThisBlogThis!Share to TwitterShare to FacebookShare to Pinterest
Labels: dalek, doctor who, peter davison, resurrection of the daleks, television, tv show