It's d'Abo, it's de Lancie, it's Delovely, it's De Unlimited Power 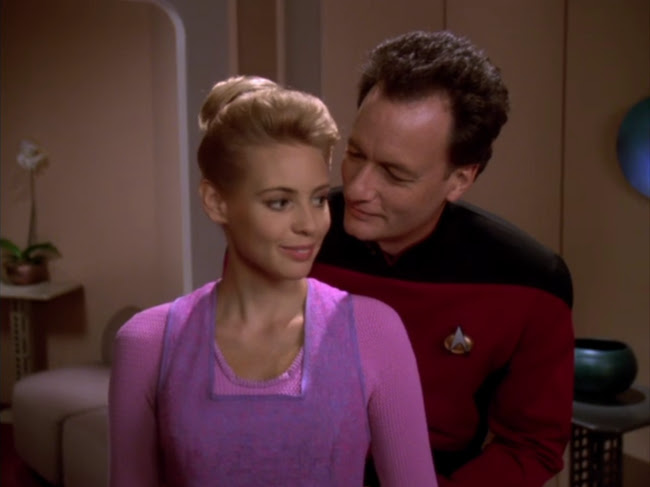 It's my naive belief that I'd enjoy being omnipotent but it's all kinds of trouble for a young woman in the 1992 Star Trek: The Next Generation episode "True Q". Guest starring Olivia d'Abo, one of the stars of the best Conan movie, Conan the Destroyer (search your feelings, you know it to be true), it's an episode I enjoyed as a kid, liked somewhat less as I grew older, and now I've gone back to appreciating, but for different reasons. 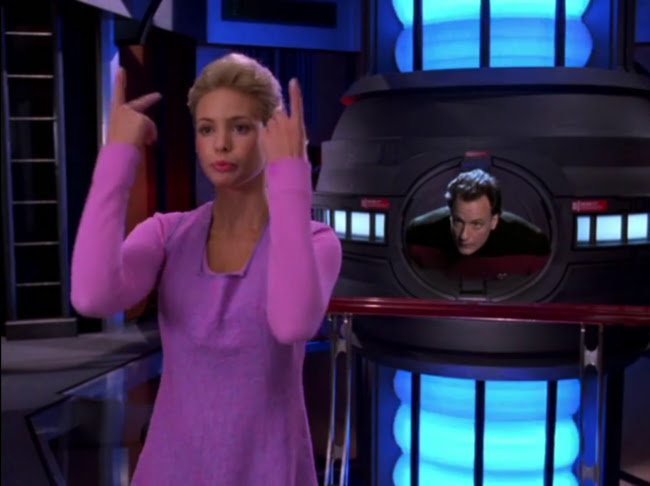 Q (John de Lancie) is one of those characters kids are more likely to enjoy than adults. To a kid, what could be better than a character who shares their poor understanding of and impatience for adult concerns but also has the power to override the adults at any time? But "Deja Q" and "True Q" reveal Q's people, the omnipotent beings known collectively also as Q, are governed by laws, which is inevitable, if you think about it. A race of childish, capricious beings exercising unlimited power at every whim would make existence impossible. 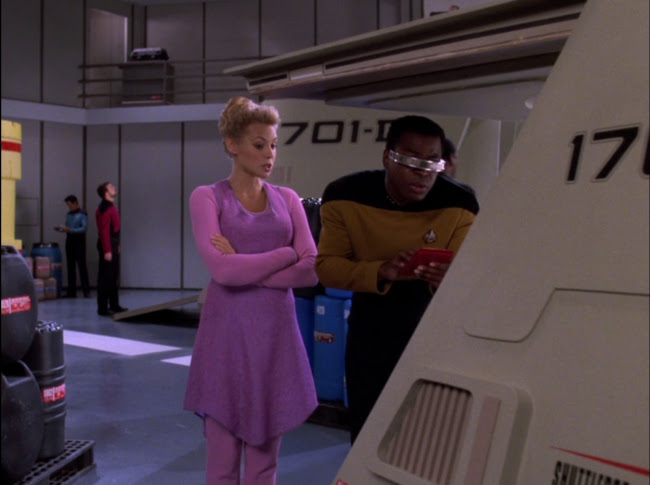 So the premise of the episode is that Amanda (d'Abo), upon discovering herself to be Q despite having lived as human all her life up until now, must choose between living among humans and suppressing her powers or going off with Q and to live as the Q. The rules are a little fuzzy, though, because it's implied she can come back and visit whenever she likes. 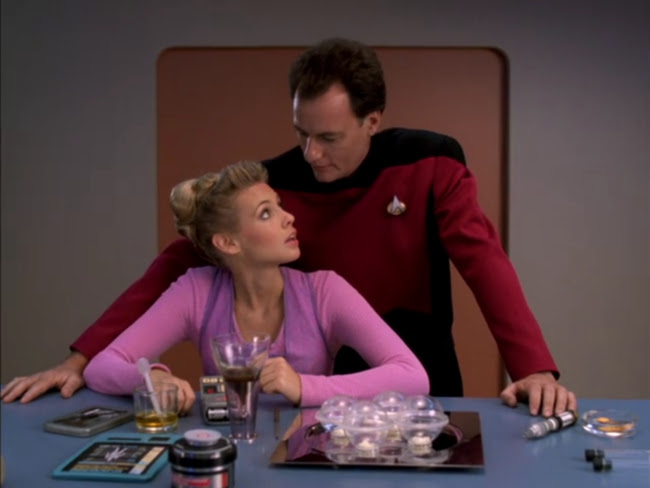 The idea seems to be that the Q have their own version of the Prime Directive. It makes me think about the purpose of the Prime Directive in the first place. I think there are two justifications for it--one is that, as peoples and societies evolve, they create a particular story or identity that would be shattered if interrupted or "sped up" by other cultural and technological influences. The other reasoning is that, however good or benign the intentions of the interfering culture of superior technology, problems would inevitably result due to the imperfections of the interfering culture. This latter would be the reason that might have tied the conception of the Prime Directive with the Vietnam War, the former reason being how it generally seems to manifest after the Original Series. 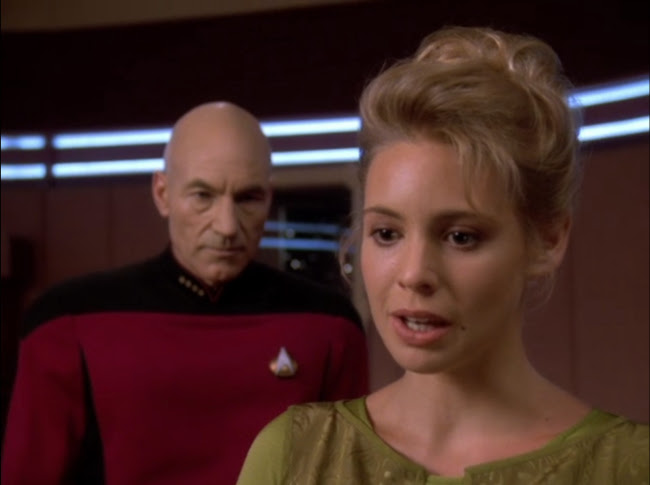 It's hard to see what's wrong with Amanda fixing the polluted atmosphere of the planet in the climax of this episode from either line of reasoning, and the show doesn't even attempt to explain why she shouldn't have interfered. But there's a subtler idea that kind of gets lost by the end and it's introduced in the beginning, when Amanda thinks she's just a very gifted human student who won an internship on the Enterprise. Picard (Patrick Stewart) tells her to keep in mind what a rare opportunity she's been given and Crusher (Gates McFadden) takes her under her wing. This is the culture that would be interfered with, the value system of advancement that's been impressed on Amanda throughout her academic career, and the responsibilities of mentorship Picard and Crusher feel. 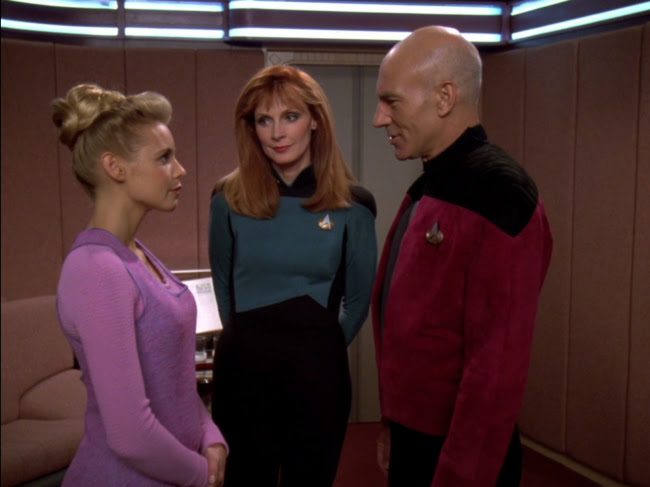 It's never really addressed that way, though. The first conflict comes when Amanda's use of her powers interferes with an experiment Crusher's performing because Amanda doesn't understand the point of the experiment was to record developments over time rather than to reach an end point as quickly as possible. Of course, with omnipotent power, Amanda could conceivably reproduce the same effects of the passage of time or even travel back in time to perform the experiment properly and return at the same moment. This is a flaw in the plot's reasoning that detracts from the point the writers may have intended to make. When writing about omnipotence, you can't rely on the limitations of omnipotence, only on the limits of the imagination of the omnipotent. Which presumably are only as great as the omnipotent being allows them to be. 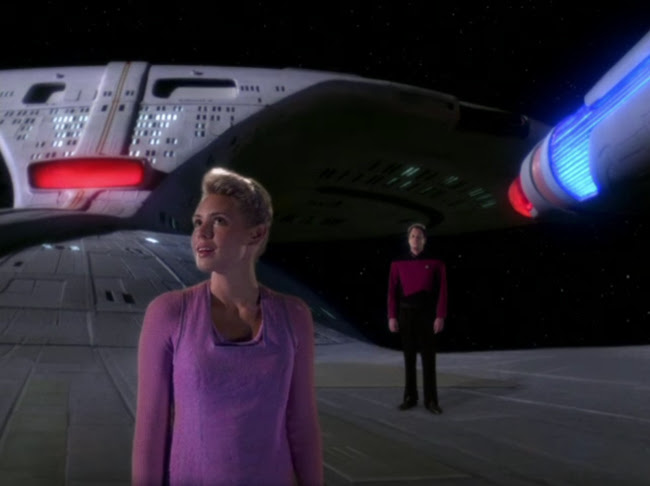 The interesting idea that for some reason isn't quite developed is that limits are required to give achievement any meaning. But on the other hand, to use unlimited power properly would be a pretty impressive achievement, too.

A light was sep'rate stuff from metal tubes.
Encouraged spirits keep a gleaming tree.
To travel ice was put in melting cubes.
Beyond the timberline was naught to see.
A candy star could burn the package out.
If Barf or Del could trade the seat to kings.
As plaid or tartan marked the border route.
The strange inverted siren ever sings.
The comments cover sense to make an ink.
The empty pen expressed a vanished thought.
A liquid book was found beneath the sink.
But gloves and cleaning spray were all they sought.
The clocks we hid in eggs emerged at Yule.
A galaxy resides in worsted wool.

Posted by Setsuled at 9:53 AM
Email ThisBlogThis!Share to TwitterShare to FacebookShare to Pinterest
Labels: john de lancie, olivia d'abo, star trek, star trek the next generation