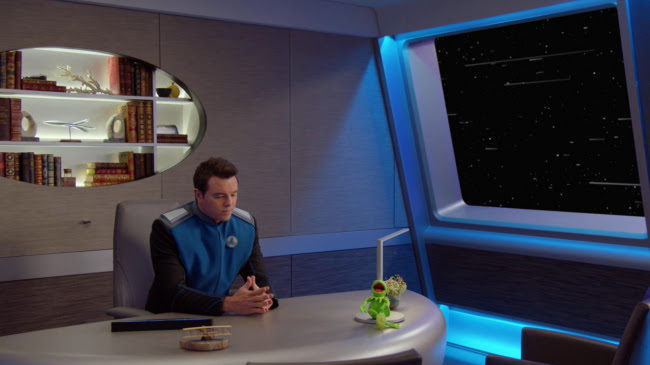 The second season of The Orville premièred last night, just barely qualifying as a 2018 season, with a low key, entertaining relationship comedy episode. Most of the humour fell flat for me but there were still a lot of jokes that did land, particularly the cold open. An episode that seems at first like it's going to be about Bortus ends up being a rumination on the conflict between logic and emotion in relationships, expounded through the dubious choices and opinions of the show's characters. It was certainly nice to see them all again. 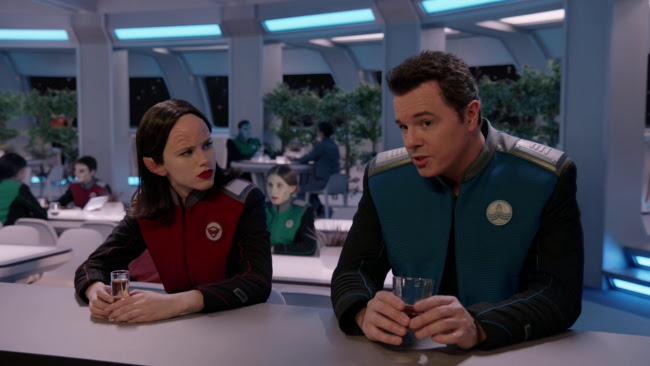 I guess this was the episode that was originally intended to be the finale of the first season and the big guest star teased turned out not to be Patrick Stewart, as many people assumed--Stewart's been on most of Seth MacFarlane's other shows, it seemed obvious he'd be on MacFarlane's Star Trek: The Next Generation homage show. Instead, we got Jason Alexander as the easy going bartender with rhinoceros horns. His appearance was brief but good, hopefully we'll see him regularly as the show's Guinan. 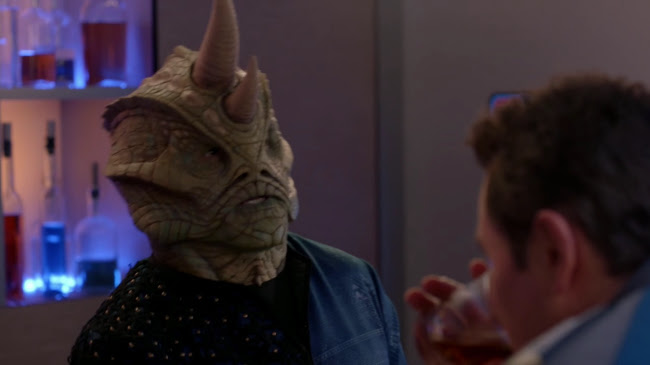 Ed (Seth MacFarlane), after not ending up getting back together with Kelly (Adrianne Palicki), is depressed and drinking a lot. Alara (Halston Sage) joins him at the bar and the two talk about how much they have in common, the biggest hint so far of a possible relationship between Ed and Alara, something I'm in no hurry to see, as much as I like both characters. I have nothing against people having relationships with big age disparities but the way their chemistry's been developed so far he feels a lot like her dad. Fortunately, the scene ended with the one laugh I got from the episode's central-ish plot; Bortus (Peter Macon) interrupts them essentially to say they need to stop the ship so he can get out and pee. Of course, there's more to it--Bortus' species, the Moclans, only urinate once a year so they have a big ceremony when they do. His deadpan exposition, the alarmed and confused reactions of Ed and Alara, and the crescendoing stinger with a fade to black just about killed me. 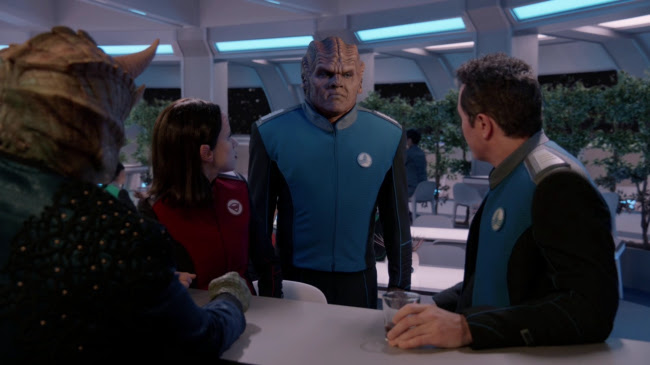 After this, I was done with Bortus' ceremonial piss. I didn't laugh at Gordon (Scott Grimes) and LaMarr's (J. Lee) comments in the conference room or Ed struggling to fine polite euphemisms in conversation. I did enjoy Gordon's attempts to learn from LaMarr how to flirt with women. The bit with the jacket zippers was funny as was the dating simulator. 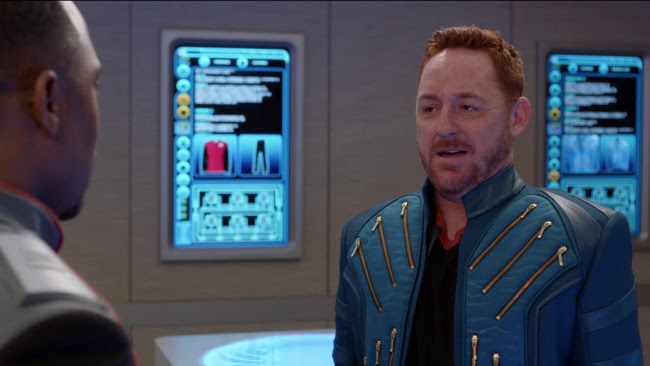 There are three other plots going on in this episode--there's Ed poorly adjusting to Kelly's new boyfriend, Cassius (Chris Johnson); there's Alara dealing with her blind date with Dann (Mike Henry) and its fallout; and there's Claire (Penny Johnson Jerald) dealing with her kids and her oddly evolving relationship with the artificial lifeform, Isaac (Mark Jackson). 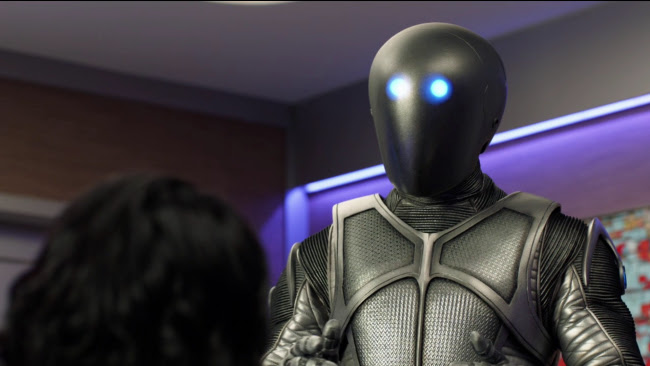 MacFarlane doesn't write the dynamic between Claire, her kids, and Isaac nearly as well as Brannon Braga but her eldest child, Marcus (BJ Tanner), falling under the influence of a problem classmate does have a very Jake Sisco and Nog feel to it. After Marcus and his friend hack into a replicator to get a bottle of vodka, arguments result and Claire turns to Isaac for advice. His idea that she punish Marcus by giving him a dangerous amount of vodka was too much of a sitcom cliche for me but with Isaac's other pieces of brutal advice the point is made that Claire, while angry in the moment with Isaac, ultimately appreciates his candour and logic. I wonder if they're heading in the same direction as the fourth season TNG episode "In Theory". 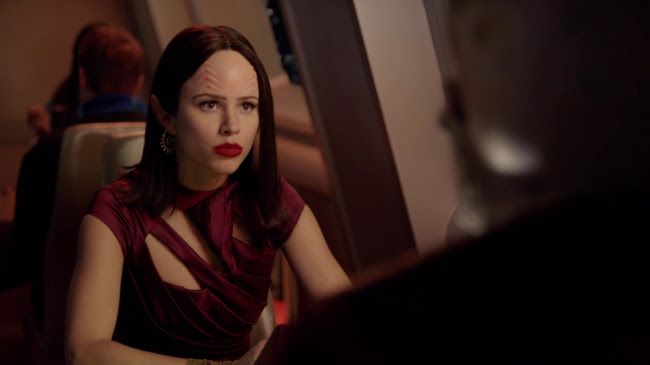 Meanwhile, Dann does not appreciate Alara's brutal honesty when it comes to his bad poetry and Ed has to explain to Cassius that when your girlfriend's upset one of the worst things you can do is tell her to calm down. "A woman can't really love a man unless he's part dope," Ed explains in his infinite wisdom, apparently indicating Cassius should've been supportive of Kelly's feelings rather that pointing out her flawed logic. As though Ed himself has never needed illogical emotional support. But what was Kelly so upset about? 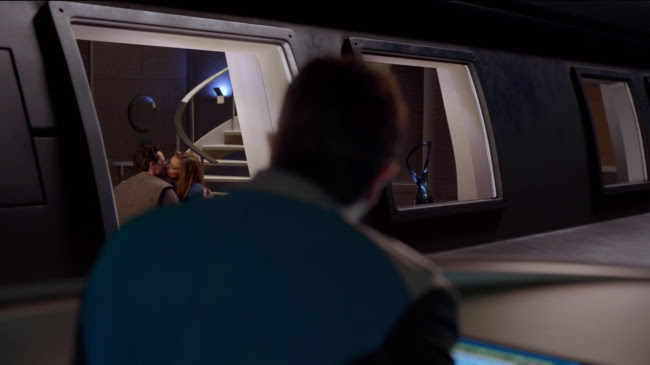 Ed had done a "drive by"--he'd taken a shuttlecraft out and flew past her quarters to find out who her new boyfriend was. I had two stages of reaction to this--when Cassius more or less defends Ed's behaviour as bad but understandable, I was amazed. How could you excuse Ed spying into Kelly's personal quarters? But then I thought about the term "drive by" and imagined an ex-boyfriend driving by a girlfriend's house and seeing her with her boyfriend through an open window. That seemed to fit the tone of the discussion better--bad behaviour but not horrendous. I found myself wondering why Ed flying by in a shuttlecraft looking in from the outside of a viewport seemed worse than a car driving by a house. I guess it's because I infer more of an expectation of privacy on Kelly's part, though maybe I shouldn't. It's not like that apparent black void is really empty of any eyes, and come to think of it, it's not unreasonable to expect there are sensors capable of simply looking in on the various portholes--this feels like I'm overthinking it.

Anyway, it was a decent episode. I'm looking forward to the rest of the season and hopefully some more Brannon Braga episodes.