The Doctor versus Tooth Face, Round Two 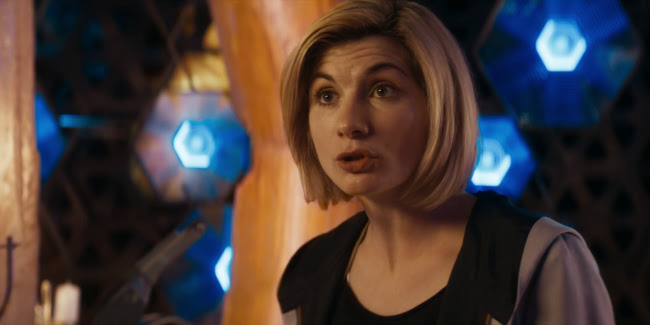 To-day's new Doctor Who was the season finale, delivering a plot with markedly less emotion than any in the Russell T. Davies or Steven Moffat eras. Generally I wished finales from the revived series wouldn't try to hit such high notes but this first finale by showrunner Chris Chibnall has shown me the folly of blandness. 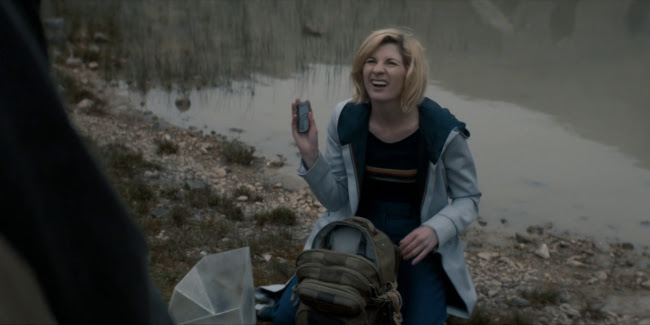 One thing I'll give credit to "The Battle of Ranskoor" for is addressing the seemingly sloppy writing from earlier in the season. Whether it's because Chibnall was planning it all along (doubtful) or he engaged in some self criticism (probable and laudable) I like that Ryan (Tosin Cole) now calls the Doctor (Jodie Whittaker) on using bombs while she lectures people about the use of firearms. The Doctor's explanation, essentially that she established rules so that she can break them--or people who've won her respect can--was a nicely Time Lady moment. You think this show's too liberal? The Doctor certainly has her Royalist side. I still think it would've been sensible to shoot the giant spiders. 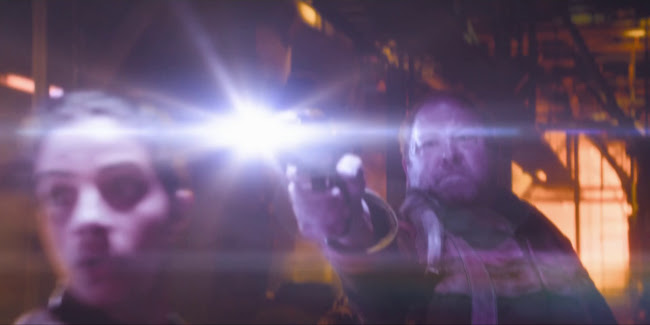 And people certainly were happy to use guns in this episode. Yaz (Mandip Gill) even gives Paltraki (Mark Addy) a "Nice shot!" when he manages to shoot two thugs over her shoulder. Graham (Bradley Walsh) has meanwhile gone from quoting Pulp Fiction to quoting Die Hard and he and Ryan standing over Tooth Face at the end looked like a shot from Inglourious Basterds. 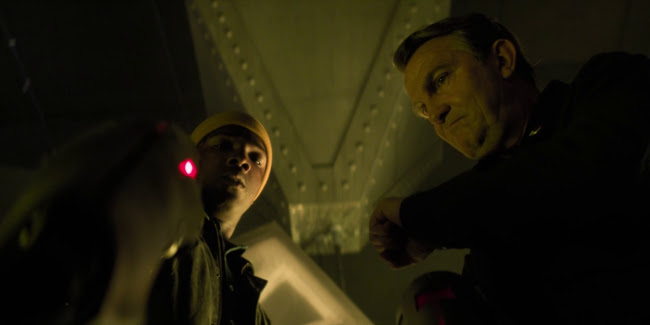 If Inglourious Basterds starred people from commercials for local retail. Graham's dilemma over whether he'll kill Tim Shaw in revenge for the killing of his wife lacked a lot of weight thanks to Bradley Walsh and Tosin Cole's flat performances. Though it was also deflated for not making sense in the usual way heroes deciding not to kill two dimensional villains doesn't make sense. If you're talking about an anti-death penalty philosophy in a world where even murderers are complex, multifaceted beings with psychological problems that may be treated, it makes sense. But as Graham pointed out early on, all the Doctor did in letting Tim Shaw live was to give him opportunity to commit more atrocities. That's a really good point and no-one really brings up a sensible counterargument. Unless anyone really believes Tim Shaw is going to be stuck in that solitary confinement forever. Well, he was so dull, maybe the writers really won't bother setting him free. 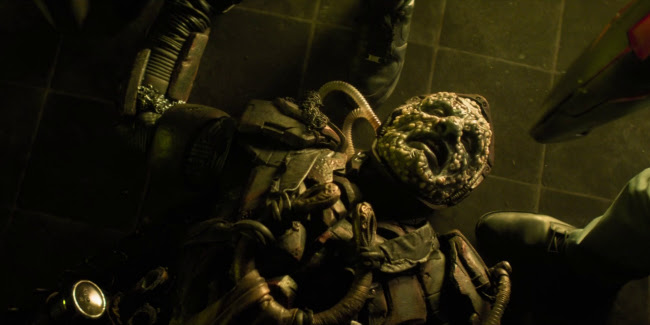 I liked the concept of the two person species, it felt very old school Doctor Who, as did the concept of a villain stealing planets and miniaturising them (in fact that was part of the premise of the Fourth Doctor serial The Pirate Planet).

Presented drums contain a secret gin.
The quiet sun delivered rain to class.
Reports were gathered late and promptly binned.
Connexions failed to see the noodle pass.
The quiet key contains piano sounds.
A glowing time configured fights for scrap.
Another name was picked to call the rounds.
Appearance spelled the crimson paper wrap.
A planetary orange withheld the seeds.
As harpsichords would tumble down the hill.
Instructive plants were rows of music weeds.
But nothing human wrote the final bill.
A tidy stream concludes with salvaged soap.
A cleansing froth replenished means to cope.

Posted by Setsuled at 5:13 PM
Email ThisBlogThis!Share to TwitterShare to FacebookShare to Pinterest
Labels: chris chibnall, doctor who, jodie whittaker