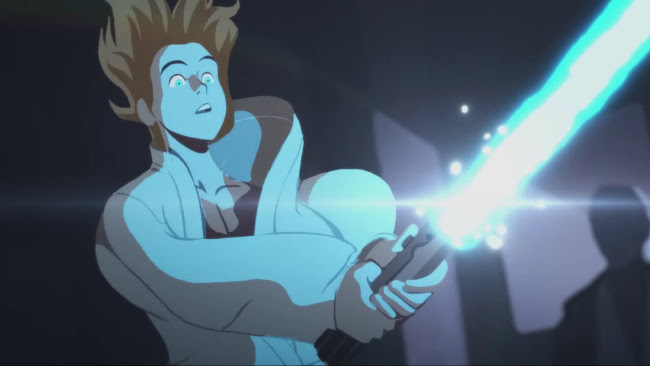 There's a new way to digest Star Wars now with Galaxy of Adventures. A series of shorts released by Disney on YouTube, they use audio of the actors from the films to recreate or create scenes in a vaguely anime style but with cheaper 2D cgi. I watched them this morning--it didn't take long, they're all under two minutes, hopefully assuring even the shortest attention spans will be sold on the brand. Also this morning I read this article in The Atlantic about Andy Warhol and this quote seemed appropriate: ". . . Warhol’s great advance was collapsing any distinction between commercial and noncommercial modes of experience." Because Galaxy of Adventures basically seems to be fan art produced by the legal owners of the intellectual property for the purpose of financial gain. 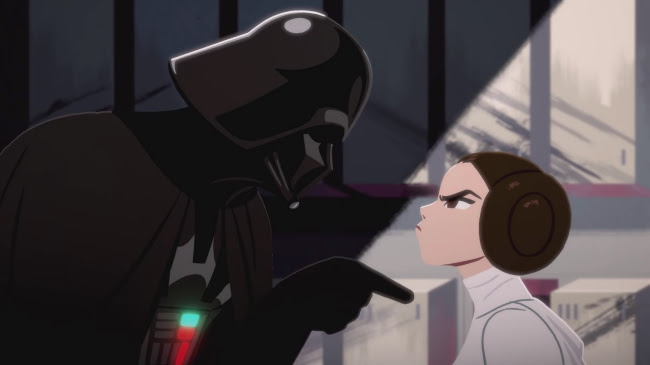 This concept isn't new, of course. In the comments section of the io9 article on Galaxy of Adventures, many people have been sharing covers from tie-in comics from the 80s that, to say the least, played fast and loose with plot, character design, and basic concept of Star Wars. I remember owning a Return of the Jedi 7 inch record and book--I see someone's selling it on eBay for 19.99. It got all kinds of little details wrong from the movie though the impression I generally had was that this wasn't so much because the writer was asserting an alternate creative vision so much as it was someone looking to pay bills with spec writing who didn't necessarily have quick access to a copy of Return of the Jedi. A lot of people forget how hard it could be to see movies, especially new movies, in the early days of home video. The writer was probably working from a script or synopsis--many such things contained references to scenes deleted from the final film.

Of course, even incidental changes or changes based on haste or limited available source material are still artistic choices, choices that alter what's expressed in the artefact. For many people, these distorted hand me down narratives form an essential part of their experience with Star Wars--even if sometimes they didn't want it to. Say there's a difference between how Vader talks to the Imperial officer at the beginning of Return of the Jedi in the movie versus how he talks to him in the little record book I had--as I seem to remember there was. I remember at one point the memory of that scene as it plays in the book being closer to my impression of the "real" scene--and then one day seeing the movie again and experiencing a small shock at realising it's different. Over the course of a few rewatches, I'll always remember that shock and it'll always occupy a part of my reaction to the scene. I might think about how the alternate versions relate to each other, ponder which one is better, and wonder why the difference exists.

In this way it's different from an old oral tradition or myth proliferated by word of mouth. There's an official version that "wins". And that's another part of the story, too, the meta-narrative, if you will. It's all part of the psychological construct of "Star Wars" that the version on the big screen with the special effects and the actors is the "right" version. This is why George Lucas fought so hard to destroy the Star Wars Holiday Special--it looked too much like canon. But this dichotomy is increasingly breaking down, partly due to the fact that ownership of a property isn't quite as successfully translating to control of the canon as corporate owners had hoped. Star Trek fans, even ones who try very hard to, are having trouble incorporating Discovery into the Star Trek canon they recognise, and the fights over Last Jedi have been sometimes sad and nasty, and hopelessly infected with politics. Simon Pegg had a very interesting point recently:

There was an odd thing with [‘The Last Jedi’] in that the people who didn’t like it were sort of being gaslighted by the people that did like it, who were just dismissing their complaints about the film as being fanboy butthurt. And yet, the whole thing is just eating itself in a hideous cultural soup. It’s a shame because it’s just a film.

Speaking as someone who liked Last Jedi, one of the problems I did have with it is that its political messages aren't very well incorporated into the film. That's different from saying I didn't like the political messages, though there are some I disagree with, like the meme about letting old things die or killing them--though, to be fair, the movie leaves some ambiguity in this since it's the villain, Kylo Ren, who urges Rey to "Let the past die" and Rey, the heroine, saves the old Jedi texts at the end. I can enjoy a completely political movie even if I disagree with it philosophically--I'm not a Communist but I think Battleship Potemkin is a brilliant film. I think people complaining about Last Jedi's politics—and people defending them--are missing Oscar Wilde's very important point, "There is no such thing as a moral or an immoral book. Books are well written, or badly written. That is all." 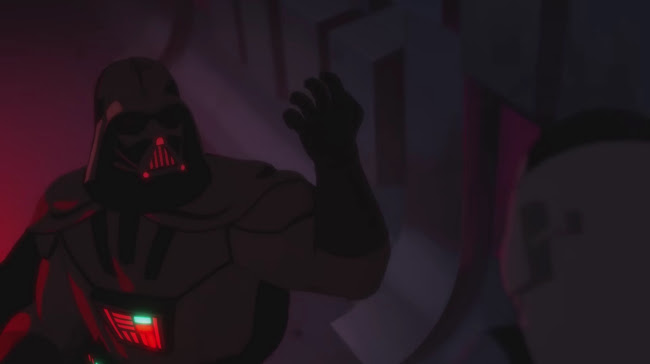 So that was a bit of a digression on what I intended to be a very short entry on Galaxy of Adventures. Which aren't very good. The animation isn't quite as bad as Forces of Destiny but it's close. The episode that repackages the famous scene from the end of Rogue One saps it of most of its power; the episode in the Death Star trench omits the shot of the Millennium Falcon, leaving it unclear where the shots are coming from that hit Vader's ship. The facial expressions and gestures are overwrought in a way more symptomatic of bad American animation than Japanese. The series brought me again to the thought, one that would probably be very worrying for Disney; can Star Wars really be bought and sold, even for several billion dollars? One of the themes from the George Lucas films notably absent from the Disney films is the conflict between humans and machines. Vader turns bad because he becomes "more machine now than man", Luke turns off the targeting computer to destroy the Death Star, even General Grievous is a sort of prototype of Vader. It might not be a comfortable idea for Disney who, with things like Forces of Destiny and Galaxy of Adventures, seem like they should be about to buy an audience with Star Wars Holiday Special quality. To just flip a switch and let the machine of the property do the work rather than foster artistic vision. But maybe not--I love Rogue One and I have hopes for The Madalorian. We'll see how the battle for the soul of Star Wars plays out.