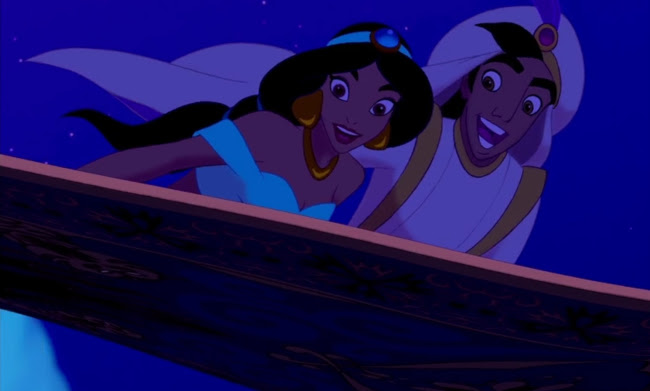 Who could possibly expect a penniless street urchin to make it with a girl who grew up in wealth and splendour? Anyone who saw Lady and the Tramp, The Aristocats, and possibly The Rescuers and The Black Cauldron, I guess. So while the third film in the Disney Renaissance (I'm not counting The Rescuers Down Under) in some ways continued the path into new territory, 1992's Aladdin was also a return to some very familiar territory. What sets it apart, and makes it part of the Renaissance, was that its story was very focused on human characters and their romance. With Tim Rice taking over for a deceased Howard Ashman on lyrics, Alan Menken returned once again for some fantastic songs and the animation is generally better than in Beauty and the Beast--its cgi is present but less conspicuously dated. Glen Keane animates Aladdin, the character with the most screentime, and all the other animators seem well matched with their characters. Altogether, Aladdin is an exciting romantic adventure film with enough heart to easily overshadow the weaknesses in its screenplay. And it has a great voice cast.

For many people, the movie's best known for Robin Williams in his role as the Genie. I like Robin Williams though I actually like Gilbert Godfried as Iago a lot more. Godfried was really inspired casting.

Williams' improvisational style and rapid pop culture references present a tonal difference to earlier films in the Disney canon and are somewhat at odds with the rest of Aladdin itself. Though the Genie's spontaneous use of anachronistic props like cars and microphones don't undercut the tension as much as the inconsistent rules regarding the power of genies. 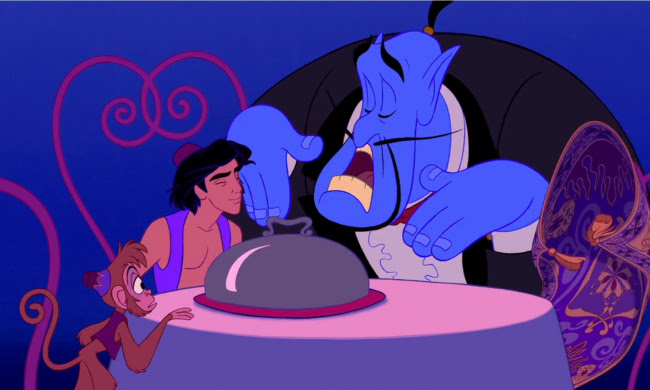 Aladdin (Scott Weinger) amusingly tricks the Genie into saving him from the Cave of Wonders without using up a wish but then later it's not clear why the Genie has to use up a wish when rescuing an unconscious Aladdin from drowning. At the end of the movie, Aladdin outsmarts the villain, Jafar (Jonathan Freeman), on the premise that turning into a genie would trap Jafar in a lamp, despite the fact that being trapped in a lamp is not a consistent feature in genie mythology. 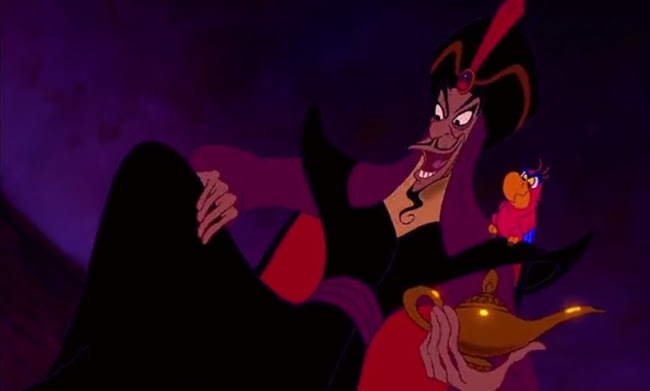 But that sums up all the complaints I have about the film and not one of them is a deal breaker. The songs are fun, the characters are sweet, and the romance is sexy. This was my favourite Disney Renaissance movie when I was in high school because I thought Jasmine (Linda Larkin) was the hottest Disney princess. Nowadays, I'd give that crown to Ariel, but Jasmine has a fetching slyness about her. I love her animation when she uncovers Prince Ali's secret identity. 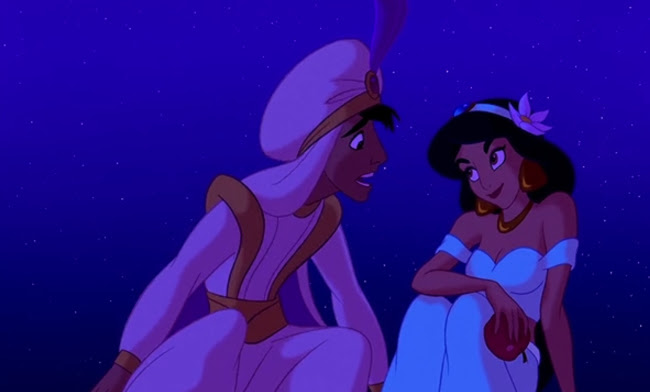 Ah, an apple, your classic symbol for female misbehaviour, tongue in cheek or otherwise.

She doesn't grab your interest as much as Ariel does, but that's fine, because the movie's more about Aladdin, but her motives are a lot clearer than Belle's. Jasmine wants the freedom to choose her own husband and is generally sick of the rules imposed on her. That's a lot clearer than Belle's vague desire to escape her charming little village in the French countryside. Considering Prince Eric wasn't a very well established character in The Little Mermaid, and Bianca was pretty one-note in the Rescuers movies, Aladdin is the first Disney animated film since Lady and the Tramp that really feels like it's about a relationship, about two people who are attracted to each other and discover an unexpected sympathy. 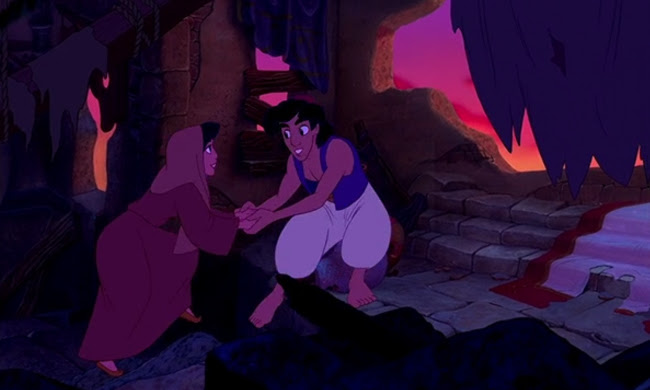 Mostly it's the sexual chemistry, the way the two physically play off each other, but there is a moment in Aladdin's shabby--but admirably spacious--cobbled together apartment where they both say the word "trapped" together. Both of them seek freedom and both of them initially see that freedom in the other's world. The "Whole New World" sequence gives them a breakthrough where they discover the freedom they seek doesn't exist in a life of poverty on the streets, or in a life of wealth in the palace, but on a magic carpet high above the clouds. That's how you get away from it all. How does this apply to me or you, watching the movie? Well, your creative interpretation is certainly free to provide the answer. 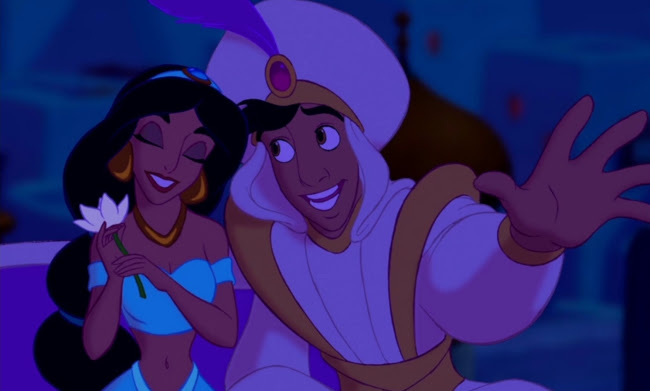 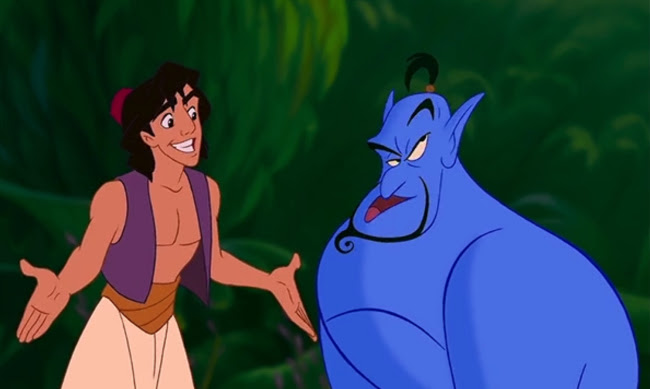 Something that really drew my attention this time was Aladdin's propensity for lying, his reluctance to reveal the truth behind the "Prince Ali" facade. This may be just an idiot plot device but I've met so many young people who constantly lie about themselves now that it kind of resonated. And I don't just mean people from L.A. lying about the extent of their Hollywood connexions (I've met a few of those). Just about any college aged kid or recent graduate can't wait to really obviously inflate their resume as just part of a casual conversation. It's kind of exhausting. Maybe Aladdin will help me to be a little more patient with them in the future. 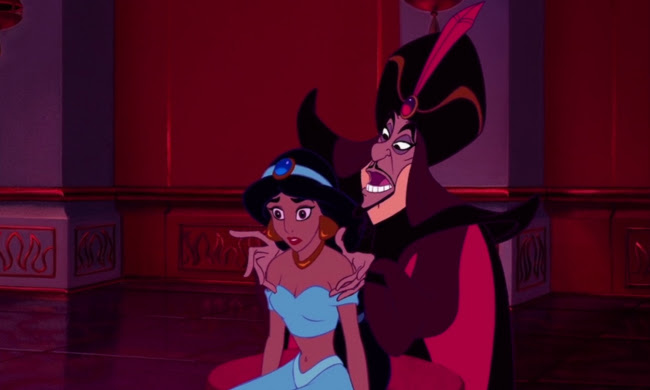 I thought it was a little known fact that Disney's Aladdin cribbed a lot from the 1940 Thief of Bagdad but references to this are all over the Wikipedia entry, including cited sources showing the film's screenwriters and producers quite candidly talking about it. The Thief of Bagdad is a much more beautifully written film, though. Jafar's desire to marry the Princess in The Thief of Bagdad is much spookier and more fascinating and Conrad Veidt gives a magnetic performance. And Sabu as Abu is so much better than a monkey could ever be. 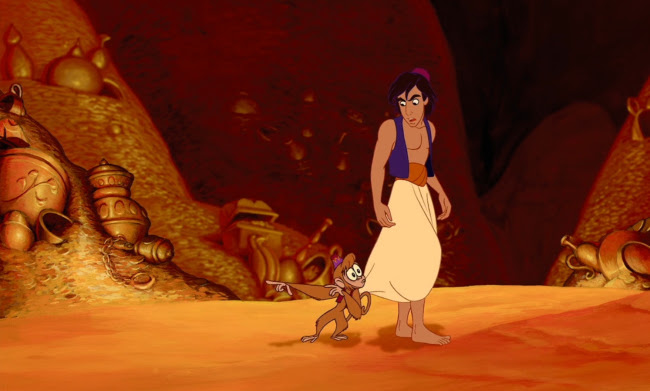 The monkey is one of the things that make me think this film drew quite a bit from the Indiana Jones movies--he reminds me of the monkey from Raiders of the Lost Ark, and a lot of the Cave of Wonders stuff is reminiscent of Temple of Doom.

It all ties together, though, for a unified style in Aladdin. The film presents a delightful Arabian fantasy world, a wonderful place to go for about an hour and a half.

Aladdin is available on Disney+.

This is part of a series of posts I'm writing on the Disney animated canon.

Snow White and the Seven Dwarfs
Pinocchio
Fantasia
Dumbo
Bambi
Saludos Amigos
The Three Caballeros
Make Mine Music
Fun and Fancy Free
Melody Time
The Adventures of Ichabod and Mr. Toad
Cinderella
Alice in Wonderland
Peter Pan
Lady and the Tramp
Sleeping Beauty
101 Dalmatians
The Sword in the Stone
The Jungle Book
The Aristocats
Robin Hood
The Many Adventures of Winnie the Pooh
The Rescuers
The Fox and the Hound
The Black Cauldron
The Great Mouse Detective
Oliver & Company
The Little Mermaid
The Rescuers Down Under
Beauty and the Beast