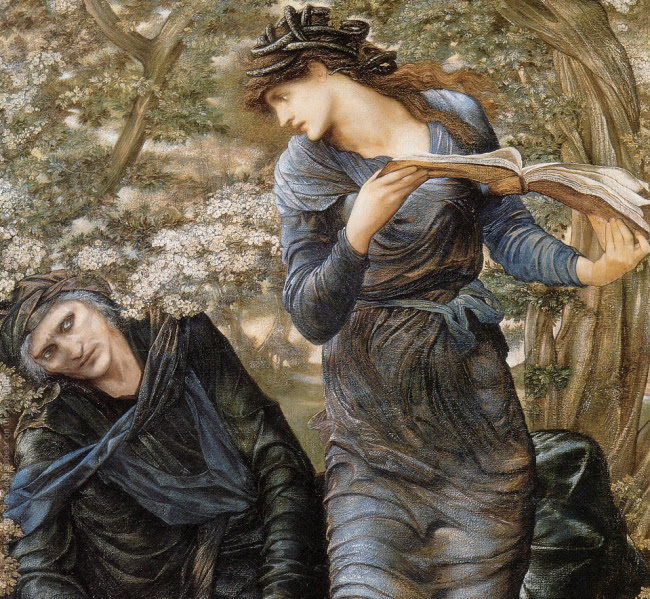 Lately I've been reading Alfred, Lord Tennyson's Idylls of the King on the train. Generally I think this book, published in volumes over decades in the 1800s, is a better way to read the main narrative of the Arthurian legends than the more often cited Le Morte d'Arthur. Tennyson is just a better poet than Malory--he's also not as repetitive.

To-day I read Merlin and Vivien, the story of the Lady of the Lake (one of several, according to Malory) who seduced and trapped Merlin. In Excalibur, the John Boorman movie, this job is given to Morgana/Morgan le Fay, a nice bit of story-telling economy.

Tennyson's version of the story is quite different to Malory's. Malory describes Merlin as being aware of his doom but being mysteriously unable or unwilling to avoid it.

Also he told King Arthur that he should miss him,—Yet had ye liefer than all your lands to have me again. Ah, said the king, since ye know of your adventure, purvey for it, and put away by your crafts that misadventure. Nay, said Merlin, it will not be; so he departed from the king.

After this, Malory tells us how Merlin took the Lady--called Nimue in this version--on his travels, constantly trying to talk her into losing her virginity with him. In Tennyson's version, Vivien is shamelessly trying to seduce Merlin to get him to teach her a powerful charm.

There lay she all her length and kissed his feet,
As if in deepest reverence and in love.
A twist of gold was round her hair; a robe
Of samite without price, that more exprest
Than hid her, clung about her lissome limbs,
In colour like the satin-shining palm
On sallows in the windy gleams of March

You won't see a description like that in Malory.

It's hinted that Merlin has some dim sense of foreboding but doesn't seem to identify Vivien as the agent of his downfall. He also doesn't seem much convinced by her gratuitous protestations of devotion, especially after she can't resist scornfully repeating every tale of deviance she can remember about Arthur's knights. Merlin's description of her to himself is pretty amazing and I'd say reminiscent of many people on the Internet:

And they, sweet soul, that most impute a crime
Are pronest to it, and impute themselves,
Wanting the mental range; or low desire
Not to feel lowest makes them level all;
Yea, they would pare the mountain to the plain,
To leave an equal baseness; and in this
Are harlots like the crowd, that if they find
Some stain or blemish in a name of note,
Not grieving that their greatest are so small,
Inflate themselves with some insane delight,
And judge all nature from her feet of clay,
Without the will to lift their eyes, and see
Her godlike head crowned with spiritual fire,
And touching other worlds. I am weary of her.