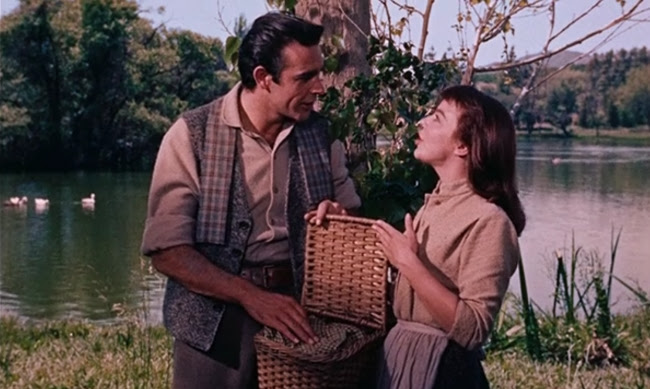 I'm calling to-day the second day of Saint Patrick's Day--yesterday was March 17 here in Japan and now that it's the 18th for me it's the 17th for the western world. So I'm calling this a two day event. I indulged in the popular fantasy of Ireland last and watched Darby O'Gill and the Little People. I still marvel at the effectiveness of the special effects to make the leprechauns look small. 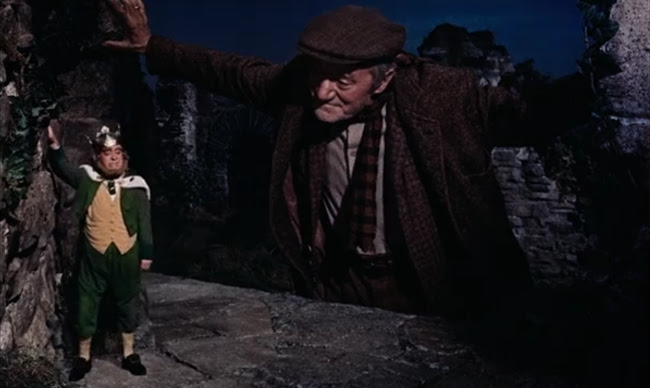 The Lord of the Rings movies really owe a huge debt to this one.

One of the few things I know how to cook is boxty--Irish potato pancakes made by mixing mashed potatoes with flour, grated potato, and egg, and frying the batter like normal pancakes (but five minutes for each side of each pancake). Last night I experimented and boiled and mashed cabbage along with the potatoes. I added lemon, thyme, and diced raw onion to the batter. As usual I splashed the finished cakes with Tabasco sauce and added butter and cheddar cheese. They were really good.

It's a bit ironic I'm enjoying a double Saint Patrick's Day for living in Japan since most people seem never to have heard of the holiday around here. Many people don't even distinguish Ireland from England--the Japanese word for Great Britain is イギリス--pronounced "Igirisu" or "English", something many people from Scotland or Northern Ireland might not like (I can imagine what Malcolm Tucker would say) and of course there's little awareness of the difference between Northern Ireland and the Republic of Ireland. But then again, I'm sure many people in the west can't point to Kyushu on a map of Japan.

I was thinking about all this last night when I was talking to a woman in an online chess club about Saint Patrick's Day. Over the course of the conversation, I realised she had no idea the Republic of Ireland wasn't part of the U.K. This was especially strange because she's claimed to be an Englishwoman living in England ever since I met her some years ago. I've long suspected this was an act--she was always up at the wrong hours and she mentioned the fact that she was English just a little too often. Last night I saw her confidently asserting that all of Ireland was part of the U.K. She also told me that all the Irish people in England are comfortable calling themselves British. Even if that's true, the fact that she felt comfortable speaking for all the Irish people in England was a bit silly, even if she personally knew more than twenty and had spoken to each of them on the topic.

Part of me wonders if she is English because it seems like a fraud would have taken the time to do some minimal research, particularly when this was an online chat with long pauses in the conversation during which she could have easily googled the information. The thing is, this isn't the first time I've run into a young person who seemed ignorant of aspects of the nationality they claimed to be. When I was getting my certificate to teach English as a second language, there was a guy in the programme who claimed to be Australian, despite not having a trace of an Australian accent--he sounded American. Sure, maybe he lost his accent somewhere along the way but there were all kinds of other little signs that he was a fake. One day, I heard someone ask him if Australia really had the enormous spiders people see in viral videos and memes about the country and he replied, "Yes, we have the . . . brown recluse." The brown recluse is native to North America. Like the "Englishwoman", he showed again and again that he was so badly informed about his supposed country of origin as to defy belief, not only that he was from the place in question but that he was actually attempting to pull off a charade with this level of research and preparation. It's led me to believe that this isn't so much an attempt to deceive people as it is an attempt to assert an identity, I guess not unlike Rachel Dolezal, the white woman who claimed to be black for much of her professional life.

It's like people are treating real life like a role playing game. The feeling I have is that it's much more widespread--I mean, I can see the inept pretenders. It stands to reason there must be some people who are good at it.

We searched for suits to end the day in green.
The strangest pair reduced the deck to chips.
Potential dwells in some enchanted bean.
Across a sea the rain refuses tips.
A wild wave reports against the cliff.
In older pictures green resembles black.
The grains have bloomed in ev'ry graphic gif.
The words were writ upon the barley sack.
Reluctant nets would sleep instead of load.
The time a slide would take we'd browse a store.
And on and on, the train retook the road.
Romantic books occasion something more.
A wish from Reaper's coach was granted late.
With gold and whiskey, glad the poacher ate.