Myths in the Future 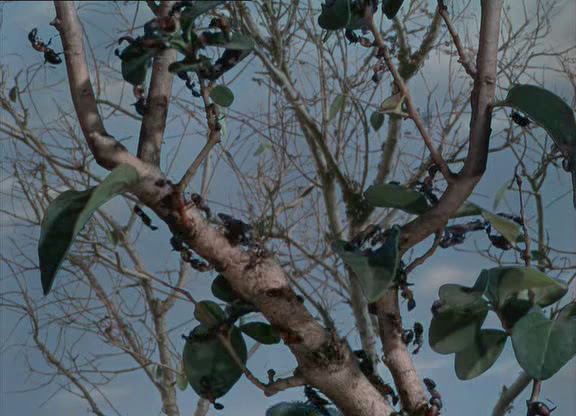 "World of the Myth", a 1964 story by Harlan Ellison, begins as you might expect a story with that title to go, with a lovely description of dragon's breath and fire from the sky. But then it turns out to be a spaceship, crashing on an alien world. And the tale is about three space travellers, two men and a woman, with a very ugly relationship between the three of them. The title turns out to be quite appropriate, though, when they encounter a swarm of ant-like aliens who show them images that distill their essential natures in this fascinating story.

The three are Cornfeld, Iris, and Rennert. The story is told from Cornfeld's perspective, a somewhat meek man described as having long hair as part of a subtext that portrays him as emasculated. Rennert, by contrast, is an aggressive prick whom Cornfeld believes raped Iris. After Cornfeld pulls Iris from the wrecked ship, she wakes up pleading ambiguously for Rennert to stop what he's doing, though Rennert isn't present in the scene. The story never has Iris herself directly claiming Rennert raped her, though, and it remains ambiguous as to whether he actually did rape her or if Cornfeld just sees it that way because of how he resents Iris for being attracted to Rennert.

The ambiguities of perspective are always a complicating aspect of these kinds of things--except, in this story, the alien ants are supposed to do the extraordinary job of removing that ambiguity by reading and rendering--as apparitions--the true nature of the viewer. But even then there's ambiguity because Rennert's vision of devils might mean he's fundamentally rotten or it might mean his instincts run contrary to prevailing mores--and those two things are not the same.

But so are myths open to interpretation, even as they convey truth better than anything.

Posted by Setsuled at 2:37 AM
Email ThisBlogThis!Share to TwitterShare to FacebookShare to Pinterest
Labels: harlan ellison, literature, sci fi, science fiction, world of the myth