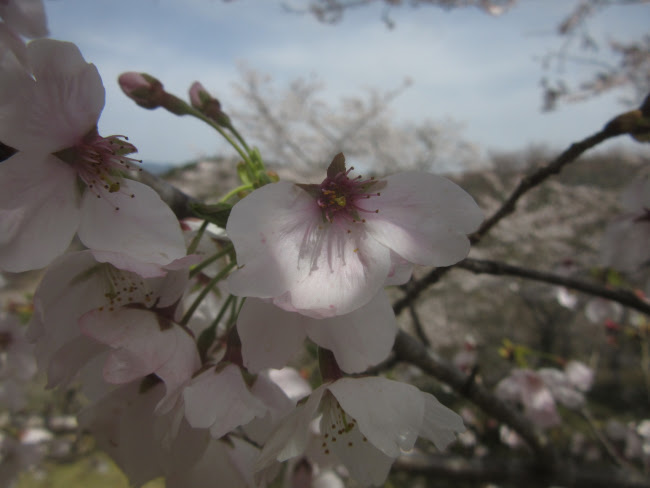 I've been seeing cherry blossoms everywhere lately so I thought yesterday would be a good time to go back to Mount Yoshino. A lot of people had the same idea, I guess, because the train was packed, even though it was a Monday. 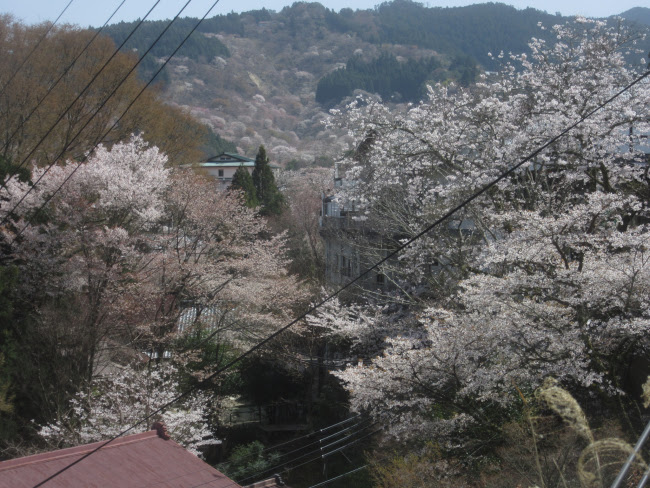 It was definitely a different experience to when I went last month. According to Wikipedia, there are more than 30,000 cherry trees in the area. 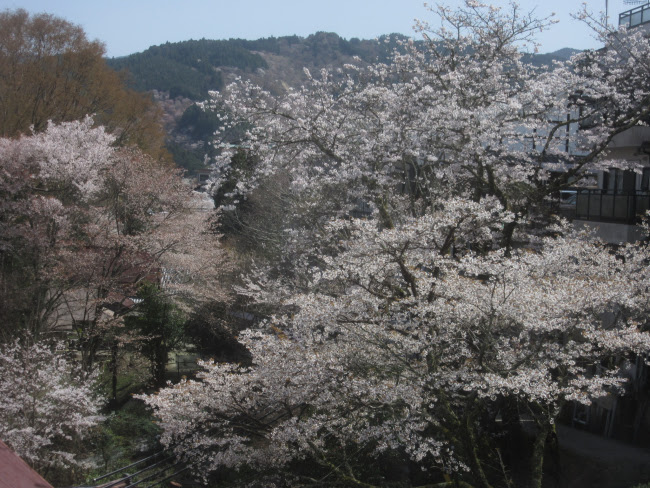 I went up the hillside path that ended in a bridge. 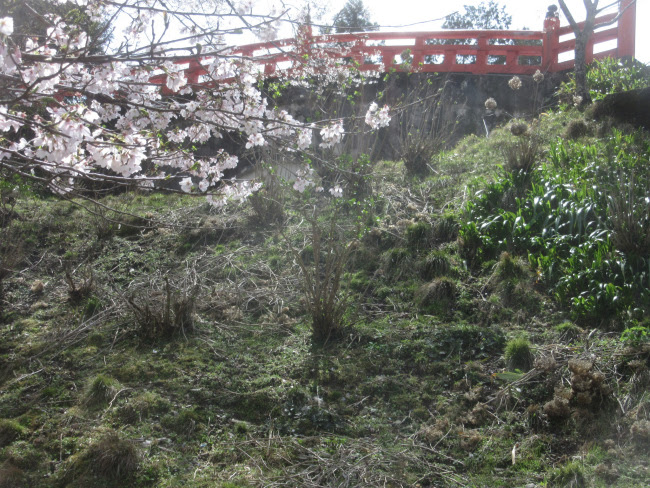 This was part of a street for tourists, filled with shops and restaurants. 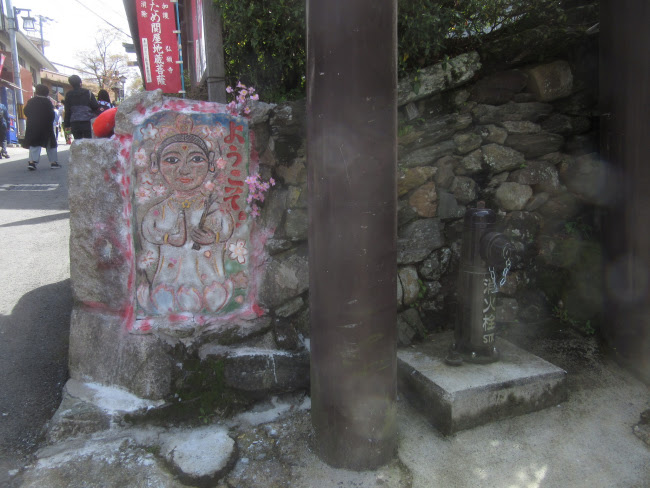 Despite all the people, and the fact that it was around noon, the restaurants weren't very crowded. So I stopped in an udon shop and ordered the "Sakura Somen Set". 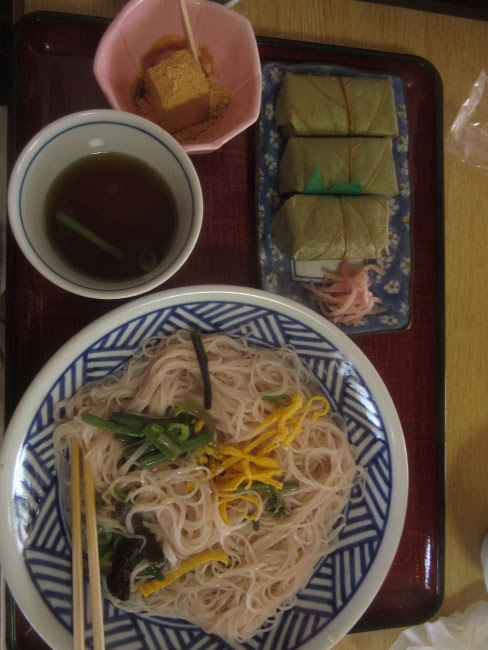 I should've taken a picture when it was all neatly together but I was so hungry I'd already dug in before it'd occurred to me to take a photo. Somen is very thin noodles served cold. Normally they're white but these had a very light pink colour, apparently flavoured with cherries or petals. They were pretty good, anyway. The yellow strips are egg and it also had green beans and mushrooms. The dark liquid in the cup is tsuyu, a dipping sauce served with somen or soba. Wrapped in the leaves are three pieces of sushi (salmon, tuna, and mackerel) and the cube is a kind of jelly dessert called anmitsu. It was a great lunch. 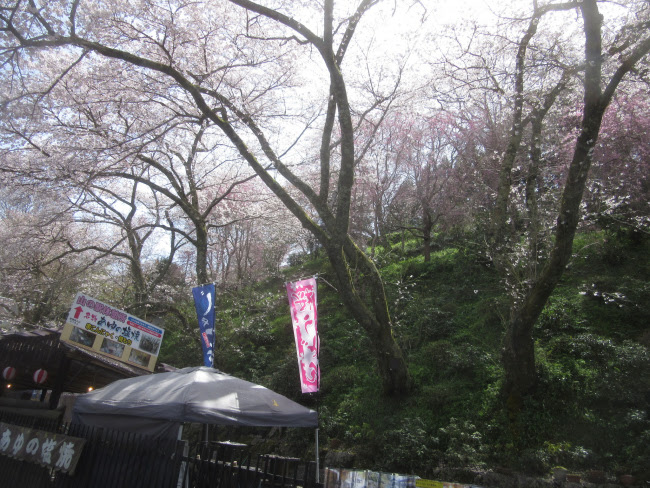 There are a number of temples and shrines on Mount Yoshino. The biggest is the Shugendo temple Kimpusen-ji. 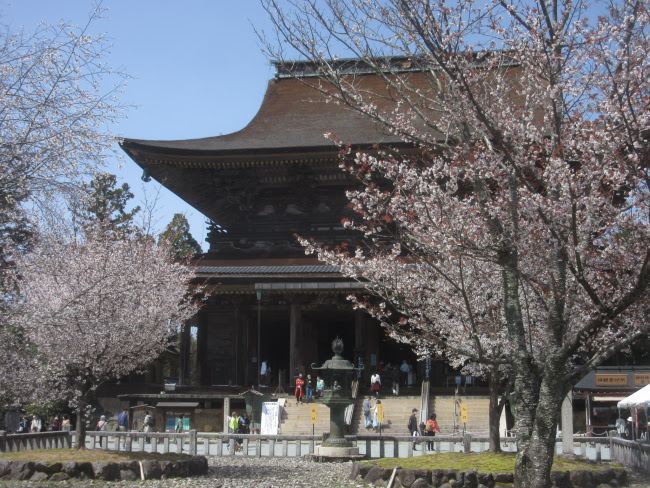 Sure, it was rebuilt in 1592, making it a mere 429 years old. But parts of it are much older so that's still pretty good, right? 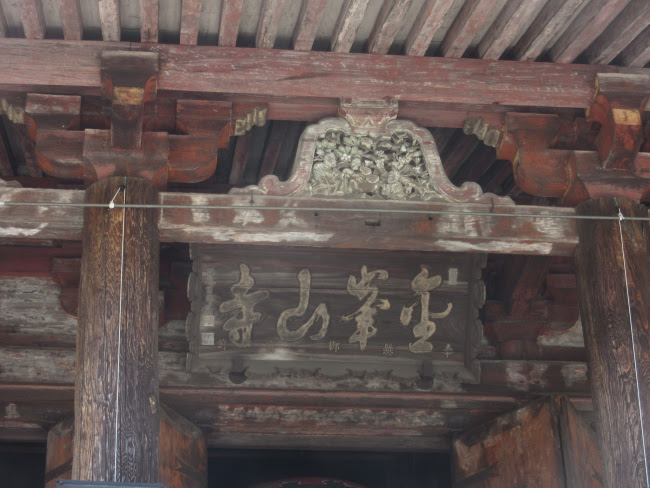 Seriously, though, I'm used to San Diego where something's ancient if it's 150 years old. So many of the structures around here astound me. 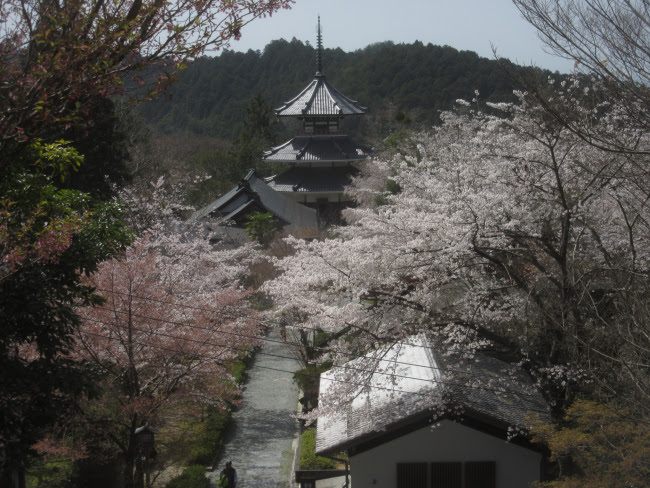 The nearby Buddhist temple had some particularly beautiful cherry blossoms. 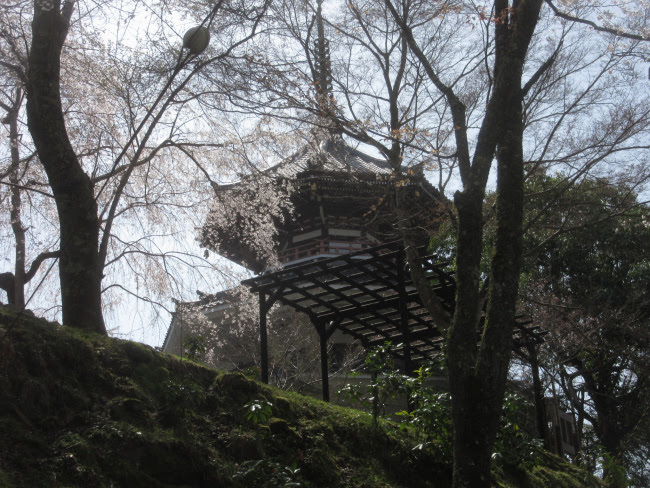 Some of their branches were supported by thin bamboo poles. 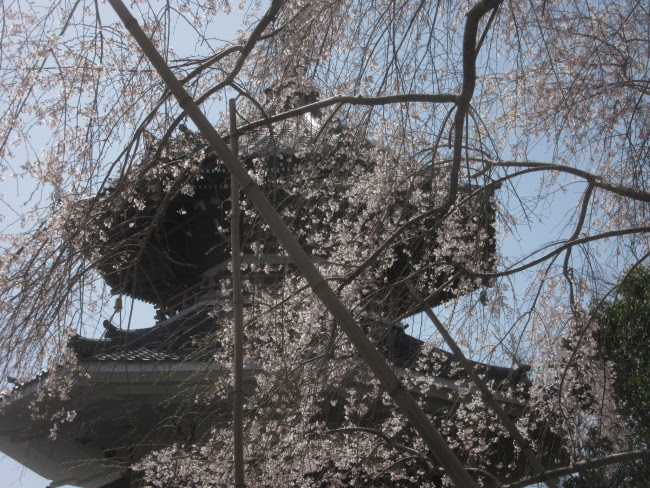 I walked down a path that wound behind the Buddhist temple. 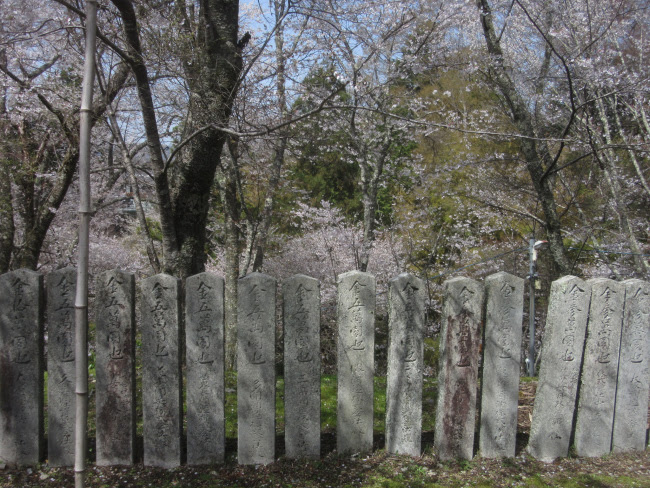 It turned into a steep stone stair I saw few extremely tired tourists coming to the top of. There were no crowds in this area. 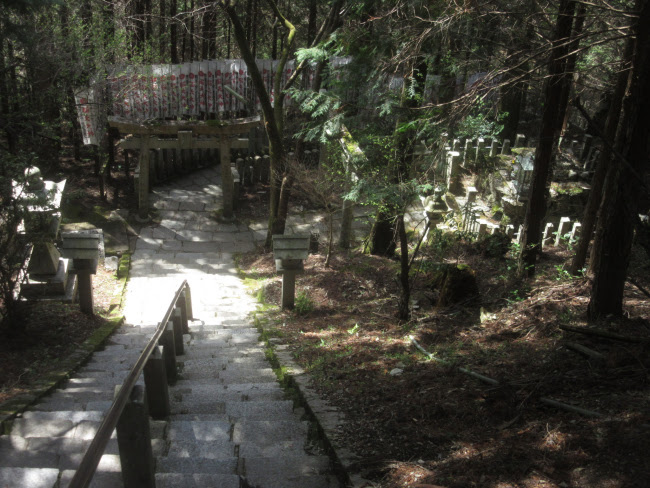 This was only one bend of the stair. It's broken up periodically for small shrines. 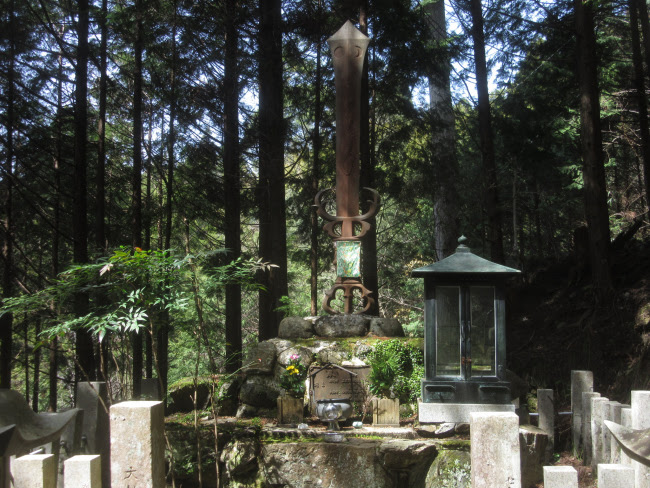 I've noticed there are often small pieces of clothing on the statues. 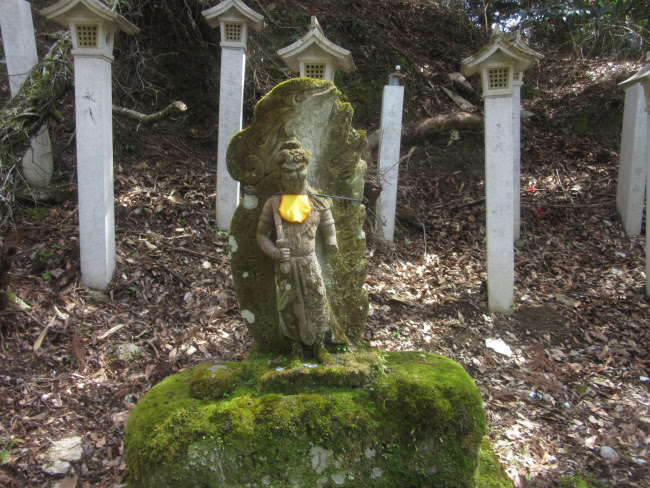 These little foxes were up near the main temple. 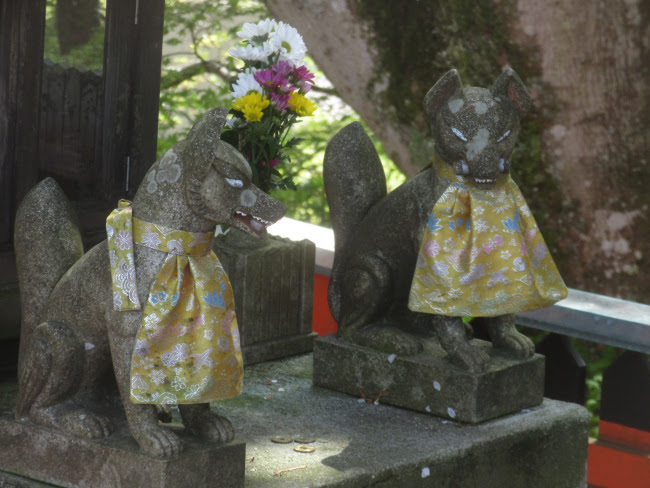 I finally came to the bottom of the stairs. 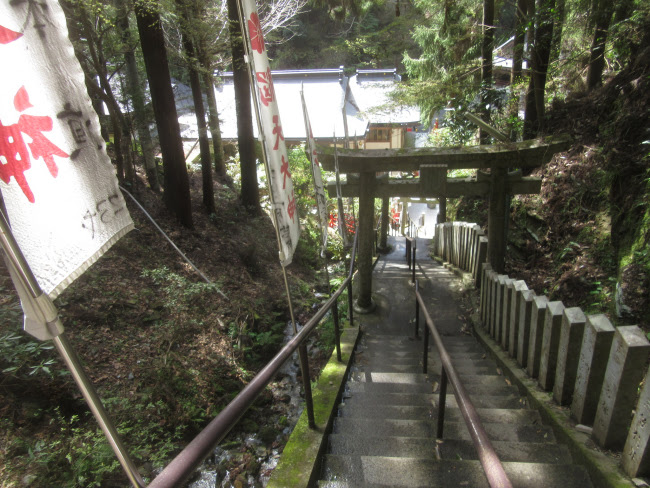 I felt like I'd cheated, coming down the back. It seemed like a test of endurance for the few people I saw coming up the stairs. 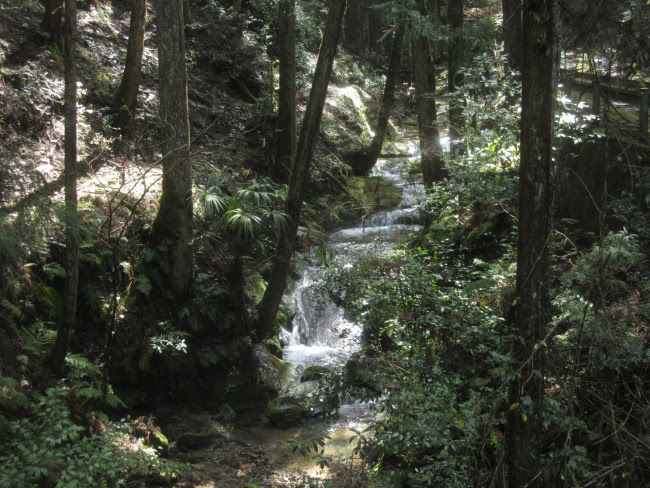 I thought about going back up but I found an intriguing forest path and started walking. Very soon I was totally alone. It was very peaceful. I see now the road isn't even on Google maps. 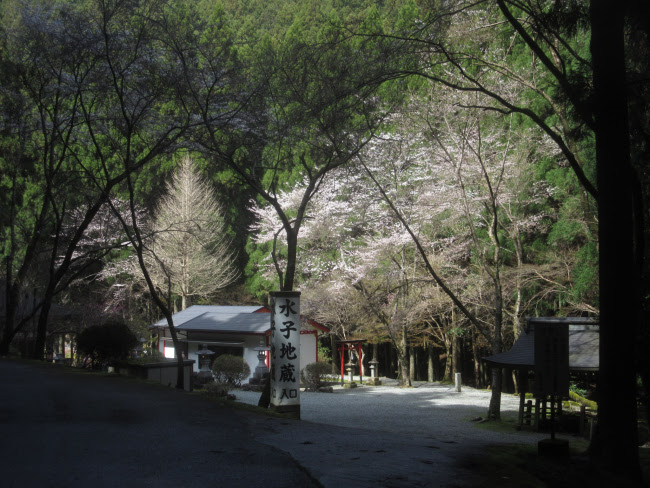 I walked about ten minutes before the path came to this little area, which is where Google maps picks back up. 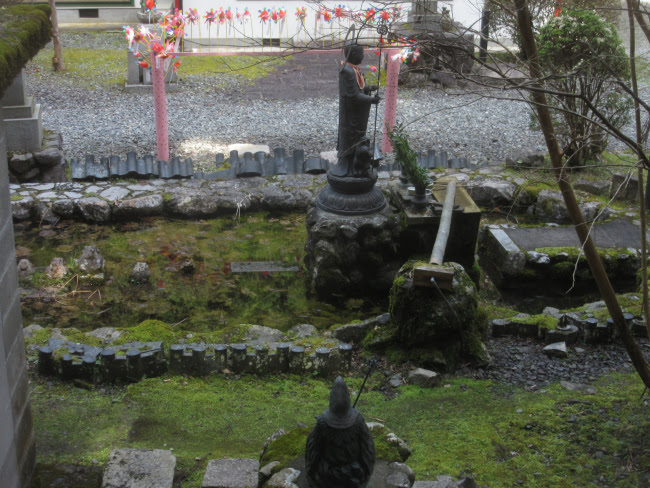 I still didn't see any people about until I spotted one guy on a motorcycle driving away. 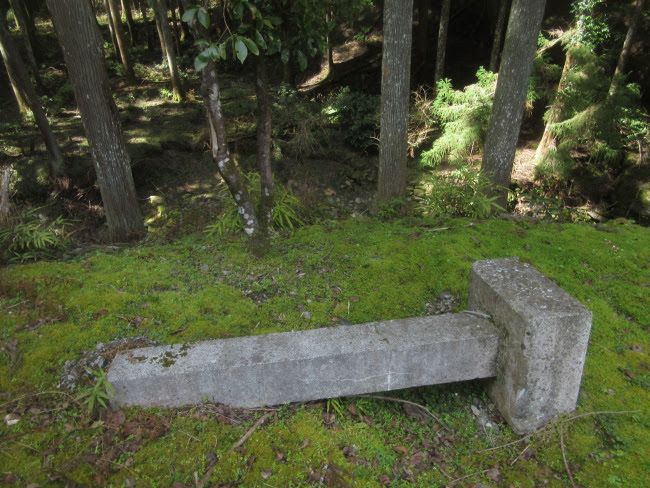 I continued down the road figuring it would end up in civilisation again eventually. I saw lots and lots of trees. 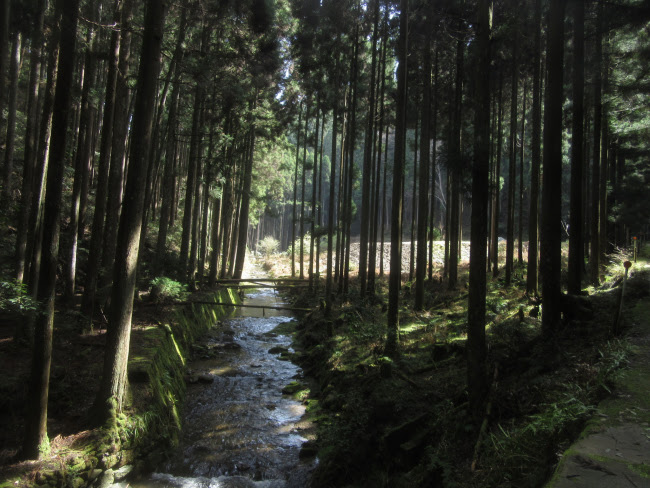 Signs started warning me about falling trees and rocks. 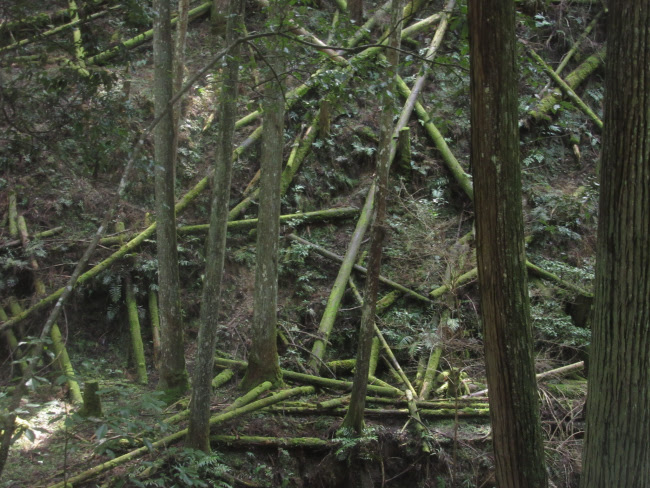 It certainly looked like a tree falling was not an uncommon occurrence. 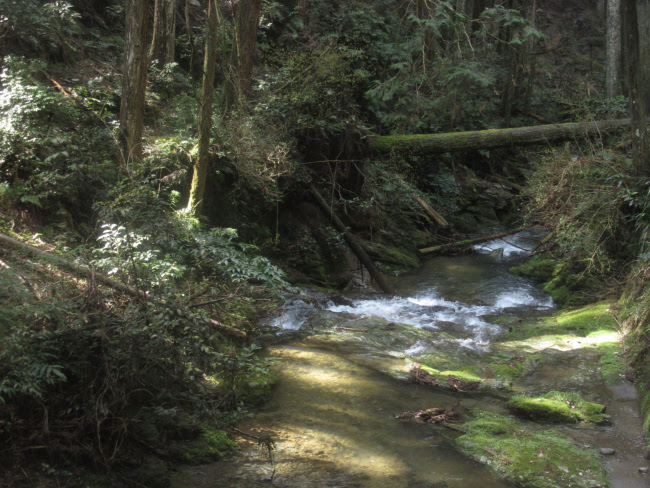 When I finally did start seeing buildings, it wasn't long before, unsurprisingly, I saw signs of lumber industry. 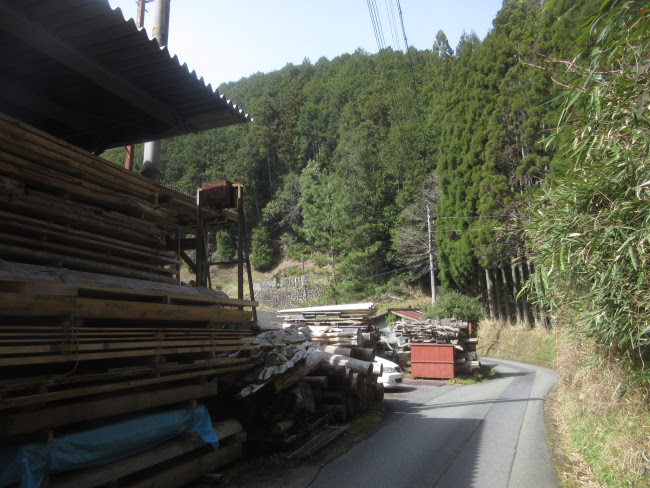 There were plenty of little homesteads, too. I felt a little like I'd found Japan's Twin Peaks. 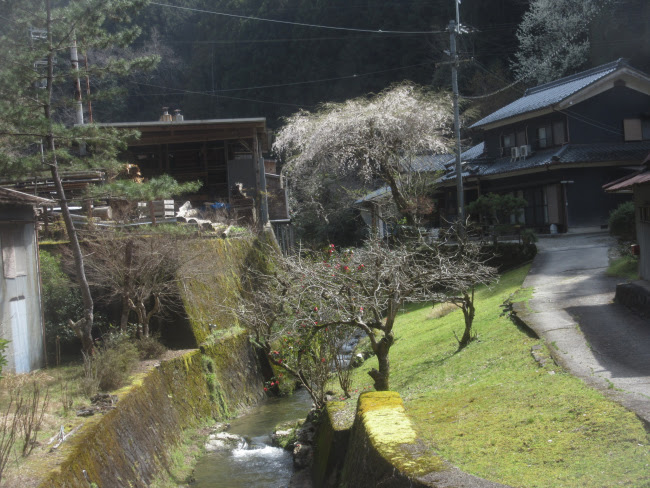 Especially when I saw this table: 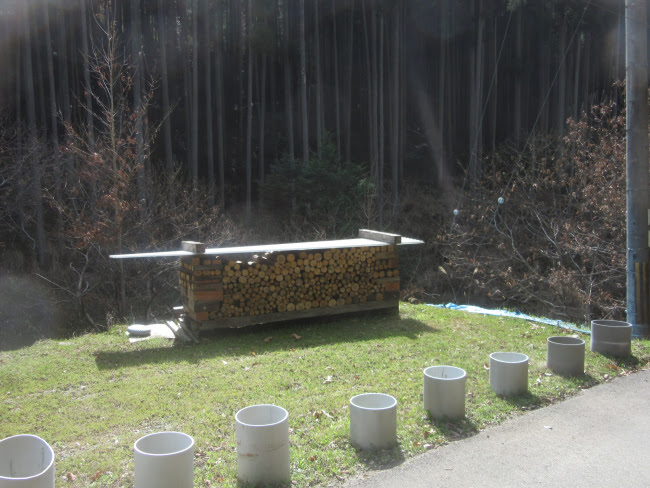 I finally ended up at Yoshino River. 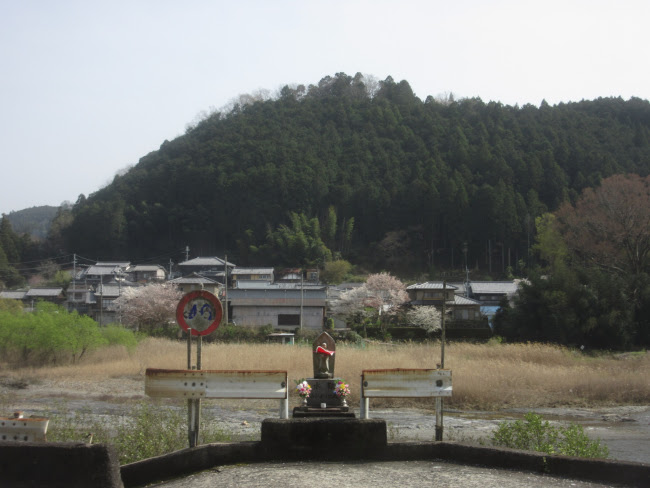 I walked from there to Muda Station, skipping three train stations for my route home. According to Google, I walked around 4.6 kilometres, or around 2.8 miles. That's not counting my walk around Mount Yoshino itself. So I guess that was enough exercise for one day.

Assorted snacks redeem the basket take.
We checked the box and cooked the curry right,
With flour, eggs, and salt, we often bake.
While sugar bides beyond the deadly night.
Computer shoes designed to run were slow.
The wire laces caught the edge of green.
Instruct the galley RAM to swiftly row.
There's something tiny stuck upon the screen.
A giant bed absorbed the extra room.
A growing face denied the novel prize.
Forgotten tabs would cause the cam to zoom.
The viewing distance changed instead of size.
The cherry mountains watched another fish.
The darker trees prepare a cooler dish.