It's a Harsh, Unforgiving Day in the Neighbourhood 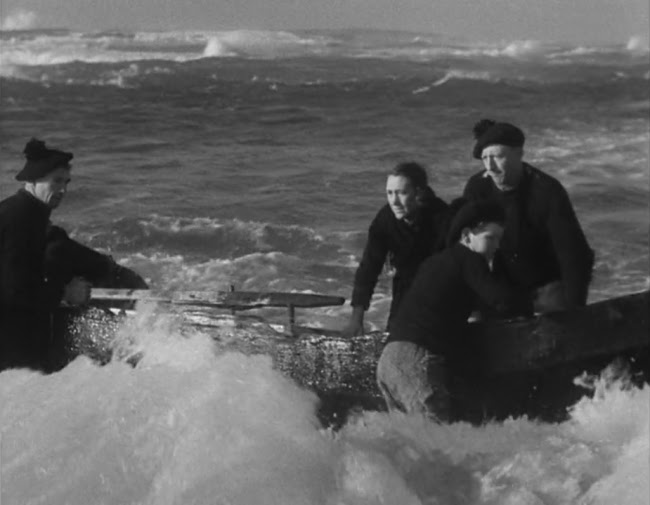 You think you've got it bad, try living on one of the Aran islands, like 1934's Man of Aran. Shot entirely on location on the Irish island of Inishmore, the footage remains incredible. The harsh living conditions are impressively enough conveyed--and then there's an amazing shark hunt. 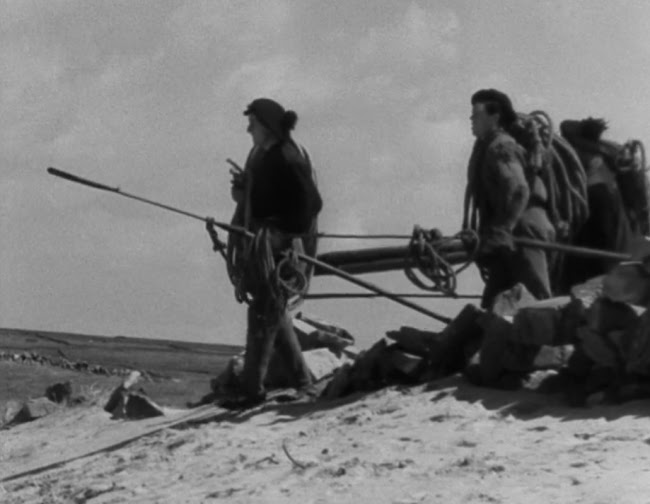 Shot very much like a silent film, all the sound is dubbed over. The dialogue isn't relevant to understanding the events unfolding--much of it is incomprehensible if you don't speak Irish, anyway. But it's easy enough to understand the woman trudging across a landscape of jagged stone, bowed under the weight of a massive bundle of kelp. 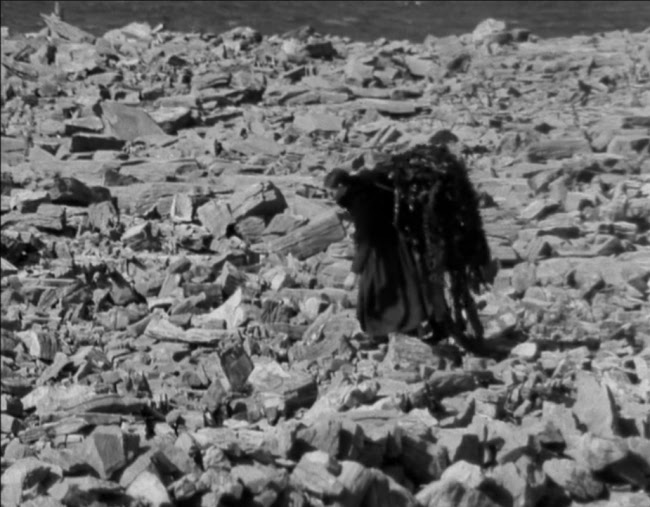 Meanwhile, her husband is busy with a sledge hammer, pounding away on the rocks. Title cards explain this is how they plant potato crops--they have to batter ditches out of the ground and put kelp and soil in them. A hard enough job becomes a feat of strength, endurance, and patience for them. 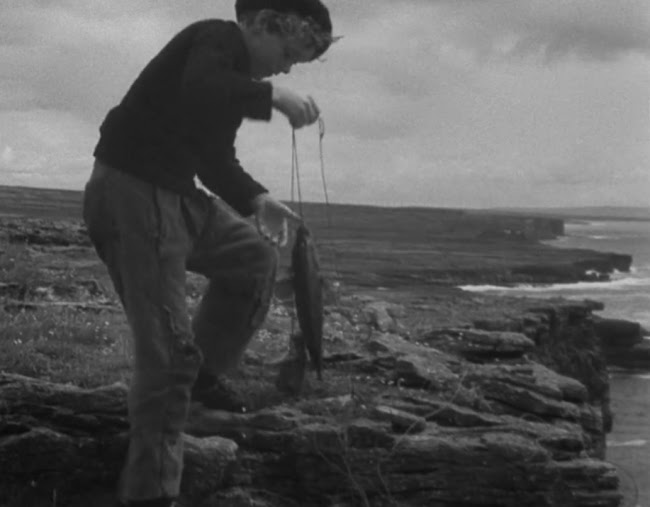 We also meet their kid who fishes with a crab for a lure. He's caught off guard, though, when a basking shark nabs his bait. 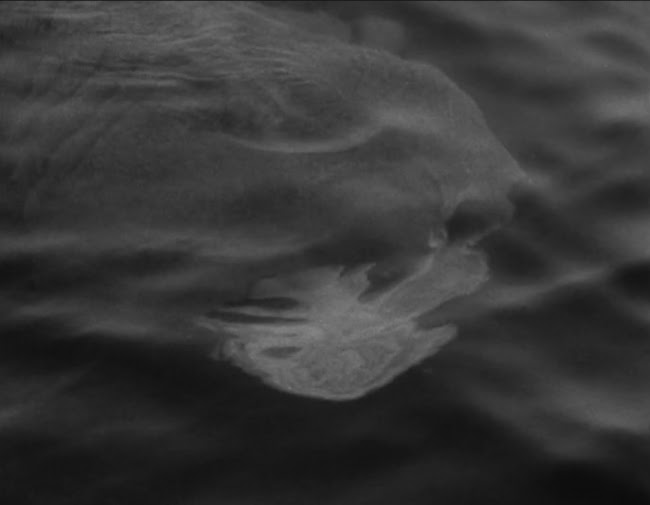 Yeah, basking sharks eat plankton, not crabs, but the film doesn't mention this--nor does it mention the creatures are of no threat to humans. But that's okay, it helps the drama a lot if you can put this out of your mind. I don't think I'd ever seen footage of a basking shark so the kid's first sight of one was a bit of a shock for me, too. 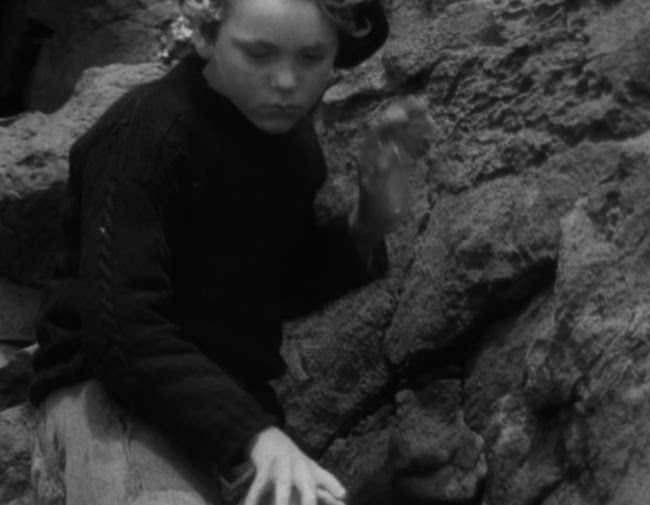 It looks really alien. Director Robert J. Flaherty (who also directed Nanook of the North) wisely cuts the musical score, leaving eerie silence as we watch the behemoth cruising under inches of water. We don't really get a sense of scale, though, until the film cuts to the men hunting it with harpoons. 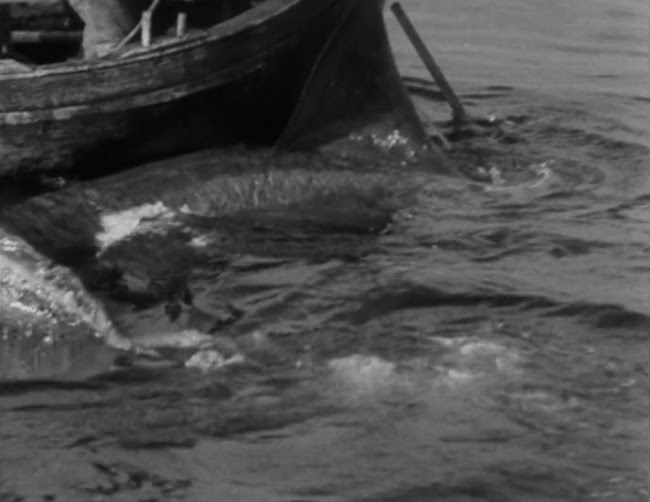 And then we realise this alien thing is bigger than their boat. When it gets away, the man retrieves a hook and incredulously holds the big thing up, showing it's been completely bent. 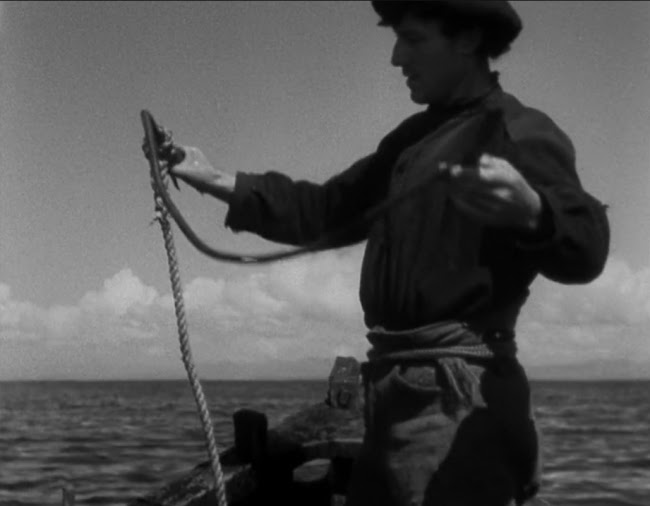 Flaherty apparently invented quite a lot for the film, actually, though, according to the Wikipedia entry, there's some debate over some items. Shark hunting for lamp oil was no longer practiced by the people and whether or not the people of Aran had ever hunted them is a point of contention. Of course, this is why fiction is usually so much better than fact.

Man of Aran is available on The Criterion Channel.

Posted by Setsuled at 6:43 PM
Email ThisBlogThis!Share to TwitterShare to FacebookShare to Pinterest
Labels: ireland, man of aran, movies