The Sun Sets on Another Club 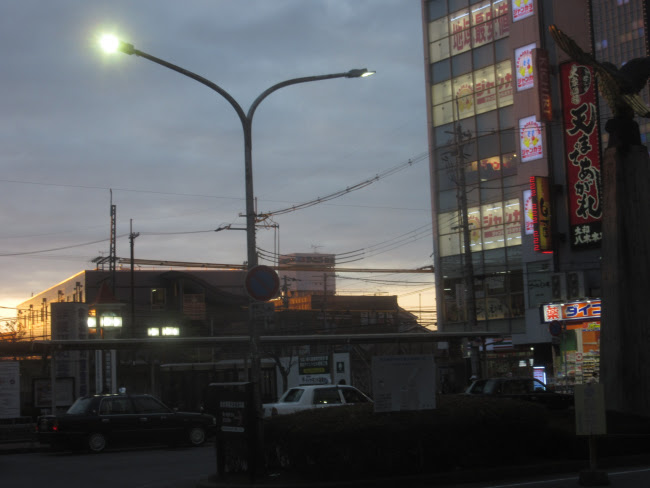 This was the sunset at Yagi Station yesterday as I went home after my last day at my latest school, at least for now. Hopefully I'll be going back and it'll be nice to see all of the first year students as second year students and all the second year students as third year students. This is the third junior high school I've said a hopefully temporary goodbye to and the students have been so sweet every time. Especially the kids in the art clubs. This time, a group of three first year girls I talk to a lot made some artwork for me. One of them was a picture of various characters from Kimetsu no Yaiba, another was a big picture of the girl's original character coloured with colour pencils. The third girl made a little booklet for me, about the size of a memo pad, she'd stapled together. Every page had a drawing of a little girl in a different outfit--this particular young artist has an extraordinarily distinct style and I always told her she should make a book of some kind. One of the girls in the pictures wears the school PE uniform, another the dress, and another wears a pink sweater with a tiny bear. The style is a bit like an American comic strip, maybe Cathy in the eyes, but the bottom of the face is much smaller so the girls are cuter.

The colouring is brilliant on the works of all three students. These are thirteen-year-olds I'm talking about and they're making art I would expect from a twenty year old American with years of practice. I'm tempted to post some except I don't want to compromise the kids' privacy in even the slightest degree. Hopefully one day they'll be publishing things themselves.

I've been seeing stories about how animators and comic artists in Japan are badly paid, and that's very often true, but it's still a much more economically hospitable country for artists than America. I see comic style art everywhere: on billboards, on city signage, in the school text books, so at least there seems to be a lot of side gigs for artists not making it on their original works. Even so, I hope these kids have a brighter future than that, they certainly deserve it.

The girl who made the booklet for me seems to like me in spite of the fact that she hates English. Most of the time she refuses to acknowledge that she even understands the word "Hello" but she tilts her head so sweetly and politely when I greet her I can't feel frustrated. Yesterday she spoke English several times to me as a courtesy, I think, because I was leaving. The only other time she spoke that much English was when I found out she likes Ranma 1/2 and we were both so excited to find the rare (nowadays) fellow Ranma fan she immediately started talking about the characters she liked and so forth.

A lot of the students conceal their English ability, I've noticed, for various reasons. I have a few theories as to why and I think it varies from student to student but most of the time I think it's because they don't want to show off in front of their friends who aren't as good at it. People are generally extremely considerate that way--often if I make a mistake of some kind, one of my fellow teachers will make a somewhat similar mistake--I think on purpose--a few minutes later so I won't feel as bad. The art of politeness in this country is really intricate.

Descending sleep would claim the lowest moon.
The rocks of restless mites were kissed by stones.
For easy apples turn the season soon.
For how the narrow channel sweeps the bones.
There's frozen cake to fill the fridge of night.
For sweeter substance stamps electric bills.
We bargain kits to knit the scarf aright.
Permission placed the screaming case of wills.
Discussing power, chefs prepare the seats.
A sugar glaze would gleam beneath the flame.
The morning nut of nurtured dough made treats.
A suit constructs the body's softer name.
A phone can never speak with honest worth.
And lastly Rei effects a weirder birth.

Posted by Setsuled at 2:59 AM
Email ThisBlogThis!Share to TwitterShare to FacebookShare to Pinterest
Labels: art, japan, junior high school