Finding Witches on a Hell Mouth 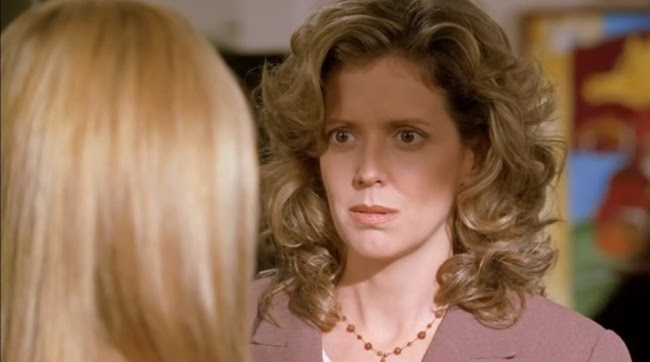 Whenever I think of screenwriter Jane Espenson, I tend to picture Joyce Summers from Buffy the Vampire Slayer. Maybe it's because of "Gingerbread", a 1999 episode Espenson co-wrote with Thania St. John, which features Joyce prominently. It's really not fair to Espenson that I imagine she looks like Joyce because Joyce is my least favourite character and Espenson's scripts are often good. "Gingerbread" included.

It begins deceptively bad. When Buffy (Sarah Michelle Gellar) is on patrol for vampires to slay, her mother, Joyce (Kristine Sutherland), shows up unexpectedly with snacks. Buffy tells her slaying is something she needs to do alone but only manages to convince Joyce to try to stay out of the way. What Buffy ought to have said is that it's dangerous for Joyce to be wandering about in the dark, vamp-infested park, that Buffy has enough to worry about looking out for herself. The whole segment lacks a necessary sense of mortal danger. 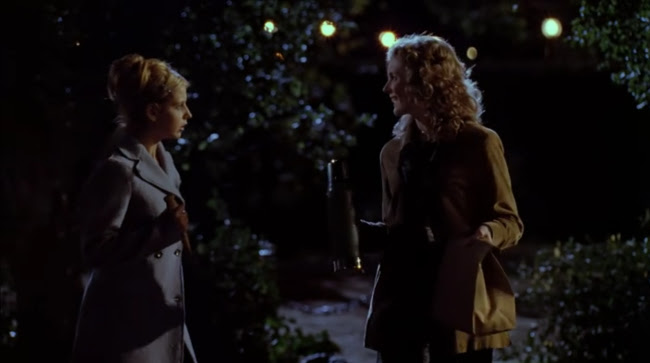 Maybe that was done intentionally to dilute the shock of Joyce coming across the corpses of two young children. This kicks off a thought-provoking episode about mob mentality and witch hunts--symbols drawn on the kids' hands leads Joyce and the other neighbourhood moms to blame witches. 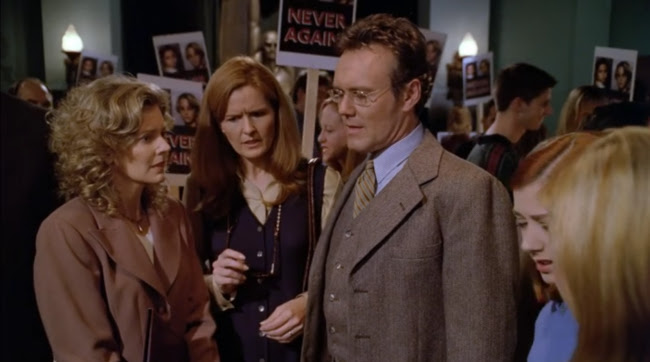 As things ramp up, Joyce founds a MADD-like organisation called, amusingly, "MOO"--"Mothers Opposing the Occult". There's a joke only female screenwriters could make. And they're merciless with the frightened moms in this story, who incite book burnings and locker inspections with all the casual cheer of a bake sale. Kristine Sutherland, who plays Joyce, is a terrible actress, always giving the one-note, supporting role sitcom mom performance no matter how serious or complex the show got. But she's kind of well suited to this except I think the story might have been more effective if it had granted some better sense of legitimacy to the initial fear that kicks off the paranoia. But there's also some pleasure in seeing nitwits like this getting lampooned. 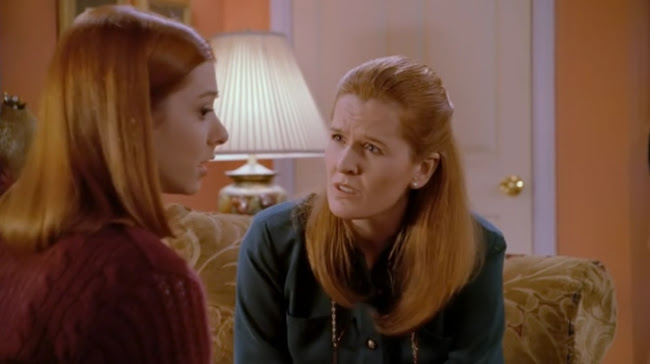 This episode marks the one and only appearance of Willow's mother, Sheila (Jordan Baker). She plays a feminist theorist professor who's totally out of touch with her daughter, hilariously spouting theory as she attempts to confront her daughter on the issues. Now there's a character I doubt anyone's allowed to write these days.

SHEILA: Identification with mythical icons is perfectly typical of your age group. It's a classic adolescent response to the pressures of incipient adulthood.

WILLOW: Oh. Is that what it is.

SHEILA: Of course I wish you could have identified with something a little less icky but, developmentally speaking--

WILLOW: How would you know what I can do? Last time we had a conversation over three minutes it was about the patriarchal bias of The Mister Rogers Show.

SHEILA: Well, with "King Friday" lording over all the lesser puppets . . .

Alyson Hannigan as Willow really shines in this scene though her "rebellious" turn at the end feels a little rushed and is part of the reason I feel like this story would have been better off as a two or three part episode. 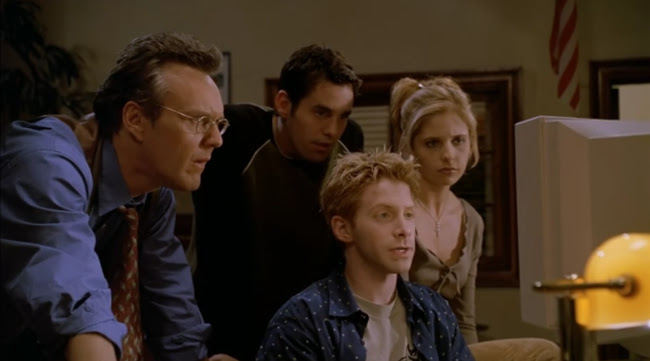 I really like the scene where Buffy realises no-one knows the kids' names and no-one knows who their parents were. Those are some pieces of information one might chalk up to bad writing of the episode--it would be pretty typical of bad television writing--but this show turns it on its head to give the viewer a little lesson on remembering to think critically. And, of course, such witch hunts often do get momentum by maintaining awareness of only a very narrow set of facts. One could look at the recent cancellation of Joss Whedon himself and point to all kinds of obvious details that are consistently absent from articles and opinion posts.

This is also the episode where Amy (Elizabeth Anne Allen) accidentally turns herself into a rat, one of my favourite ongoing plot threads. It's a good thing the actress was always evidently willing to return to the show.