Only the farmer you need is missing.
He always buys bait in the pier cafe.
Proper world wars often break for fishing.
Parrot networks are loud, lofty and fey.
Harpies never do anything alone.
They'll drink boxes of tea in one sitting.
The night is as boring as a bald bone.
While an idle, hungry fire's spitting.
A cow can keep a building very warm.
But it's much smarter to keep it frozen.
Some tasty fish swim in a handy swarm.
Stranger meat's delivered by the dozen.
The world is almost as flat as flat bread.
And wet as Weary Willy's nose was red.

I forgot to mention yesterday how happy I was that Al Franken finally got the Minnesota senate seat. But, jeez, you wouldn't know it from the news channels to-day--all I see when I switch between CNN and MSNBC is Michael Jackson coverage. Yeah, it's a sad story and everything, but enough already.

I'm starting to run out of steam, but I actually got quite a lot done to-day so far--I've already drawn and inked a page, gone to the bank, and unloaded the dishwasher. I have a bottle of sake I want to finish off, maybe I can to-night.

I've been watching Buffy the Vampire Slayer for a couple months now and last week I reached the end of the third season, so now I'm switching between Angel and Buffy. I'm kind of considering abandoning Buffy though--next to even just the first couple episodes, Buffy is clearly nowhere near as good as Angel. Though, to be fair, Buffy at college was a quickly abandoned storyline for a reason and the mayor turning into a lousy cgi monster had to be one of the worst payoffs in television history, so this isn't exactly Buffy at its best.

I am surprised to find third season Buffy in widescreen--I guess I really haven't watched it since it first aired, when the network probably cropped the image. The odd thing, though, is that it often doesn't seem to have been composed for wide screen. Whedon seems to forget what was actually in one shot when he switches to the next--like here-- 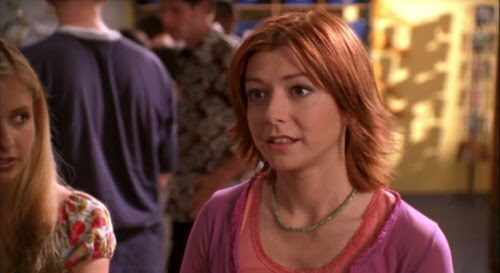 Oddly halved, nervous Buffy face doesn't quite match up when we cut to-- 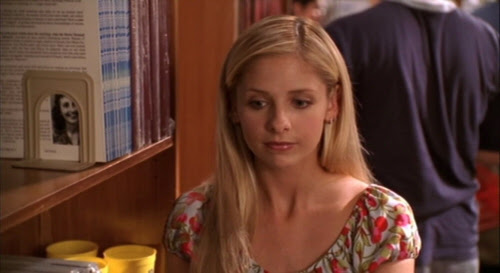 I guess it doesn't seem strange after all the cameos by the boom mic in the third season, but Whedon seems to mess up at least one shot in every premiere--a film crew member's sneakers accidentally make it into a shot on the series premiere of Angel, and who can forget this accidental showcase of Alan Tudyk's mime skills from the Firefly premiere; 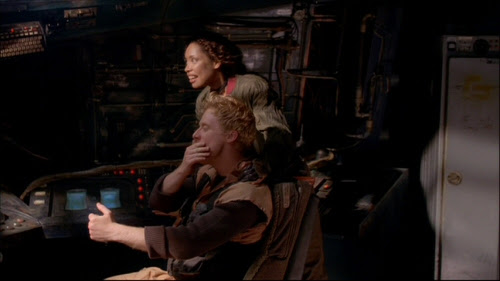 But I guess I can't imagine the stress of running three television series at once. None of these problems seem as bad as Willow's haircut, which I think actually mainly speaks well for the show. Gods, I miss second season Willow. She calls a guy a "cutie patootie" in a third season episode. Ugh. Willow brand cute must have been a difficult balancing act, but she tumbled right off the tightrope on that one.
Posted by Setsuled at 8:48 PM
Email ThisBlogThis!Share to TwitterShare to FacebookShare to Pinterest