Does a House Want to Talk to Me or Is It In My Head? 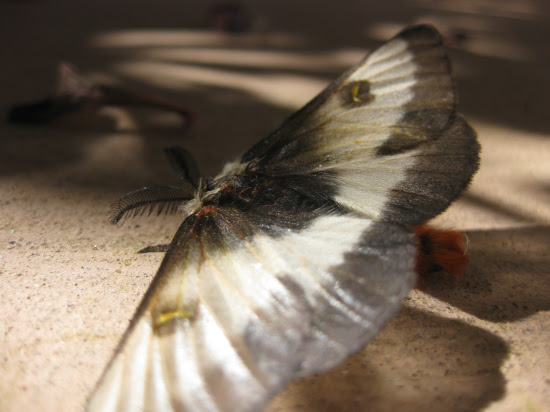 I saw another one of the moths go down, this one right outside the front door;

Music in the video is "Above Chiangmai" by Brian Eno and Harold Budd. I went to my parents' house for Halloween last night and my sister and I watched movies on TCM since the DVD player's broken. We watched the end of House on Haunted Hill and the whole of The Haunting (1963), which, while not a perfect film, isn't a bad one, and in the somewhat antiquated position of having little control over what appears on the television, kind of a very good movie. We Have Always Lived In the Castle remains the only Shirley Jackson book I've read, but It's easy to see how The Haunting of Hill House, the Shirley Jackson book upon which The Haunting is based, is probably much superior to the film. Jackson had an exceptional talent for transcribing a character's train of neurotic thoughts and using it to tell a story, not unlike Dostoevsky, in my opinion. While the voice over narration in the film transmits this to the audience, it's a bit cumbersome and sometimes redundant married with images and Julie Harris' often broad performance doesn't help. But I do love Claire Bloom as Theodora. I'd sort of love a whole movie about the movie Theo.

In any case, the idea of connecting the haunting of a house with the main character's internal psychological issues is great.

The nausea went away almost completely yesterday, but the chest pains came back, along with a soreness in my left arm. It was my arm more than my chest that kept me up a lot of the night and I was tempted a few times to go to the urgent care clinic the secretary at my normal clinic gave me the address for. But I knew that would entail extra expense, not to mention the fact that the urgent care clinic is around ten miles away, so I figured if I had anything serious enough to require an urgent care clinic, I likely wouldn't have been able to reach the clinic. So I took some alka-seltzer and deciding to ride it out. I do seem to feel better to-day, though my arm's still sore.

I felt a lot better while I was drawing, and, in fact, I realised it's while I'm drawing that I feel best, and I remember a big part of the reason I started Venia's Travels was to give me something to get my mind off of anxieties in my life. So whatever I end up doing after the comic, I think I'll need some kind of outlet for my creativity.