I figured I'd share some Venia's Travels "bonus features" to-day. Here's a chart I made for myself to keep track of the Niverikiin troops in chapters 54 through 58; 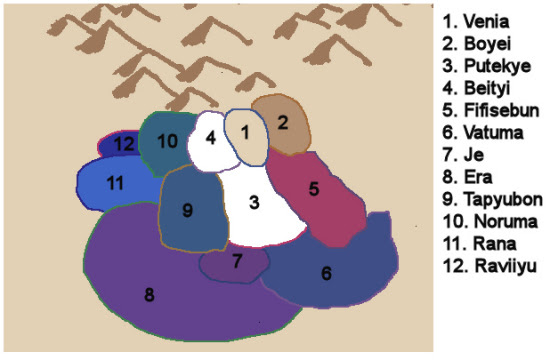 I needed to know how everyone was positioned so I could determine what kind of damage the Chimera and its humans slaves were going to cause, and where everyone would be at the time. The sizes of the blobs reflect the sizes of each Knight or Paladin's retinue--something I sort of drew inspiration from War and Peace to come up with was the differences is army organisation between Niveriku and Paelywa. Where in Paelywa, fighting forces were pretty medieval with groups of men at arms of varying sizes around individual Knights, Niveriku had something more like modern troop divisions. I basically just substituted the word "retinue" for "regiment", and the retinues were divided into battalions, companies, and platoons. I knew for a long time this was going to be one of the main selling points Venia would use to encourage the invasion of Paelywa, sort of like how Napoleon's more modern professional army compared to Russia's, still commanded by nobility and royalty, though actually Niveriku's army would be much closer to Russia's.

I'd determined in Chapter 43 how big everyone's retinue was, how many Lakguene slaves each noble had, and where everyone was from, which I considered very important in establishing character and the conflicts between the internal factions. This was also, of course, the main reason for the history I wrote for the comic. The Paladins from the northeast are generally more stubborn and unwilling to work with the men, but even they had the subgroup of women from the larger cities like Lady Era who are cagier and more tolerant of people with different world views. Meanwhile, Ladies Pepene and Waneha from the southeast coastal cities, are generally more easy going and have little interest in ancient conflicts. You might notice neither of those last two I mentioned are included in the chart, as they were two among several Paladins and Knights who split off from the main group to find territory elsewhere in Miig'Jaiach. I suppose one day I could conceivably write a sequel or spin-off about some of them and Sir Boyei.

Most of the Knights and Paladins are based on movie stars--Sir Boyei was modelled on Charles Boyer, for example. The naiads introduced in Chapter 30, though, Huelyn, Weyedne, and Eullina, were based on Huey, Dewey, and Louie. Weyedne didn't get much time for dialogue, but Huelyn and Eullina's personalities were modelled on how I've always perceived Huey's and Louie's personalities, with Louie being the ostensive leader and Huey being the wild one.

I played maybe a little too much chess yesterday. I probably ought to be looking for work. Incidentally, if anyone needs a writer, I'm totally available.
Posted by Setsuled at 5:26 PM
Email ThisBlogThis!Share to TwitterShare to FacebookShare to Pinterest