I'm so in love with Bill Maher to-day;

Yesterday I went downtown and played two games of chess at Horton Plaza. The first one was against a guy who looked to be around my age, wearing sunglasses, and I got off to a bad start when I lost my Queen to a rather obvious threat from his knight. But then I made up for it by taking his Queen and following it up by forking his King and rook. After this, the game became a route. The guy didn't lose gracefully, saying it was because he was "distracted."

Then I played against a guy I almost always see hanging around the chess boards but who I haven't seen actually play in a couple years--he's an old man, and he explained that moving the giant chess pieces hurts him, so another guy who'd been watching the previous game helped out by moving the old guy's pieces for him. The old man was wearing, as he has every time I've seen him, a blue sport coat and a beret--the beret was raspberry coloured, but I don't think he's what Prince had in mind when writing the song. We played a long, very close game which he ultimately won. It was an even game, as far as pieces went, most of the time but his pawns were better developed than mine, and before he made the decisive move, we both had one bishop and one rook, but he had two more pawns than me and two of my pawns were isolated. But it was a very satisfying game anyway. 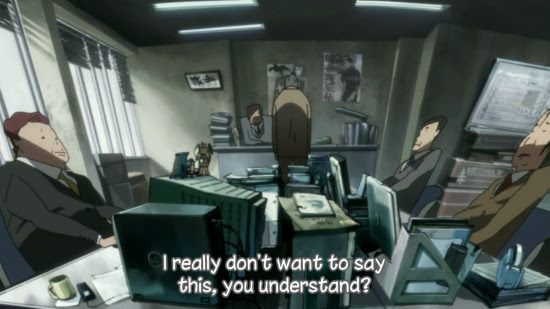 With breakfast to-day, I watched Panty and Stocking with Garterbelt, both the new episode and the last half of the previous week's episode, which I'd skipped when I saw it had to do with vomit (titled "Vomiting Point"). I'm glad I finally watched it, because it was a fascinatingly little vignette animated in a style reminiscent of Production I.G. (I don't know if they were actually involved) where people are given long torsos and kind of short, stubby legs. The faces were drawn with a fascinating, almost grotesque Expressionistic version of mundane reality interestingly contrasted by Panty and Stocking still drawn in their usual, plain, angular way.

Then, the new episode contained some of the show's best action scenes so far along with the introduction of Scanty and Kneesocks, demonic rivals of Panty and Stocking who look a bit like something by Coop