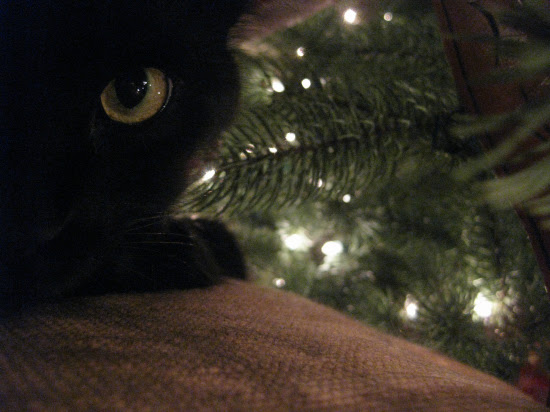 My sister's cat, Saffy, at my parents' house last night next to the Thanksgiving Tree, which was the Halloween Tree until recently. I really can't complain about my mother's tendency to put up Christmas decorations early as time really seems to have been picking up speed over the past couple years for me. A few weeks before Christmas Day feels like thirty minutes. 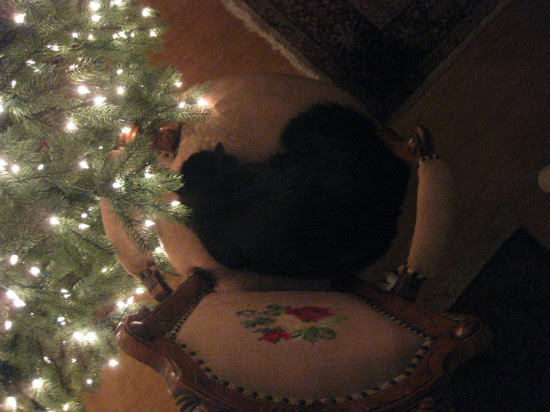 Saffy's in the chair, you might remember me mentioning several months ago, once owned by Errol Flynn. Robin Hood, Prince of Thieves was on the television when this picture was taken, and my mother was remarking on how cheap the movie looked. It is strikingly dated, filled with dumb anachronisms, and almost totally devoid of personality. It almost looks like a TV movie.

I watched the new Boardwalk Empire last night, which I liked well enough, except the very last scene, which didn't make any sense and kind of dissolved some of the cool subtext about what Margaret knew about Nucky's liquor business.

On Friday night, I watched Francois Truffaut's The 400 Blows. I was sort of reminded of the 1995 American film Kids, which also depicted delinquent city kids in a strikingly realistic manner. Kids was focused more on the sexuality of the children, as perhaps American 90s youth culture was more sexually active than 1950s French culture, though the protagonist of the Truffaut film, 15 year old Antoine, talks about his attempt to have sex with a prostitute.

What the two films do have in common is a portrayal of a world of teenagers fundamentally alien to a coexisting world of adults. Antoine's punished repeatedly for what are seen as wrong-doings on his part by adults, when almost none of his actions are done with any intention of harming the adults but are merely borne of a natural desire for exciting and happy experiences. As Antoine says to a counsellor at one point, he usually only lies to his parents because they don't believe him when he tells the truth.

When instructed to write an essay about a personal experience for class, Antoine unconsciously plagiarises Balzac--using words that seemed to perfectly describe the experience to him, he doesn't understand yet that he's required to find his own phrasing, the teacher doesn't understand his lack of understanding, and has no real desire to learn. Adults in the film constantly become angry when they find Antoine or one of the other kids isn't already on the same page as them, so it's little wonder Antoine feels any attempt to communicate with them is pointless.

Truffaut creates an isolated world of children onscreen with incredible power. One scene of a group of children watching a Punch and Judy show focuses on the faces of kids apparently actually enjoying such a show, not acting. In the context of Antoine's story, the faces convey the impression of a sort of underground world of the human animal.