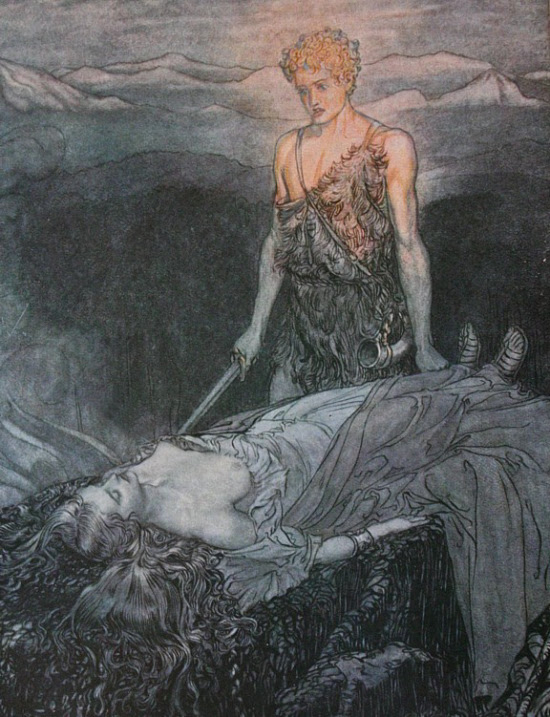 I've just spent some time looking at Arthur Rackham's illustrations for Wagner's Der Ring Des Nibelungen, wondering if he'd drawn Brunhilde bare breasted for the scene at the end of Siegfried. Of course he did.

I'd seen Rackham's illustrations of Wagner's operas before, I'd read the opera librettos translated into English, but somehow none of that comes close to the same impact as actually watching productions of the operas. But after watching them, Rackham's illustrations take on a new life. With breakfast to-day, I watched the third act of Siegfried--I've been watching one act at a time with breakfasts this week. The particular production I was watching of course didn't feature a bare breasted Brunhilde, but instead the sleeping Valkyrie is revealed to be wearing a chemise when Siegfried pulls off her breastplate. It works well enough to demonstrate that the sleeper is not a man as he first suspected though I, like Rackham, personally prefer art that errs on the side of nudity.

The scene of the conquering hero rescuing the maiden and expecting romantic or sexual rewards, either blatantly or subtextually, has been pretty thoroughly discussed.

But I found the scene in Siegfried incredibly fascinating, and it worked for me as symbolising a much longer relationship between two people, or as translated subtext of the psychological reactions of two people falling in love for the first time. Siegfried's never met a woman at this point, and he's established as a youth peculiarly unable to feel fear. Until he meets Brunhilde--and he's afraid of her before she even wakes up. He removed the breastplate and helmet expecting a man, something familiar to him, but when he finds something both strange yet attractive to him on a deep, instinctual level, he can only be afraid at the disorienting psychological experience. The dark woods hadn't frightened him, neither had the dragon Fafner, because these were all external things. But his desire to conquer fear doesn't provoke him to violence, but rather to kiss her.

When she wakes, one of the first things he does is to ask if she's his mother, and she replies, "I'm you." Some pieces of dialogue can only exist in opera, I think.

Siegfried's experience with women is limited totally to stories his adoptive father, the dwarf Mime, told him of his mother Sieglinde. In Die Walkure, the opera previous to Siegfried, Sieglinde and Sigmund's relationship was explicitly incestuous, and the two lovers madly indulged in a relationship of reflection, a relationship where each found his or herself manifested in the other.

So when Brunhilde, responding to Siegfried's frightening ardour, tells him to love himself and, "Let me be," we're not only reminded of Siegfried's parents, but also, as Brunhilde describes previously being worshipped in her virginity, of chaste, chivalric romance. This isn't enough for Siegfried--instead of contenting himself with the beauty of his reflection in a pool without marring it by touching the water, he wishes to "dive into a flood."

I love that Brunhilde got a whole opera defining her character, so it means something when she sings about fearing the loss of her identity with her armour. The fear and delight both she and Siegfried feel at pursuing a strange and new experience is wonderfully conveyed by their song.