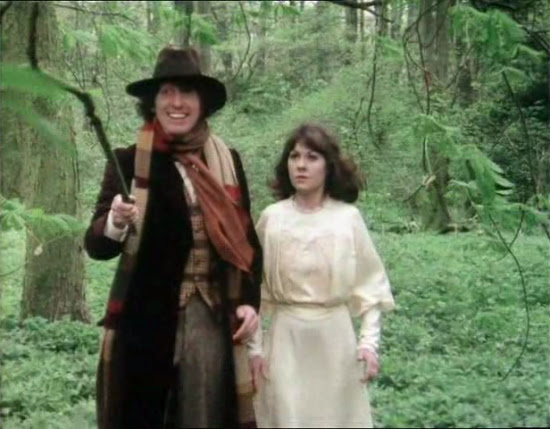 Sometimes I wish there were a reliable, easy standard of sanity at one's fingertips at all times. Where any two people, in the heat of an intractable argument, could finally give up and say, "Okay, let's check the sanity index," flip to the back of the book and solve the problem to the satisfaction of both parties. I suppose a big part of the reason for religion is to have a final word on things.

You get scientific evidence, of course--as Bill Maher indicated in his editorial on the Stewart/Colbert Rally for Sanity, what Right or Left commentators say about climate change shouldn't qualify or disqualify what climate scientists say about climate change. But I think it's becoming increasingly clear nowadays that one can never have indisputable facts when everyone can go back to their corners of crazy at the end of the day.

And when you can't get consensus on big, important issues like climate change, what chance have more localised issues, particularly issues as local as relationships between a few people? How common is it to see one person interpreting the words or actions of another as either threatening because of their own recurrent fear, or positive because the other person is attractive in some way? And then these impressions are given heavier foundations by groups of friends who support dreams with their own preferences and fears.

I've been weirdly worked up about the split between David Arquette and Courtney Cox. I'm not normally very interested in celebrity gossip, but I found the way various news magazines twisted and changed the interview David Arquette gave on The Howard Stern Show as kind of an irritating and frightening indicator of how easily narratives are crafted in society and how the human mind works.

Stern was talking about a tabloid story that had intimate pictures of David Arquette with a woman who was not his wife. This bothered Stern because he's friendly with both Cox and Arquette, and Arquette has sat in for entire five hour Stern Shows in the past couple years. So Arquette called in to explain that he was not cheating on his wife because he and Cox had been separated for some time and that the freedom to see other people was one of the conditions of their separation. He also vented a bit about his unsatisfying sex life, that he and his wife hadn't had sex in some time, which might have been inferred anyway, and that it had become somewhat sadly mundane when they did have sex.

The next day, entertainment shows were running with a narrative about how Arquette was a scumbag putting salacious details out there while Cox suffered at his general douchebaggery. The hypocrisy inherent in a media that thrives on exposing personal details of celebrities condemning one for being open seems obvious, at least to me, but there's a hypocrisy that Stern alluded to when ranting about the narrative later that seems more important to me--that it's okay to discuss personal details in a tell-all book or on Oprah, but not on The Howard Stern Show. It's not so much the nature of the Stern Show, I think, as that this provides the tabloid media with an opportunity to define themselves as morally superior without curbing reporting contrary to their own professed morals.

The influence Lenny Bruce had on Stern is obvious to me, and Bruce in turn was influenced by Jack Kerouac, and the main thread of the beat artistic legacy is that of an unvarnished exposure of human nature in all its beauty, ridiculousness, and hideousness, a reaction to the stiff, falsely happy social conventions imposed after World War II. It's hard to get to that centre of sanity and reality, and it may be a never ending job, but such openness in public discourse is vital if we're to get anywhere. 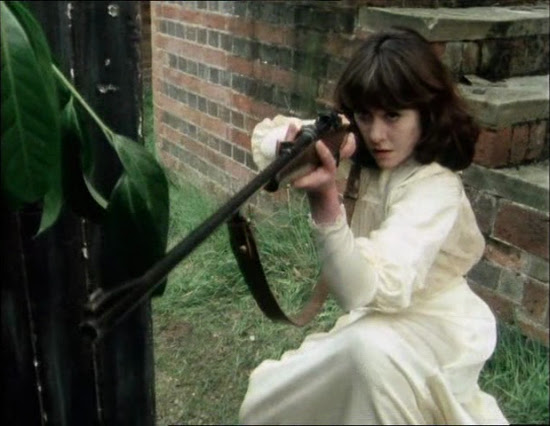 It sure is nice to see a useful Sarah Jane Smith. I'd read that Elisabeth Sladen had threatened to leave the show after she'd fought a lousy looking prop in the "Revenge of the Cybermen" serial, but I suspect her actual reasons for wanting to leave was how badly her character was being written on the show at that point. She'd been reduced to a whiny fifth wheel, who had a knack for making consistently wrong decisions that necessitated her rescue. Doctor Who has rarely exhibited strong female characters so far, but the treatment of Sarah Jane Smith took it to another level. It felt like the writers outright hated her. Which was why I was pleased when "Terror of the Zygons", the serial following Sladen's threat to leave the show, actually featured the character usefully contributing, though it earned her a couple grating "Good girl"s from the Doctor.

In "The Pyramids of Mars," I'm pleased to find her more of an equal in dialogue with the Doctor, possibly owing to more improvised dialogue between her and Tom Baker. I particularly liked a bit where Sarah noted a door had vanished, the Doctor replied that it'd not vanished, "It's just not visible," and Sarah said, "Same difference." 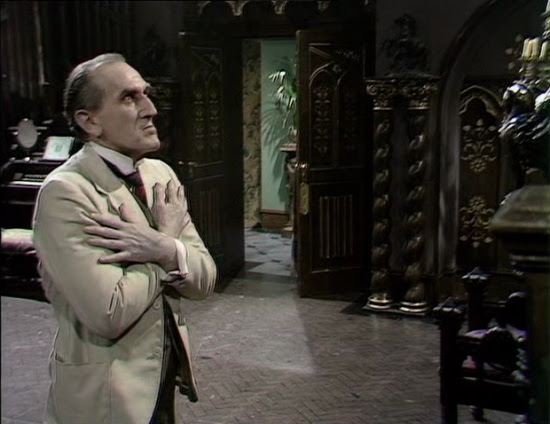 "The Pyramids of Mars" was also one of the aesthetically nicer episodes--I loved the villain with the white jacket, and pale makeup with red eye shadow. And I loved seeing the Doctor and Sarah wandering through pretty woods. 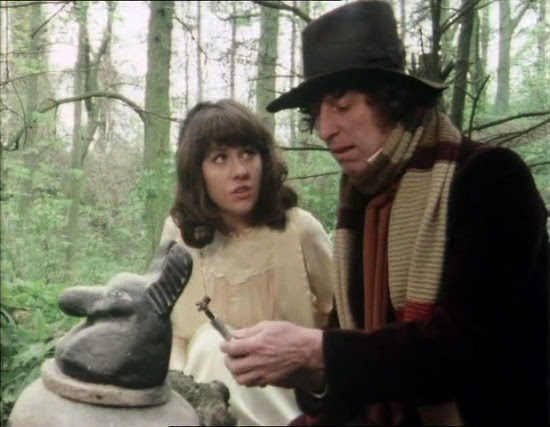 Posted by Setsuled at 1:35 PM
Email ThisBlogThis!Share to TwitterShare to FacebookShare to Pinterest