Last night I dreamt I was playing the newest Super Mario Brothers game, which involved being kidnapped in real life and being placed in a large, white, brightly lit windowless skyscraper filled with a labyrinth of ramps, corridors, and hospital waiting rooms. I wandered for a long time, at one point coming across a six inch or so high diorama of a room with a cupboard and a dressing screen, both made of paper. Some of the waiting rooms I came across were almost empty, one having only a single elderly couple. Other times, the waiting rooms were enormously crowded and had merchants with booths set up to take advantage of the crowd. I tried sliding down a banister and found it to be covered with a woman's thin gold and silver chain necklaces she was selling. 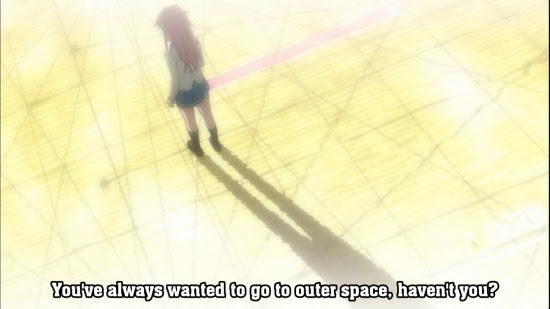 Maybe it's inevitable that an industry characterised by conformity in a country traditionally known for conformity would produce a series with supposed pirates as protagonists that's more than a little confused about itself. Two episodes in, I'd say at the very least Violent Space Pirates (モーレツ宇宙海賊) would be more accurately titled Violent Space Privateers. Maybe there isn't a word for privateers in Japanese, though, I certainly can't find it in my dictionary. In any case, a speech one character gives about how soldiers employed by a government have the luxury of not having to kill on their own authority while pirates always have to face the responsibility of their actions loses some of its punch when the "pirates" are established as an academy of mild mannered school girls funded by a government agency. 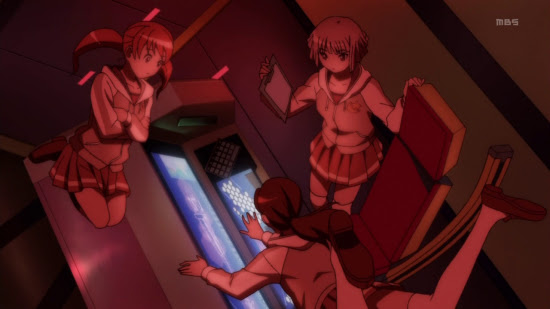 One of the ways you can tell this isn't a GAINAX series is that the miniskirts worn by the girls tumbling about in zero gravity magically cover their panties from every angle. But this series does seem to be taking a few of the cues from GAINAX a lot of the other GAINAX imitators don't, most appreciably an attempt at creating scale and a sense of wonder for space travel--starting with the main character on a planet, working as a waitress and being awed by gradual introductions to the world of the pirates. Though she is established at the beginning as being a crack pilot. 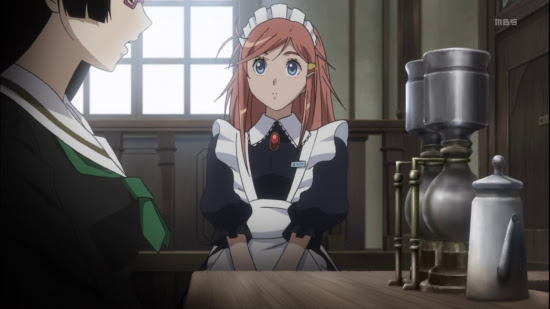 With its undistinguished, sort of bland visual style, the show seems like a corporate attempt to capture some of the fire of creation. It is sort of cute, though, maybe I'll watch a couple more episodes, if only to help sharpen my Japanese until the next good anime series comes along.

Posted by Setsuled at 3:35 PM
Email ThisBlogThis!Share to TwitterShare to FacebookShare to Pinterest