Last night I dreamt I was in a large, crowded super market where everyone was behaving like it was an MMORPG. Most of the time I couldn't say exactly what it was about their behaviour that made them seem like MMORPG avatars, aside from the fact that everyone moved at a trot and mindlessly grabbed items from shelves. It was more something about the cold hunger of everyone's actions that conveyed the impression to me. I also had a dream about Kirk, Spock, and McCoy trying to leave a desert city during a sandstorm but since only Kirk had a mount, it was decided he would leave alone and come back with help. 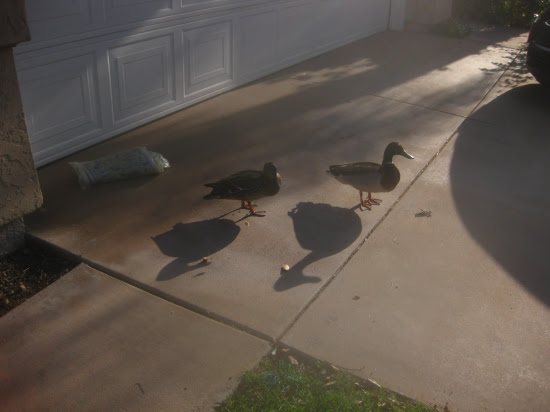 I took this picture while my sister was feeding these two ducks in my parents' driveway. I watched Drive again with her last night, and I remain impressed by the film. I understand a woman tried to sue the producers of the film for false advertising because it wasn't a cacophonous video game like The Fast and the Furious. I guess that's why Wikipedia says moviegoers at CinemaScore give it an average rating of C- while it's on virtually every critic's top ten list for 2011. It's such a brilliant exercise in mood and also a great action noir. Though, thinking last night how Taxi Driver was an influence on the film, I couldn't help thinking about what makes Taxi Driver a superior film, which is that Travis Bickle is a much more flawed person than the Driver. Although the action is shot with a satisfying kinetic reality, the isolation of the Driver from people for his violent urges feels more like a superhero story because the Driver's violence always works out for good while Bickle's actions are always more ambiguous and worrisome.

However, Ryan Gosling creates a great sense of vulnerability in the role. He's larger than life, but resonates on a very human level. He's kind of a dark Indiana Jones, maybe.

To-night I need to write an essay in class completely in Japanese. I think I'll do okay, but I feel like I need to prepare a bit. I wonder if it's going to need to be in MLA format.

One of the new words I've learned with the new lesson is the word for "writer", 作家 (pronounced sakka). It uses the kanji for "to make" and the kanji for "house". Not so much to say making a house as to say, I think, someone who makes things inside a house. Someone who doesn't get out much, I guess, which certainly seems appropriate.