That Dame's Got Spock's Brain! 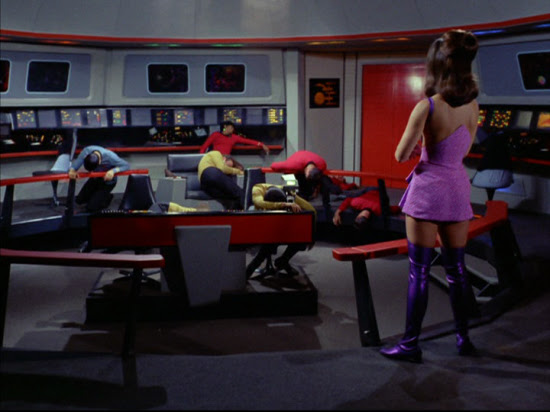 I'd like to take a moment to say a word in defence of "Spock's Brain". The episode, the season premiere of season three, is infamous, many people consider it the worst episode of the series. It is silly, to be sure. But it makes me smile. How could I not smile at all the lines where McCoy desperately rasps at Kirk about "Spock's . . . brain! His brain, Jim . . . it's gone! His brain!" Also, you get to see a full shot of Nurse Chapel's panties; 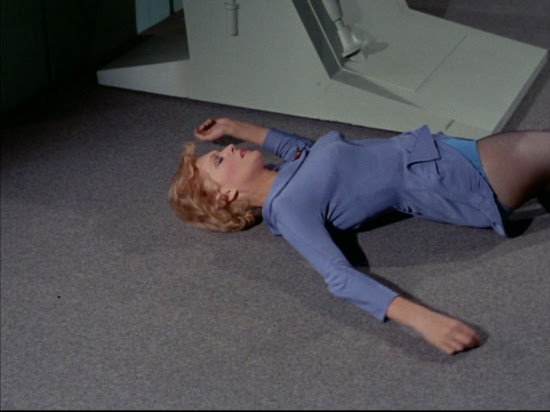 Every once in a while, I guess Roddenberry used his own wife for fanservice. I do appreciate the fact that no attractive woman on Star Trek ever wears more than a tiny skirt and the tops are often the sort where modesty wouldn't be accommodated by bad posture. But as a fellow pervert, I probably would've sat Gene down and put it to him, "What's the point exactly of a short skirt when what's underneath looks like the trunks of a 1911 strong man?" 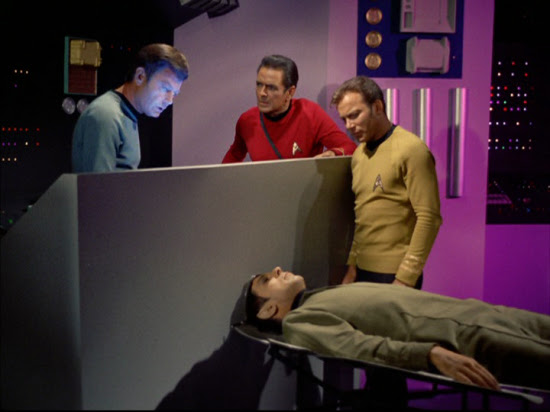 How can one not smile when Spock assists McCoy in the surgery to put back his own brain? It's all very silly, but it's not obnoxious bad like "The Omega Glory". At least there's not a really broad statement about the superiority of American white men.

"Spock's Brain" isn't even the worst episode of the third season I've watched so far. That honour belongs to "The Paradise Syndrome". It's been pointed out that "The Paradise Syndrome" relies on stereotypes of stupid Native Americans, but I ask how can you tell the Native Americans in the episode are especially stupid when we see Kirk, Spock and McCoy casually strolling about a planet when they've just remarked they have only thirty minutes to get back to the Enterprise in order to stop an asteroid from destroying the planet? Or when Kirk goes missing, we see Spock telling McCoy they need to get back to the ship in order to stop the asteroid and have to give up on searching for Kirk, it apparently never occurring to him that even one of the over four hundred members of the Enterprise crew could be left behind to search, maybe with a shuttle craft?

Meanwhile, the alien Native Americans (there's a term to wrap your mind around) are stupid because one of them can't figure out how Kirk's shirt is laced on, and they take him for a god for saving a child's life. Some characters are born for stupidity, others have stupidity thrust upon them. How much difference does it make in the end?

Hi; I love the short skirts of the original ST women. And I think Majel had some of the most beautiful legs ever. Please tell me what you think. Best Wishes. Sincerely, Tom