Paris When It's Parallax I was reminded of 1965's Pierrot le Fou, which came out a year after Paris When It Sizzles, and also discusses the ways in which cinematic language manipulates the audience, how we've been trained to respond to certain plot patterns and musical cues. Pierrot le Fou does this with more solemnity, while Paris When It Sizzles cynically tosses out its observations in the process of serving us with what seems to be exactly the sort of shallow, hackneyed plot it's criticising. 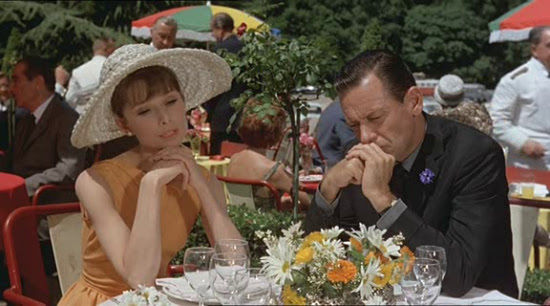 Many of the cliches and concepts of fiction criticism Holden's character, a screenwriter, discusses with the typist to whom he dictates his newest screenplay (Hepburn), are things I'm very familiar with from reading actual film and literature criticism--the necessity of switches, the reliability of the "prostitute with a heart of gold" character, how My Fair Lady is essentially Frankenstein. But while Holden speaks of these things with bitter fatigue, he condemns New Wave film and method acting, two things the movie presents in satirical form--Hepburn's character talks of meeting the director of a New Wave film about people who get together to play Scrabble and never play Scrabble because, the director says, film should be about what doesn't happen, while Tony Curtis has a small role in the movie as a method actor, displaying all the "ums" and scratches that Holden accuses such actors as using to destroy the rhythm of a screenplay.

By attaching these experimental forms of cinema to Hepburn's character, they become the objects of Holden's character's jealousy and one starts to see Paris When It Sizzles as a soapbox for George Axelrod, the real life screenwriter of Paris When It Sizzles, and his bitterness towards modern ways of filmmaking. He presents the old fashioned screenwriter as a drunk, completely disreputable, so he can dig his way to redemption, along with traditional studio filmmaking, by the end of the film, winning Hepburn's heart, a barometer for the audience's, in the process. Except, of course, Holden didn't capture Hepburn's heart in real life and in less than decade after Paris When It Sizzles the traditional studio film would be a thing of the past.

The movie does have its good points, like I said. Holden's performance is sort of monotonous, but I could happily listen to Audrey Hepburn read the phone book putting random emphasis on words in her peculiar way. The movie's funny, too, in pointing out the cliches of traditional film. A cutaway seems to Hepburn too obviously implicit of coitus, but Holden points out we don't actually know what happens after the dissolve, saying he chooses to believe the characters are playing Parcheesi. Which leads to the classic line from Hepburn later; "After last night's Parcheesi game, I'm yours forever." There are funny cameos by Marlene Dietrich and Frank Sinatra. But mostly the movie reminded me of a hipster who can be very funny criticising media but, when it comes to it, is creatively impotent himself.

Posted by Setsuled at 7:55 PM
Email ThisBlogThis!Share to TwitterShare to FacebookShare to Pinterest