When I was a kid, I had some tiny novelty six sided dice. They were almost like grains of sand, they were so small. I dreamt last night I was marching with an army across a cold, northern country. There was little flora, just mud for miles and as we passed a lake, I spotted some of the tiny dice in the mud and immediately had to dig for more. In the middle of the lake, on the bottom, was a glass walled pod wherein lived a small group of aristocrats and Audrey Hepburn, who was wearing a bright green wool dress. They couldn't leave the lake.

I found a handful of the dice and I gave them to a tall, important man in our army who was wearing a purple robe and the demon mask from the movie Onibaba. He used the dice to make himself invulnerable when he fought an enemy who remained invisible to me for the duration of the dream--not quite invisible, actually, but like he cast some kind of spell that prevented me from looking at him, like The Shadow.

I think the dream was influenced by my viewing of Revenge of the Sith last night. The past few days, I've been watching the prequel trilogy on Blu-Ray. In spite of their flaws, I think I've come to the point where I have to say I like the prequels. I suspect more people like them than are willing to admit it.

I won't say they don't have some serious problems. Attack of the Clones is really just a bad movie, but even that one has elements I respond to. The Phantom Menace, I think, is the most underrated, the one that gets the most undeserved hatred. The only genuine problem I have with it is Jar Jar. Yes, kid Anakin's story isn't as interesting as the protagonist stories of the other movies, but I don't necessarily think it's bad, especially not if you're watching the movie as a little kid. I sympathise with criticism that the kid stuff doesn't sit well with the complex political story, but I can kind of forgive Lucas for making this mistake. After all, the original trilogy films were considered simultaneously kid films and films for grown ups. Maybe it was in deliberately trying to play to both audiences that caused Lucas to stumble with Phantom Menace.

But there are at least four elements that make Phantom Menace good enough for me; Darth Maul, the visual design of Naboo and Coruscant, the pod race, Qui-Gon, Obi-wan, and, especially in Blu-Ray, Queen Amidala's wardrobe. 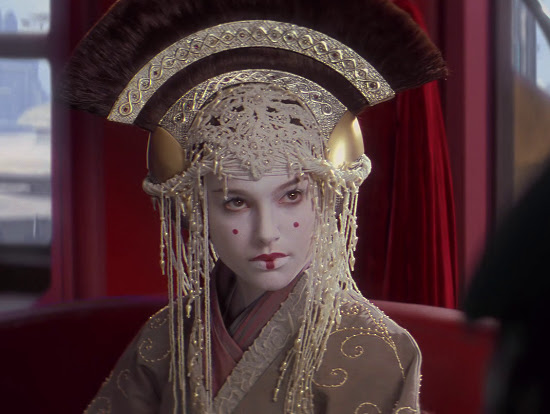 Gods, I love all her outfits.

In comparison, Attack of the Clones is a complete mess. Visually, it's mostly the noise of too many digitally created environments with no particular coordination, almost rivalling the BioWare games ugliness. Except Kamino--I like the eerie sterility contrasted with the constant rainstorm outside.

But the screenplay, co-written by Jonathan Hales, a television writer, has the superficiality of a television script. Most of the dialogue doesn't resonate with characterisations. I actually don't mind the infamously bad line Anakin has about how coarse sand is--it is bad, but it's bad in a way a teenage boy talking to a girl he was a hard-on for would be. Is it really worse than "scruffy looking nerf herder?" Too many people seem to want these kids to be more badass and adult, and they seem to forget what makes Empire Strikes Back work so well is the youthful vulnerability of Han, Luke, and Leia. The problem with Attack of the Clones is its lack of consistency in the characterisations, particularly in terms of Padme, who the movies seem reluctant to give any character flaws, even in the otherwise very good Revenge of the Sith. But in sort of wanting to like the movies, I started reading more into her character last night than maybe is actually there.

One of the laughable moments in Attack of the Clones is when Anakin tells her he slaughtered sand people children (sand children?) and her response is to kneel beside him and say, "To be angry is to be human," and basically seem to forget about it afterwards. Yet the big deal breaker for her in Revenge of the Sith is when she finds out he murdered younglings (if the word "younglings" had been replaced with "children" throughout the film it would've worked eight times better). I laughed to myself and thought, "It's like she's racist."

And then . . . I thought . . . what if she is racist? It makes sense, after all--although by the end of Phantom Menace, the humans of Naboo were working with the Gungans, but the two peoples had obviously been segregated a long time. I'm not saying Padme was slobbery Tea Party racist, but instinctively. Think about that line again, "To be angry is to be human." It's not so bad, because it's human, unlike the sand people.

I thought more on this and this points to an explanation for another problem--why she falls for Anakin at all. It's clear why Anakin does--he imprints on her after he loses his mother, she's a child in an adult occupation, and he needs to catch up and posses her. It's mixed in with his ambition.

For her--she didn't have a childhood, she's all ideals, but no grasp of things on a ground level. For this reason, Natalie Portman is right for the role--I've come to the conclusion she's not a bad actress but a boring person, someone whose imagination can only create emotions and reactions for boring characters. That's also why she worked so well in Black Swan.

Padme's probably aware on some level that she's led an isolated, stilted life, and her brain computes giving into passion with Anakin as the way of touching the other side of life. Now I start to see how they both have these tragically flawed motives, it actually heightens the effect of the whole trilogy for me.