On the Edge of Sex 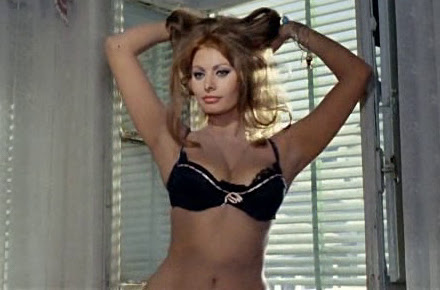 After watching so many Italian films from the 50s and 60s about the harsh lives of prostitutes and hustlers, it was kind of fun to watch the silly, lightweight 1963 comedy Yesterday, To-day, and To-morrow (Ieri, Oggi, Domani). The film's comprised of three short films, each starring Sophia Loren and Marcello Mastroianni, and each having to do with a romantic relationship between the two being complicated by trivial or absurd developments. I would've liked the film's characters to have had a little more to them, but a lot of mileage is gotten just from having these two attractive movie stars being so diverted from their goals.

In the first story, Loren and Mastroianni are a married couple whose only income is that which Loren makes illegally selling cigarettes. When authorities come to repossess their furniture for Loren's failure to pay up on debts, the couple hides their furniture in other homes. When it seems Loren might be arrested instead, they discover that Loren can avoid prison time so long as she's pregnant or nursing a child, which leads to Mastoianni's stamina being tested as he's required to impregnate Loren constantly. Somehow Loren manages never to look dirt poor or like someone who's given birth to seven kids in rapid succession.

It's the longest and weakest of the three stories--it's no fun seeing Loren pregnant, however unconvincingly, and there's a lot of business about everyone in town helping the couple for no apparent reason.

The second story, the shortest, involves Loren driving Mastroianni around in a Rolls-Royce. She's the wife of a wealthy politician and spends the vignette trying to seduce Mastroianni, while meanwhile she's amusingly unaware of what a bad driver she is, hitting the rear of every car she stops behind much to Mastroianni's consternation. They both look great in this segment and the comedy's mild enough you can just enjoy the coolness.

In the third story, Loren's a call girl and Mastroianni's one of her clients. The story opens with the best bit in the movie; a young man training to be a priest accidentally spies on Loren arranging plants on her balcony while only wearing a towel.

I suspect Loren must have very small nipples.

But I don't know--the movie ends with one of the most frustrating strip teases in history. Though I imagine it would've been ten times as aggravating if I thought there was any chance of Loren getting naked. But not only do I know Loren's always been morally opposed to this, there's a punchline I saw coming a mile away that I knew would make her stop just before removing her bra.

Great, thanks. It's hard to laugh at Mastorianni's frustration when you so sympathise with it.

The movie was released in 1963 but for some reason it won the Academy Award for best foreign language film for 1964. Which is well for it, as in 1963 it would've been up against Fellini's 8 1/2 and Kurosawa's High and Low. Though I would say 1964's Onibaba was a superior film.