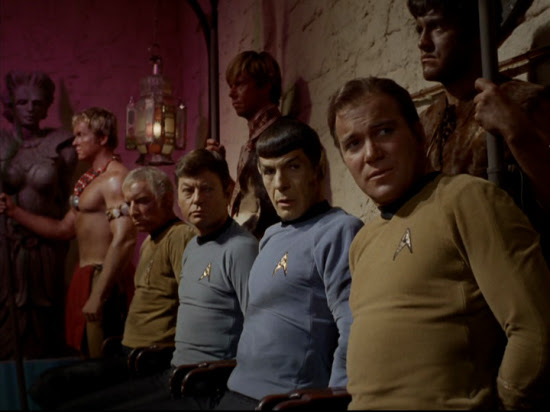 For a show about a mission to "seek out new life and new civilisations," a persistent problem with Star Trek is its repeated use of alien peoples that, for convoluted reasons, just so happen to not only look human but exactly mirror human cultures. In the second season alone, I've seen a Roman world, a 1920s gangster world, and a Nazi world. These aren't necessarily bad episodes, and I can sort of play along, though it's basically depressing. The episode I watched last night, "The Omega Glory", finally just annoyed the shit out of me.

It starts off well enough--The Enterprise encounters a Federation ship devoid of its crew, though the crew uniforms appear to have been left behind. Eventually they discover that the crew contracted a disease that obliterated all water in the human body, turning the people into just, as McCoy says, "a pile of chemicals."

The only survivor is Captain Ron Tracey, whom Kirk, Spock, McCoy, and a Red Shirt discover living among the natives on the planet in violation of the Prime Directive. The basically medieval culture is comprised of people Asian in appearance, and they're locked in an ongoing struggle with white barbarians. Mainly the story seems to be about how the people were descendents of countries that had engaged in devastating biological warfare centuries before, and the disease is a remnant which the contemporary inhabitants had inherited immunity for, as had the natural food supply, which provides the Enterprise crew with the cure they need (except the Red Shirt, who gets shot).

So far, not so bad. Kind of interesting. Then, in the last act, there's this; 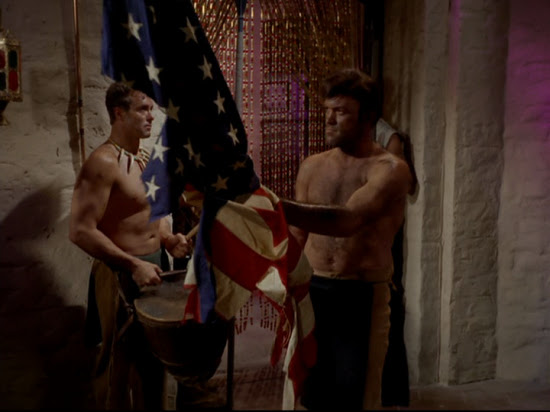 Yeah. Turns out the "Yangs", the barbarians, are descendents of "yankees", Americans, and the Asian culture, the "Kohms", are descended from communists.

There's nothing about how these are descendents of Earth settlers, or how an interfering historian or godlike alien implanted Earth cultural information. It's just the champions of liberty apparently are inevitably white and their flag was inevitably red, white, and blue, stars and stripes.

Kirk has this big, grandstanding, growling, Oscar clip speech when the barbarians take over about how liberty isn't just for the Yangs but ought to be for the Kohms as well. But the damage is done. Yech. This is not Star Trek at its best. 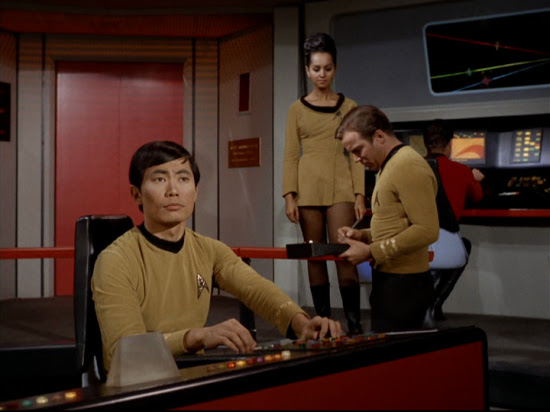 The only good thing about the episode is that Sulu is left temporarily in charge of the Enterprise instead of Mr. Scott for some reason. Maybe in an effort head off accusations the episode is racially and politically motivated as it in fact is. But it's nice to see Sulu again--watching the show in production order, I went through ten episodes where George Takei was away shooting The Green Berets. A film which is also not a sterling example of anthropological wisdom.