Disguises Becoming the Form of Intent

I ate lunch at Denny's to-day, which is next to the Wal-Mart, which I walk past almost daily and where I think I'm seeing some of the negative reaction to Obama's support of gay marriage in the increase of guys calling me a "fucking faggot" when I walk past (I think because I wear a hat). While eating lunch at the Denny's, I caught bits of an old man who was possibly a minister or priest explaining a lot of things to an elderly couple. I couldn't tell if he was using crazy religious stories to justify intolerance or tolerance but the bits I heard were intriguing. Something about an entire tribe of virgin women, something about how black people donate blood and most people don't care, how God split humanity into tribes, something about how we have an extra organ in our bodies, something about infections, which are made up of "basically vitamins and amino acids."

It was rather appropriate I was reading the rest of the latest Sirenia Digest, which I'd printed out for myself. "HIGHWAY 97", a good Dancy story where the sanest person around is a talking dog who sings hymns followed by a footnote to a story in the Digest's previous issue, "Cages". This footnote dealt with legal and religious concerns regarding the humanity of severely genetically modified people. I would suggest, legally, a jury would find the man who killed such an individual guilty of murder on the grounds that the entity he killed was in all respects human at one time and had to all appearances retained human intelligence.

Speaking of not being sure who's who or what's what, I watched a 1988 production of Twelfth Night. I'd started watching another one from the BBC in the 80s but the performances were so remarkably bad I had to stop. I had to choose between that one, which had period appropriate costumes and scenery, and the one I watched, which had good performances but had Victorian costumes and sets. I guessed I couldn't have everything. 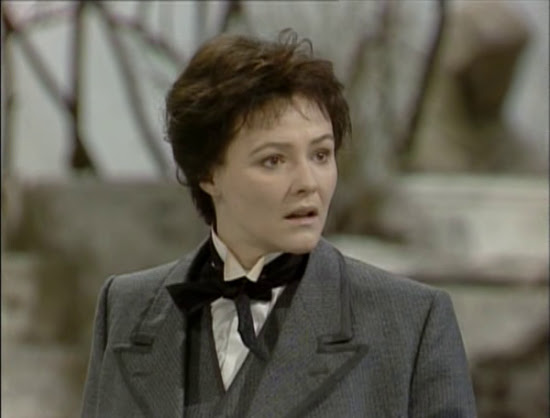 This one had Frances Barber as Viola, who Doctor Who fans may recognise as the lady with the eye patch in the recent season. I'd also seen her as Goneril in Ian McKellen's King Lear from a couple years ago, and in all cases she puts in a very good performance, though, actually, close to the same performance in each case. But not bad.

In fact, aside from the anachronistic mis-en-scene, the only problem I had with this Twelfth Night--which was directed by Kenneth Branagh (the production of the play, not the video)--was Feste, the Fool. It was decided the Fool in this case would at all times seem world weary, wise, and bitter, and these are all qualities that are present in the character as written. As Viola observes, "This fellow is wise enough to play the fool; And to do that well craves a kind of wit." But I feel like she ought to be delivering the line with some surprise, as though it's an insight she's suddenly had into this man. Anton Lesser plays Feste less like an agile entertainer and more like a reclusive inventor. His singing is painfully 80s rock ballad-ish;

But, this was my other option;

I think I made the right choice.