To Be Kirk is to Always Touch Kirk 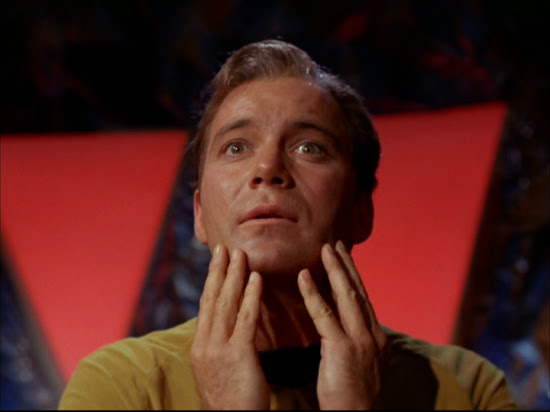 Never separate Shatner from himself. It's too cruel. It's like in the old south when husbands and wives were sold separately to different plantations.

This is from "Return to To-morrow", a pretty good episode about dead, godlike aliens who ask members of the Enterprise crew to allow them the use of their bodies temporarily while they built new android bodies for themselves. Things go horribly wrong, believe it or not. The alien in Spock's body ends up wanting to keep it and convinces the one in the body of Doctor Mulhall to try to keep hers too. This is Doctor Mulhall, who only appears in this episode. 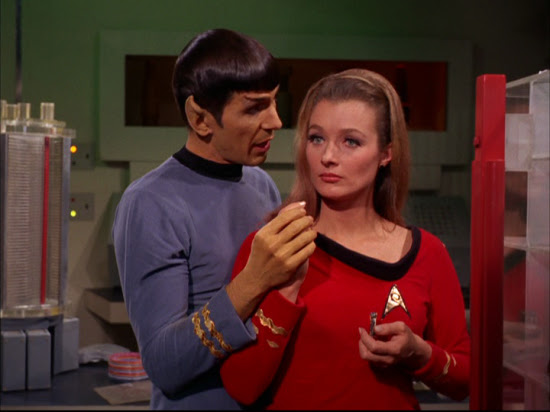 Kirk meets her in the transporter room for the first time when they're about to beam down to the planet. Her appearance interrupts his pre-beam huddle with Spock and McCoy and she's given a close-up from his POV with Most Beautiful Woman in the Galaxy strings on the soundtrack. And she was a looker, which made me almost throw up when I realised she was played by the same actress who played Doctor Pulaski on Star Trek: The Next Generation. Boy, it feels cruel saying that, but it is what it is. Well, to be fair, Pulaski was very boring and she did have a lot of dumb dialogue.

I'm running pretty late to-day because I forgot to set my alarm clock. Fortunately I don't have a very demanding day. Class to-night is just watching the rest of the presentations we didn't get through on Monday. The assignment was to give a presentation based on some aspect of Japanese culture with some visual aid--I did mine on actress Setsuko Hara and I showed clips from Ozu's Late Spring and Kurosawa's The Idiot. They seemed to go over well--I'd post them here, except studio Toho had YouTube send me an angry e-mail about a clip I posted from one of their moves a little while ago. Frustratingly, it was a movie that's not even available in the U.S. Even under the, to say the least, dubious idea that a free clip on YouTube is going to dissuade people from buying the movie--rather than encouraging them to buy it--it makes absolutely no sense and smacks of just a general blanket of corporate meanness.