When In Rome, Compromise Your Morals 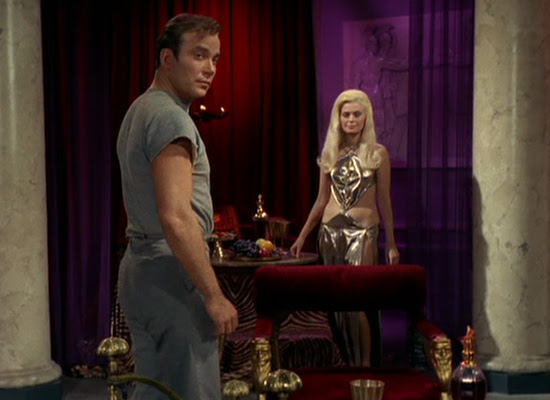 Is that Captain Kirk or Bluto from Animal House? He's about to fuck a sex slave in any case which brings us to another edition of Yes, This is a Real Episode of Star Trek.

"Bread and Circuses" is a second season episode of Star Trek, one which sees the Enterprise crew encounter a version of Earth where the Roman empire has advanced into the twentieth century and gladiator blood sport has become a reality show, but remember The Hunger Games ripped off Battle Royale and there's no way this has been a plot device that's been floating around for centuries. 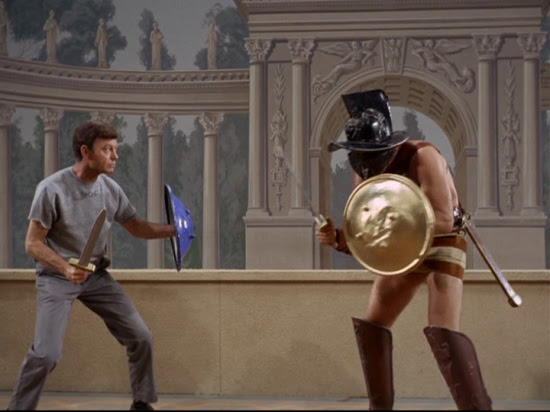 Kirk, Spock, and McCoy beam down to the planet in their normal uniforms carrying phasers and communicators and proceed to have a discussion about the Prime Directive and how they should avoid letting any of the planet's inhabitants know about life on other planets and advanced technology. Their conversation is interrupted when they're captured by the planet's inhabitants who take their technology and begin enquiring about Spock's ears. This episode was written by Gene Roddenberry and Gene L. Coon.

The three are eventually brought to fight in the arena, except Kirk, who dines with the guys in charge as they try and convince him to share more of his technology. One of the people in charge has the sex slave brought to Kirk's quarters and Kirk, who has been on a high horse about a culture that runs on slavery apparently decides its okay to go a little native.

It all makes the coda scene, where the three of them are safely back on the bridge smugly talking about how wrong the Romans were, come off as just a touch ironic.

The episode does have a few genuinely good moments. I loved McCoy fighting in the arena--Spock easily outmatches his opponent, but skinny little McCoy can just feebly hold up his shield. "Defend yourself!" pleads his opponent to which McCoy irritably replies with some bruised pride, "I am defending myself!"

He and Spock also have a nice moment in their cell;

Posted by Setsuled at 4:15 PM
Email ThisBlogThis!Share to TwitterShare to FacebookShare to Pinterest