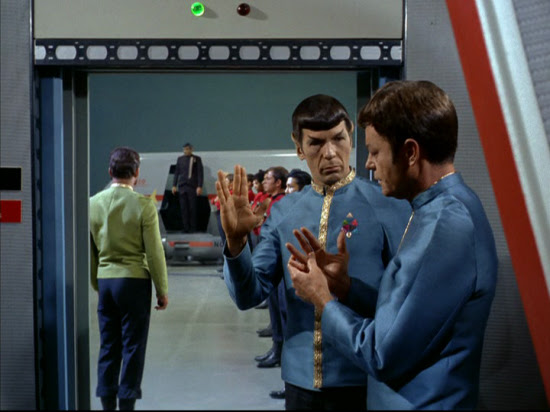 Watching the show in production order is really starting to pay off as it's at around a third of the way through the second season that the Kirk/Spock/McCoy chemistry has really started to come together. The three play off each other so perfectly, Kirk arbitrating the poles of Spock's reason and McCoy's never-ending exasperation.

"Journey to Babel" is about Spock's parents, particularly Sarek, and it's strange how much Sarek looks the same as he does in the Star Trek: The Next Generation third season episode I watched relatively recently, written by Peter S. Beagle. The plots are somewhat similar, too, both featuring Sarek experiencing a serious health issue which requires an Enterprise crew member to put himself in jeopardy in an intimate situation with Sarek, Picard in the Next Generation episode and Spock in the original series episode, which is written by D.C. Fontana, who I only just last night realised was a woman. I guess I assumed they only let guys write lines for Kirk. She might be one of the best character writers for the original series and I like her comments about the episode quoted on the episode's Memory Alpha page.

It's something you see too infrequently in the first season, a dispute between characters that doesn't arise just from one character being weirdly dumb.

Posted by Setsuled at 5:08 PM
Email ThisBlogThis!Share to TwitterShare to FacebookShare to Pinterest