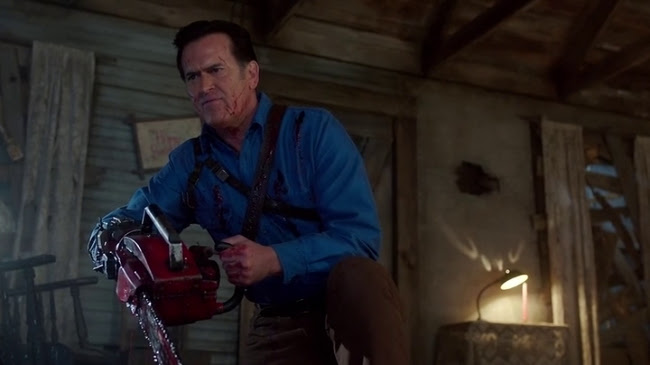 Well, I'm glad I finally caught the newest Ash vs. Evil Dead last night, the penultimate episode of the season. It's the first one since the third episode I really didn't want to end. 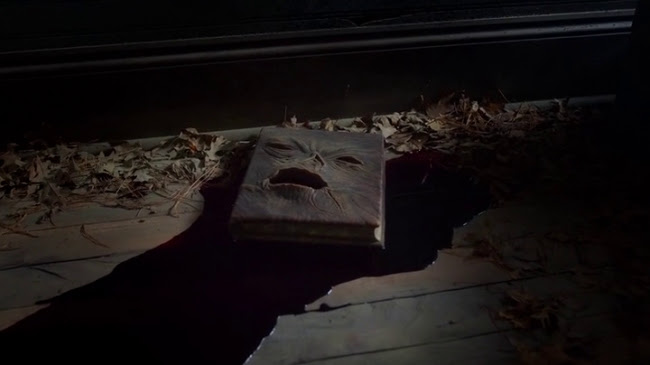 So many cool moments; Ash and Deadite Ash each trying to prove himself a racist, Ash chopping up his clone and wondering if "one day that'll seem weird." Kelly's story about breaking a stained glass window--this was one of the strongest episodes for female characters with Ruby returning and Lucy Lawless' badass delivery finally carrying weight as she casually dismembers the corpses of Deadites she's killed. And the tension in the climax of the episode really worked. 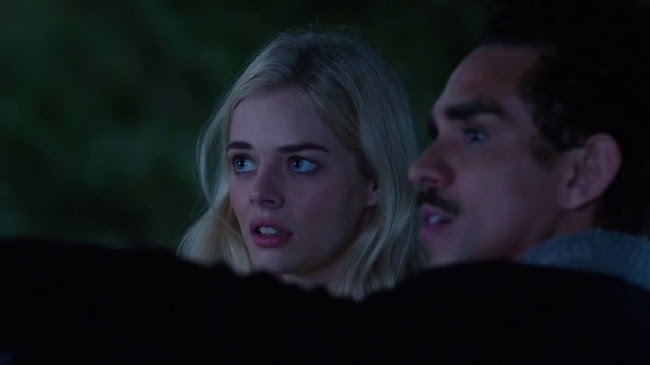 I wonder if I'm the only one hoping the cute blonde hiker becomes a bigger character. As Pablo says, all we know about her at this point is that she's hot and Ash says that's all we need to know. Of course that's why I want her to stick around but what Ash doesn't know is that pretty girls are a dime a dozen on television, a good TV show looks for a girl with personality.

This brings me to another topic I meant to address regarding Force Awakens--yes, I've still more to say about the new Star Wars movie. This time the topic is sex.

One review I read referred to Finn and Rey's relationship as "chaste". This reviewer had never seen the original trilogy so she probably didn't know what a contrast this was to the relationships between Han and Leia and Luke and Leia. But she's right, aside from Finn asking if she has a boyfriend and maybe grabbing her hand a few times we never get any indication he's attracted to her and we never get even one hint that she's attracted to him. Though her lack of apparent lust for Finn ties in with her character's chief attributes of purity and slight otherworldliness. Her tender kiss of his forehead seemed like the bestowal of spiritual favour while Leia's kiss on Luke's cheek in a moment of peril for luck seemed like her getting carried away with her hormones.

One of the great things about the original trilogy is that the adolescent sexual awkwardness is not one sided. Han is both too smug and quite correct when he says he "must have hit pretty close to the mark to get her all riled up like that," which Leia proves by kissing Luke in retaliation.

Aside from Jar Jar Binks, the biggest failing of the prequel trilogy is in the romance department. I actually think Anakin is an interesting character but the weird, ornamental relationship and stilted dialogue between him and Padme is a far cry from the organic messiness of the original trilogy. How could the same George Lucas who made Episode IV have made the lame, lofty flirting in Episode II? Perhaps this is partly explained by the fact that Lucas had just come off of directing American Graffiti when he made Episode IV and was tapped into the insecurities about pride and identity and need for acceptance tied into adolescent lust.

The impression of vulnerability that came with this group of kids flirting with each other and trying to stay alive made the contrast with the angry, sure, and implacable Empire all the more effective. In Force Awakens the dichotomy is almost reversed with Kylo Ren having all the doubts and internal conflicts and Domhnall Gleeson's over the top, Nazi-esque General Hux coming off as nowhere near as psychologically stable as Grand Moff Tarkin or Admiral Piett. Force Awakens feels less about kids versus the adult world and more about confused twenty somethings against each other.

That still doesn't explain why the characters seem less sexual. Although J.J. Abrams says Disney gave him a free hand I wonder if it was the company's influence that caused him to tone down any hint of lust which, in trying to make a movie that hearkened more to the original trilogy than the prequels, you'd think would be a key component. Abrams had plenty of sex in his Star Trek films with Kirk juggling college babes and even Spock giving in to his feelings for Uhura. Partly I wonder if it's the pressure of political correctness--after the flak he took for showing a beautiful woman in her underwear in Star Trek: Into Darkness it's hard to imagine a golden bikini turning up in his Star Wars film.

There is a growing desire to see sexual fantasy kept separate from other kinds of fantasy. Spider-Woman can't be shown in a sexually provocative manner as we learned after a vociferous reaction to a cover by erotic artist Milo Manara. Charges that the cover image showed Spider-Woman in a submissive position unlike any Spider-Man had ever been shown in were rebuked by quickly furnished evidence of Spider-Man in similar poses though the momentum against fetishisation of fantasy characters had too much strength for the counterargument to have much effect. Of course, there's a difference between portraying a character to be sexually attractive to the audience and portraying characters as being susceptible to influence from their own sexual urges. But the distinction between the two may have seemed too nebulous and hazardous.

To put it another way, filmmakers and audiences to-day are much, much more sexually conservative than filmmakers and audiences of the 1970s. Sex has become something more mysterious and frightening. A woman portrayed in a sexually suggestive manner might be a threat to women and it's the uncertainty more than the real knowledge that provokes the backlash. Showing two characters actually motivated by sexual urges is a mine field if you don't know what you're doing and I'm not sure modern filmmakers do. I was surprised how few people complained about the fetishisation of the rape scene in Zack Snyder's adaptation of Watchmen compared to the much more effectively conceived and ugly scene in the comic. The average artists of to-day are losing touch with the ability to effectively portray human libido and when they try you get a surprisingly adolescent product rather than an adolescent character. An adult like Snyder lovingly moving his camera over Carla Gugino's hip because he's filming a sex scene and therefore assumes it needs to appeal to him, not realising that he's locking the audience into the subjective perspective of the Comedian. Taking the perspective of a rapist in a work of art might be valid if that is your intention for one reason or another but is rather embarrassing when it's not your intention.

So possibly to avoid any potential pitfalls but more likely--I think--because it simply happens to be where people are now in terms of sexual maturity, Rey and Finn will, at most, hug in Abrams' film. There really is an extraordinary amount of hugging in Force Awakens. It feels to me like a reflection of the modern audience, I think hugging is as far as most young people prefer to go nowadays.