I told Manny, the maintenance guy at my apartment building, that I'm starting to really think I'm cursed. It's now three years in a row I've suddenly found water raining down from my ceiling. And every time it's been for a different reason. Last time it was because my upstairs neighbour had dropped a fish tank. Last night, while I was inking and my rice was cooking, two hours before I needed to go to bed to get up early this morning, It started coming down from the light in the centre of my bathroom ceiling.

I was strangely calm, even though I had no idea how I was going to stop the water from flooding the floor and meaning I was going to have to get my floor torn out as well as my ceiling. It's become kind of routine. I did manage to save the floor, though, by re-purposing my kitchen trash can. I then went upstairs to knock on my neighbour's door to notify them they've lost another fish tank or their bathtub's overflowing, hoping it wasn't because someone had lost consciousness in the shower. But there was no-one home or at least no-one was answering the door. So I called the number for my apartment building management which after two prolonged electronic messages I finally got to the "emergency maintenance" voice mail. I left a brief description of what was going on, I waited and finished making dinner while listening to steady drips and wondering how long I was going to be without a bathroom. I finally received a call back fifteen minutes later to inform me I'd called the wrong Pacific Bay Club--the name of my apartment building company. Apparently there's also one in Arizona, which was surprising given, and my geography is admittedly fuzzy, I'm pretty sure there's not a Pacific Bay in Arizona.

So I went through the same routine with the correct number and Manny showed up. He's a really nice guy and I was sorry to have pulled him in during his off hours. Turns out the culprit is a burst pipe this time and I'm going to have to have a dehumidifier in my apartment for at least four days. I have this bad feeling it's going to be worse than that. At least I'm going to have a bathroom, albeit no shower, for now. If someone had asked me "What would be the worst time for this to happen?" this weekend might have been high on the list since I have to work on final papers and projects for school. I had planned to spend all day Friday on my twelve page paper for Star Trek class. 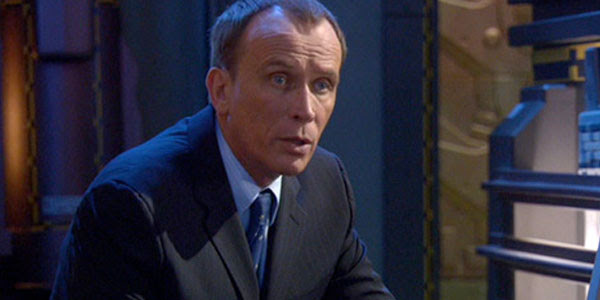 We watched an episode of Star Trek: Enterprise in class yesterday, the second we've watched overall and therefore the second I've seen this decade. The first one, "Stigma", wasn't bad, about how Vulcan mind melds were once taboo and had a communicable disease. The second one, the one from yesterday, wasn't great, but it had Peter Weller. Called "Demons", from the final season, it clearly reflected the vastly reduced budget the show was working with. It had one of the worst faux outdoor sound stages I've seen in any Star Trek series--including the original series. Weller played the leader of a Nativist movement that wants to kick all aliens off of Earth and I remarked that it seemed like Peter Weller was actually playing Donald Trump. The professor and several students concurred.

To-day in John Milton class, the professor began talking about Trump while discussing Samson Agonistes and how it provides insight into the mentality of terrorists. The professor unabashedly referred to Trump and the tone of his and his followers' rhetoric as fascistic, going so far as to invoke 1930s Germany. I've been surprised how comfortably people have been invoking Nazi Germany the past few days in discussing Trump but, for once, it is certainly a fair cop. When you talk about expelling an whole group of people from the country for their religion, you're going to sound like Hitler in a rather significant way. There are a lot of differences, of course--I don't think Hitler and his anti-Semitic rhetoric met with the kind of ridicule in Germany that Trump is the butt of to-day. And yet the reason Trump is frightening is because of how well he does in polls. It points again to the disconnect between two ideologies in the U.S. Liberals like me are generally surprised when they hear Trump has so many supporters. Hell, prominent conservatives are surprised and repulsed. How can so many people live in the same country and be so distant from each other? It's like two gorillas in a room completely unaware of each other's existence.

Well, on the subject of politics, there's video now on YouTube of a performance of scenes from Henry IV: Part One I took part in for my Shakespeare class. Our group appointed a director, Sam (who plays Worcester), who chose the modern day setting of Washington D.C. I prefer setting Shakespeare plays in the time and place Shakespeare intended but I guess it would have been unfair to ask everyone to buy elaborate costumes. Anyway, I chose the play and edited the script so I didn't want to tyrannise creative decisions from there. I play King Henry IV--I turn up at around 8:50 though you can hear my voice at the beginning because I decided to give a brief introduction filling people in on the events of Richard II, the play to which Henry IV is essentially a sequel. The video is courtesy of the guy who played Hal, whose name is Chris, or rather his girlfriend, I think she took it with her phone. You can see my camera in the upper right running out of battery in the hands of another student, Richard, who kindly agreed to record for me. There were three cameras total on the performance and only Chris' girlfriend's phone had the battery for it.

I managed to memorise my lines pretty quickly (much to my surprise) in a couple of hour long sessions alone several weeks in advance. After this, I compulsively repeated them to myself over and over in quiet moments, trying out different readings. I may never get the king's tirade to his son out of my head. Falstaff (played by a guy named Shannon) is still my favourite character but this experience made me appreciate the king a bit more.