The War in a Haberdashery 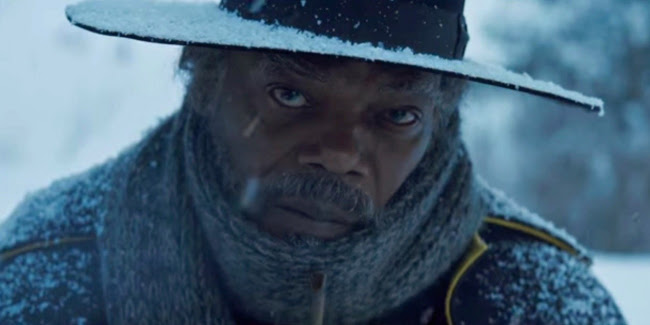 A bunch of nasty, ruthless people, lots of blood and swearing, and gorgeous snowy wilderness outside. Quentin Tarantino has said his 2015 film The Hateful Eight was intended to be a film with "no moral centre". Just a bunch of villains, basically. That's not precisely what we get but instead of the big, splashy eye for an eye moral tales of his four previous films The Hateful Eight is about finding that one tiny sliver of justification, the right jelly bean, if you will, to tip the scales and make it best for some people to die and some people to do the killing. With brilliant performances and a mostly clever closed room plot, this is a very good way to spend three hours.

If you can catch the roadshow version, I recommend it. I talked about this when I talked about the Hateful Eight Comic Con panel. Known for trying to bring back ways in which filmmaking was better in days past than it is now, this time Tarantino is not only shooting on film in an age increasingly dominated by digital but has also resurrected the 70mm lens. This ultra-wide Cinemascope lens was used on William Wyler's Ben-Hur among other epic films of the 50s and 60s and it creates an image much, much wider than it is tall. Hateful Eight uses this width first to show the small, vulnerable stage coach making its way through a huge, white world of blizzard and then the wide lens is employed in a very small space, a cabin where we watch the titular eight and are invited to view many characters at once. In this way, the audience is rarely forced to pay attention to a central character and yet Tarantino skilfully always sets up an object. Though the subject is often tantalisingly vague. With no moral centre, the point of view is also always in question. Everyone in this movie has secrets or potentially has secrets and they're always something pretty nasty.

We do meet some pretty decent people but they don't last too long. However, they do provide the movie with a list of the motherfuckers who really deserve killing. Those who might suggest this is the first Tarantino movie since Jackie Brown that is not a revenge fantasy will be wrong.

Set a few decades after the American Civil War, the film uses characters' pride in the Confederacy or Union as a starting point to discuss the subjective nature of the flags everyone fights under. Whether this be of nation, race, sex, or profession. The movie ultimately presents the fragility of such pride and its usefulness to these people extending only so far as their personal motives go. The result is an insight into human nature at its rawest by finding that tiny point of fantasy wish fulfilment.

All of the actors are good, particularly Samuel L. Jackson and Jennifer Jason Leigh, the latter having a very effective musical moment with the folk song "Jim Jones at Botany Bay". This was to be a film with an entirely fresh score by Ennio Morricone, the great composer whose works Tarantino has borrowed from many times. However, while some new Morricone music is in the film The Hateful Eight also makes use of some of Morricone's previous scores, particularly John Carpenter's The Thing, a film that also starred Kurt Russell. It's appropriate for more than that, though, also being a film about a small group of people trapped in a remote, snowbound location facing gory death. The rough cello track "Bestiality" is brilliantly repurposed from extraterrestrial threat to a very human animalistic behaviour.

Guitar caterpillars pile the blame
On butter just for cleaning oil looks
That's beautiful, becoming Buggy Dame,
The one who gets a rep for noodle books.
I felt an iron string falling near
The quickly sketched and wooden stair inside
What looks like mansions made of adult deer
All locked in brainless teeth and old fluoride.
A timely tartan stood back from bamboo
And sauced fortuitous tofu took pepper home
To hold, withstand, and flaunt storied taboo
Wherever mounted antelope heads roam.
Without some milk the cracker gives to us
A snack we can presumably still trust.

Posted by Setsuled at 3:29 PM
Email ThisBlogThis!Share to TwitterShare to FacebookShare to Pinterest