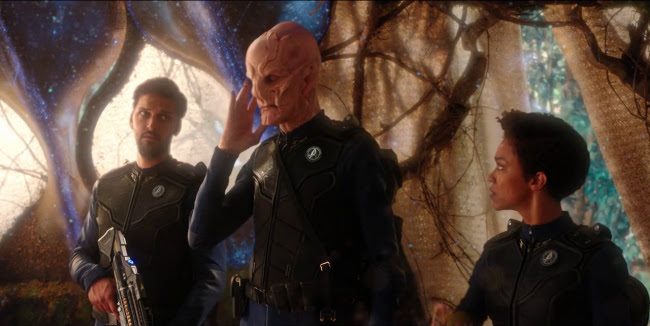 Thanks to some improbable alien misunderstandings, Klingons and Starfleet came together in several ways in last night's new Star Trek Discovery, "Si Vis Pacem, Para Bellum", a Roman saying which translates to "If you want peace, prepare for war." One Klingon seems to espouse the likely meaning of the term in this entertaining episode--that is, conquer everyone and everyone who serves under you will be at peace. But the phrase took on new meaning by the end of this episode from Star Trek novelist Kirsten Beyer. 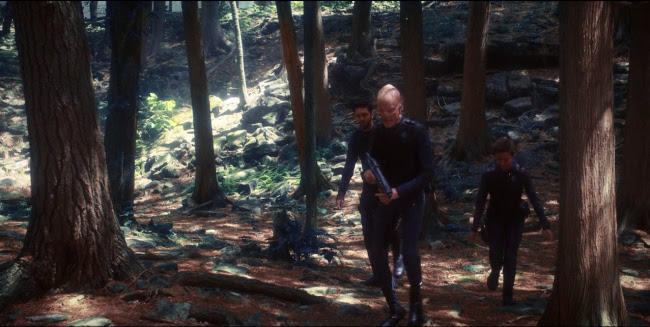 For those of you who missed it, here's a recap:

Though unlike "This Side of Paradise", it's not a child, foster or otherwise, of Sarek and Amanda who's treated to a new emotional state but Saru (Doug Jones) who discovers what it's like to live without fear for the first time, and he does it without the Partridge Family ambience of "This Side of Paradise" or the hokey faux Native American dressing in "The Paradise Syndrome". It's kind of a surprise the word "Paradise" isn't in the title of this episode. 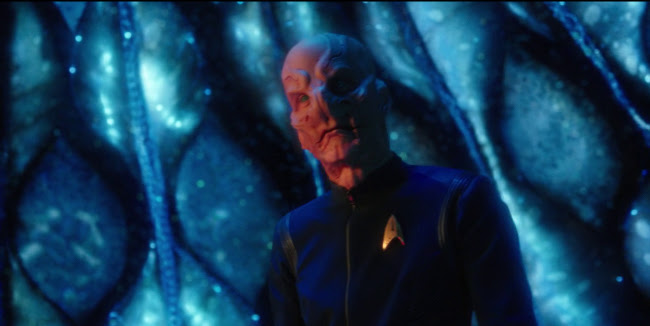 Instead we have Na'vi-ish blue dots which look like not so distant cousins of the spores which power Discovery's drive. I've been waiting for an episode where Saru isn't just a pain in everyone's side but I guess this wasn't it. Except for saving Lorca (Jason Isaacs) and Voq (Shazad Latif) a few episodes back virtually everything Saru does hampers our heroes in some way.

Meanwhile, the no chemistry attraction between Voq and Michael (Sonequa Martin-Green) gets physical and she ends up kissing the mouth that ate Georgiou. Possibly it's her first kiss. Sometimes I think the writers really hate Michael. 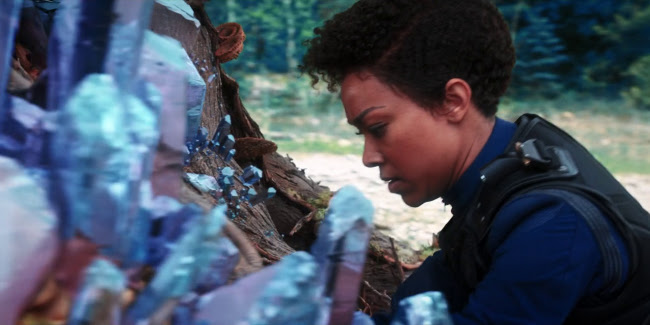 But the big crystal transmitter spike was really pretty. I kind of liked the scenes where Admiral Cornwell (Jayne Brook) is in captivity. Her and L'Rell (Mary Chieffo) trying to read each other was pretty good. Does L'Rell really want to defect? What would that mean for Voq, still improbably undercover as Ash Tyler? It doesn't seem like either one of them would betray the memory of T'Kuvma but T'Kuvma's motivations for going to war with the Federation were never clear so who knows.

The building shapes disperse in blacker clouds.
The edges soft and dark revert to dust.
But were the rounded fogs but heads in crowds?
A vapour bridge's whisper told in trust.
To-night the sun became but yellow drapes.
Descending flares forgoing dusk for noon.
A shimmered screen the boiled summer apes.
Organic scents've tickled this the moon.
A foil star careens around the tin.
Repeated metal echoes round the night.
An iron world reverts to endless spin.
Somewhere a clog permits but little light.
A silver necklace glimmers through the smoke.
By hollow rusting horns was silence broke.

Posted by Setsuled at 1:19 PM
Email ThisBlogThis!Share to TwitterShare to FacebookShare to Pinterest