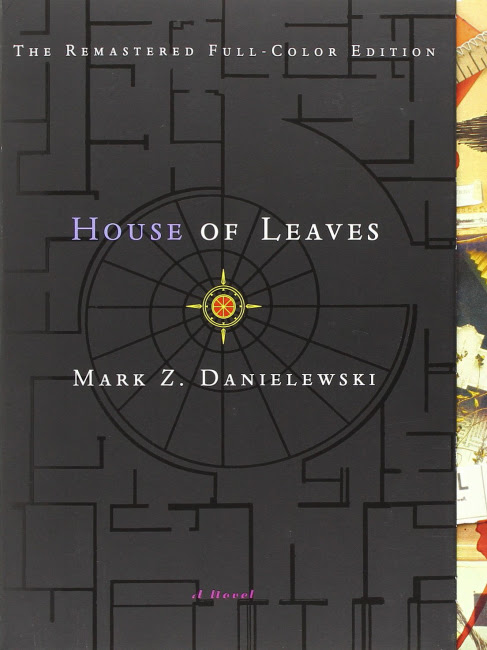 I'm glad I spent a couple years at a university before reading Mark Z. Danielewski's House of Leaves, a remarkable and enjoyable work of fiction that doesn't merely satirise academic analyses. Though they're frequently filled with colourful and fascinating insights, the book uses these analyses as a setting, using them to effectively evoke the impression of a labyrinth, of disconnect through obsessive focus. It captures that strange feeling that too deep a dive into analysis can lead to one feeling trapped in a state of ever circling but never touching an object. Using footnotes as a storytelling device, as well as creative formatting involving margins and blocking, Danielewski weaves together the probably false ramblings of a troubled young man, Johnny Truant, with the possibly false critical analysis from a dead blind man, Zampano, of a film that may not exist.

Danielewski self-consciously introduces a variety of references and allusions. They serve as grist for the mill of endless critics and psychologists, whose 300 page books focus on minute aspects of the film which Zampano quotes in his own footnotes. The most prominent motif is that of the labyrinth, something evoked most spectacularly in the ninth chapter. Zampano's description of a film called The Navidson Record, which reminded me of a few books of I've read on films, and dry gathering of various analyses, is taken over by footnotes crowding from the margins, some providing only insanely long lists of examples. One footnote becomes simply a list of names of filmmakers whose work The Navidson Record in some way resembles, these list footnotes printed sideways or in little boxes. The effect this has is to make one feel lost and a bit dizzy in a chapter about a group of men lost in a supernatural structure that generates new rooms and hallways. I don't know about you, but my eye always automatically wants to search out the footnote corresponding to a number, or if I don't, then trying to keep it in mind makes it harder for me to focus on the main narrative. When footnotes start to pile up, it can drive me to distraction--this is one of the reasons I tend to prefer older history books. I have a really nice book on 17th century England edited by Blair Worden that has lots of full colour illustrations but I find it hard to read because of how many inserts and side notes it has. I think a lot of people putting text books together assume the way attention spans work now--because of the internet--requires texts that can never stick to one narrative flow. And maybe some people do prefer that but I'll take one thread over a ball of yarn any day. Though I appreciate Danielewski exploiting my possible cognitive deficiency.

Johnny Truant's footnotes quickly become personal stories one suspects are almost all lies. He talks about his shyness and his addictions while also talking about a series of gorgeous women he sleeps with. His rambles feel Beat inspired with their focus on messy and dirty life and casual insertion of rhetorical playfulness, as when he adopts the long s, that looks like an f, after Zampano quotes from a 17th century journal. Though Johnny flatters himself a lot more than the Beat writers--his description of attacking a man near the end has the violent wish fulfilment juice of a Frank Miller comic--he becomes a more organic counterpoint to Zampano's stuffiness, sometimes a welcome respite though the main attraction for me were the Zampano sections and the Lovecraftian Navidson Record. Danielewski takes the sinister "wrong geometry" concept Lovecraft employed so well in stories like "The Dreams in the Witch House" and uses it in a nice way to reflect the psychological themes of a couple growing more distant. Navidson's ambitions to explore the dangerous mystery of the house (a word always printed in blue in the book) is like a manifestation of a repressed urge to break away from the domestic life he's agreed to live with Karen, his lover and the mother of his children. There's effective horror in this and black humour, too, as Navidson's brother, in reference to his drinking, quotes Dean Martin to say that you can always depend on the floor to be there for you. And then the floor betrays him.

Truant and Zampano form a dichotomy that parallels Navidson and Karen in that both seem to be circling a problem from opposite poles while existing in realities where it's absolutely impossible to bridge the gap or reach the centre. Johnny with his obsessive focus on himself and Zampano with his obsessive focus on other voices. Yet in this book the two are bound together.

I've said before I love stories about people trapped in a house or hotel and this book really took that genre to new heights. A really enjoyable read.