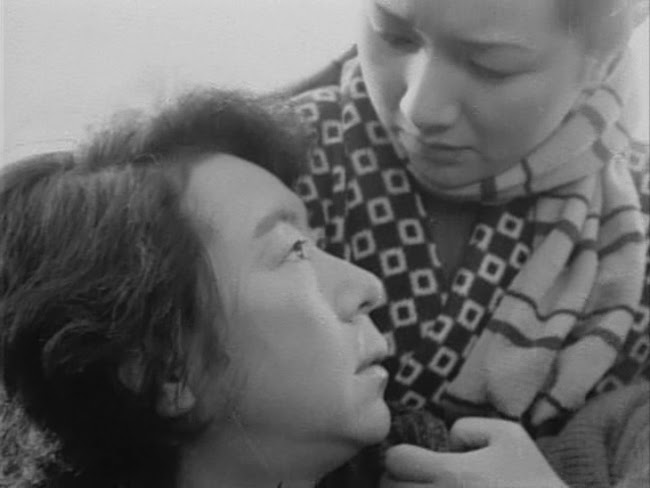 Perspective is everything in 1953's Where Chimneys are Seen (煙突の見える場所), even when it comes to the chimneys. In some parts of town, you can see four of the great smokestacks at a nearby factory, from other places it looks like there are only two, or three, or one. They preside over a drama in the town about relationships, the roles of women, and the nature of marriage and parenthood in this charming post-war film from Heinosuke Gosho. 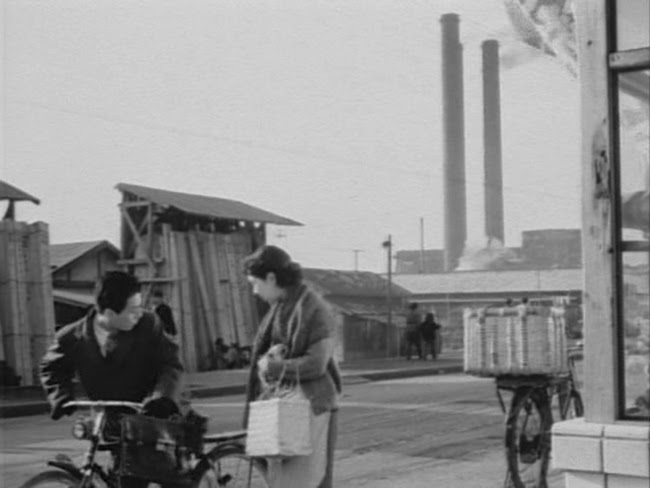 The film begins with narration from one of the central characters, Mr. Ogata (Ken Uehara), telling us about those magic chimneys and seguing into describing the tenants of his ramshackle boarding house. But the film doesn't follow Ogata's point of view, focusing instead more on his wife, Hiroko (Kinuyo Tanaka), and two young people living upstairs, Kenzo (Hiroshi Akutagawa) and Senko (Hideko Takamine). 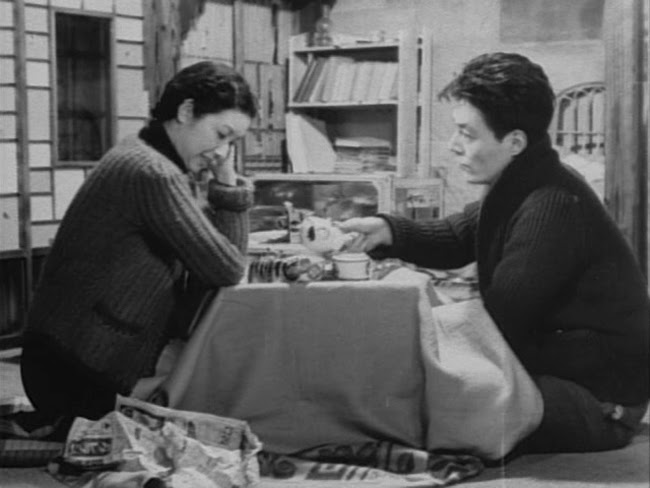 We soon learn that Hiroko is secretly working at the racetrack selling coupons--when an acquaintance spots her, she begs him not to tell her husband. It's not that she's unhappy her marriage, she just likes to have some of her own money. In fact, the Ogatas otherwise seem to be very conservative, Hiroko generally wearing traditional Japanese clothing. Hiroko is mortified when Senko comes home one day and accidentally catches sight of the older married couple embracing. Senko, though, has no idea why a married couple should be ashamed of being seen showing each other relatively mild physical affection. 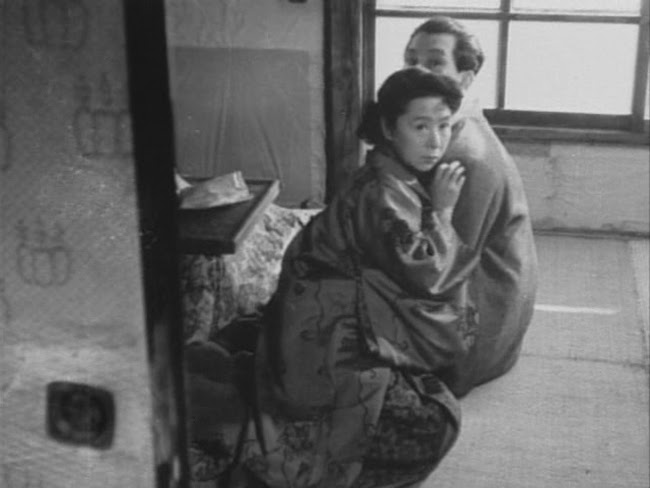 But a bigger issue than a secret part time job causes a rift between the Ogatas when a baby suddenly turns up in their home with a note informing them that the baby is Hiroko's. A man having an unknown child is plausible but Hiroko's startled denial of any claim to the child isn't enough to satisfy the paranoid and possibly a bit ignorant Ogata, partly because he's learned that Hiroko's first husband, whom they thought had died during the war, is actually still alive, possibly nullifying their own marriage. If they were nervous about making out as a married couple, they're both petrified at the prospect of having been engaging in physical contact technically out of wedlock. They immediately dig up the marriage license and both are a little relieved to at least see the paper still exists. 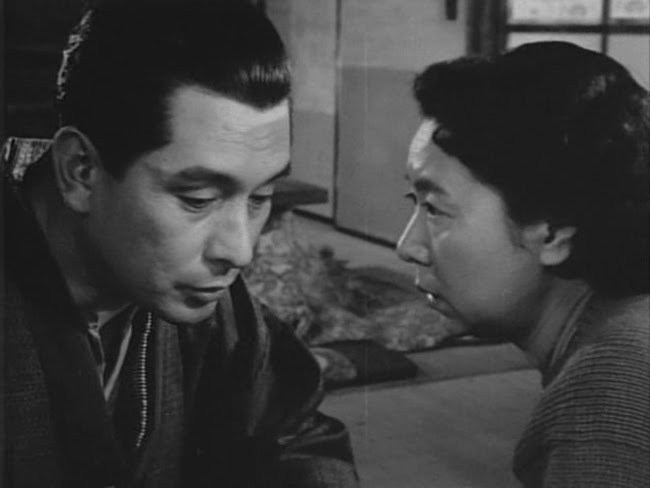 Meanwhile, Senko and Kenzo are debating about how reasonable it is to interpret certain signs between them as indicators that they love each other. Senzo even, quite sincerely, suggests they play simple games like Janken (a Japanese game similar to Rock Paper Scissors) where Senko promises to agree she loves Kenzo if she loses, but he's unsatisfied even when she says she wants to lose on purpose. Both are troubled when they constantly reach a tie. 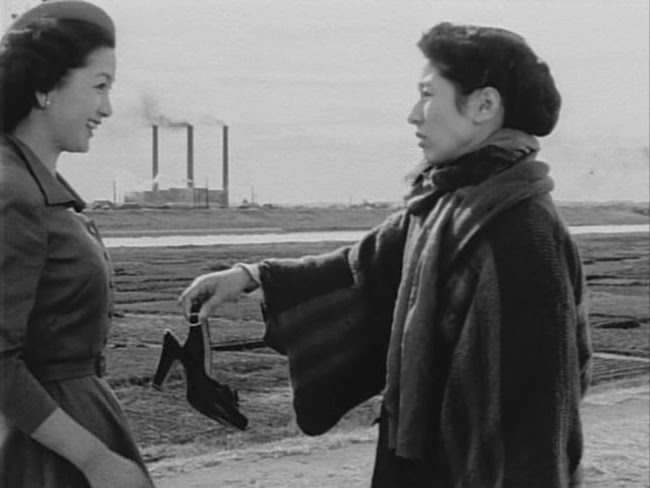 Like many post-World War II Japanese films, this film is filled with subtext about the conflict between the emerging, rapid prosperity brought by Western cultural influence and attachment to more traditional ways of thinking. A nice moment near the end has a carefree young woman in expensive Western style clothes gamely lending one of her pumps to a poor woman whose geta had broken. But the poor woman solemnly returns the shoe after walking in it a bit--it's the rich who can afford to so easily cast off old ideas. The young woman's response is to happily remove both her shoes and walk barefoot with the other woman. 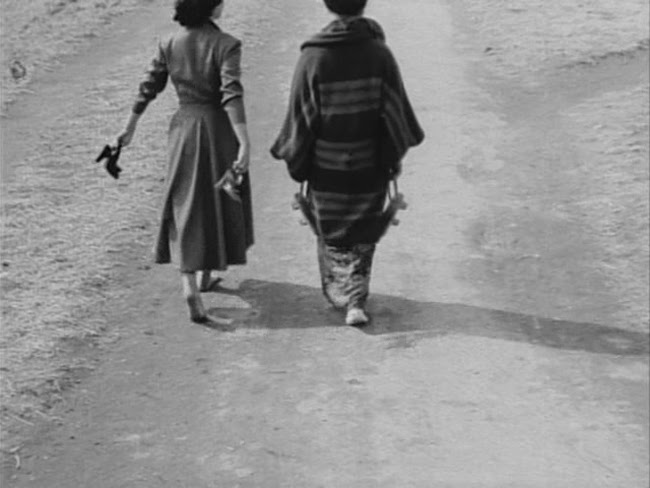 The jagged hand completes a circuit twice.
A bending face resorts to single meals.
A thousand years preserved in ticking ice.
Reflected moons collect in frozen reels.
A purple beam of light has slipped the reins.
A waiting rift returned to glue the boats.
Decisions hem the horses in their lanes.
Collecting in the net a thousand motes.
The rapid eyes aboard the train arrive.
A staggered carpet claimed a pretzel bag.
A wad of teeth as organs can't survive.
The wild brains were tranquillised and tagged.
Rotated views afford transforming towns.
The burger buns'll make for flaky crowns.

Posted by Setsuled at 11:14 AM
Email ThisBlogThis!Share to TwitterShare to FacebookShare to Pinterest