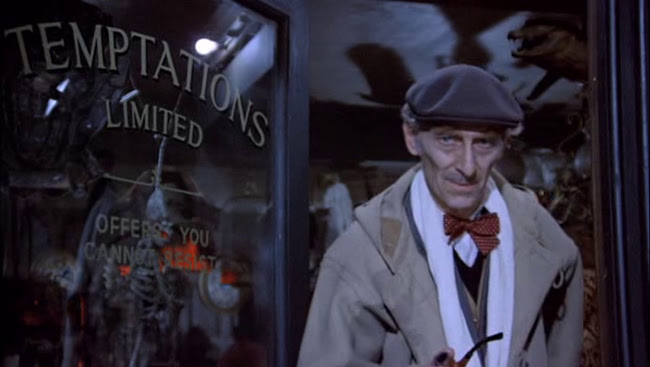 The final Amicus anthology horror film was 1974's From Beyond the Grave. Once again featuring a framing story starring Peter Cushing it has some of the best imagery of the series as well as some of the most moralistic subtext. 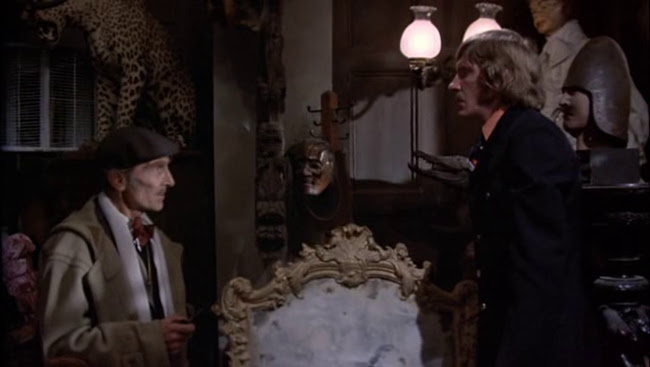 Cushing plays the owner of a little antique shop in which each of the protagonists of the film's four stories eventually finds himself. Each one who tricks Cushing in some way ends up meeting a horrible fate. Cushing is nice and subtle as the Proprietor, showing just a hint that he's consciously aware of the supernatural vengeance his merchandise is exacting on his behalf. 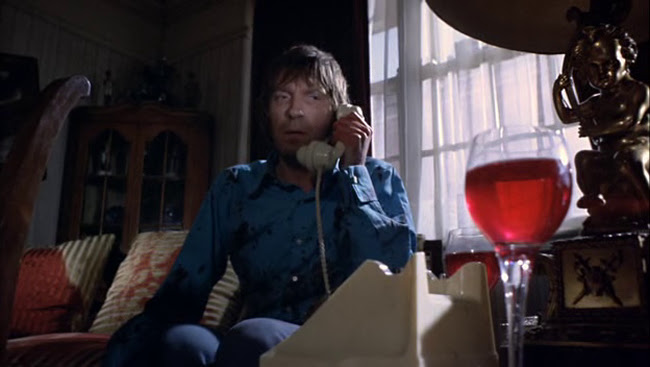 The first story stars David Warner as a yuppie who buys a mirror from Cushing. After holding a seance with a group of equally posh and shallow friends, he discovers there's a demon presence in the mirror which compels Warner to commit a series of murders. It's a pretty effectively creepy mirror effect. 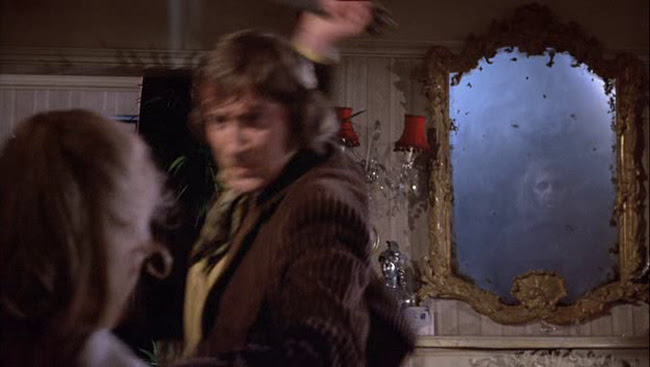 Warner nicely conveys the grief and horror of his actions as bodies begin to pile up. 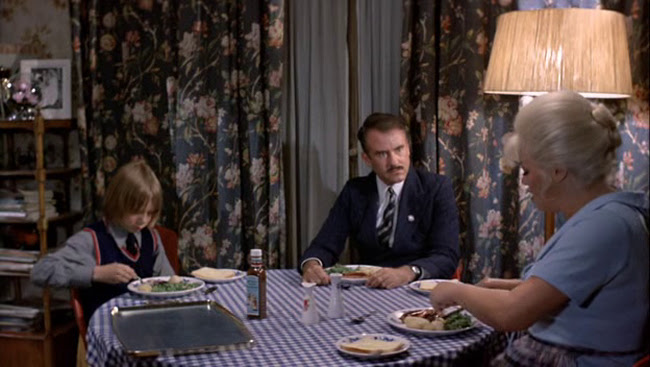 The second story involves a stiff necked employee named Christopher (Ian Bannen) frustrated by his marriage to a fractious Diana Dors. Which already makes me dislike him--anyone who gets to be married to Diana Dors should thank his lucky stars every damned night, I don't care how she acts. 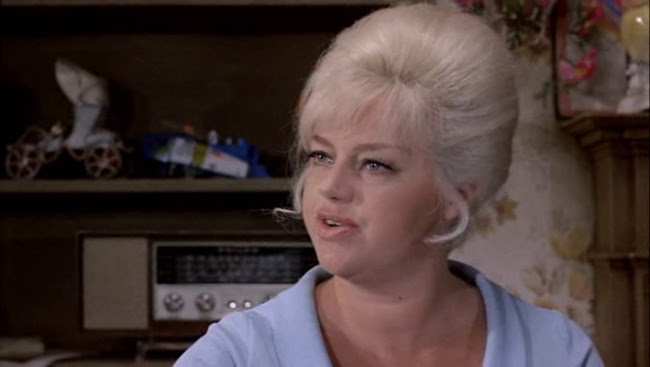 But the story concerns Christopher's encounters with an impoverished war veteran selling matches on the streets played by Donald Pleasence. Christopher buys a medal from Cushing to trick Pleasence into thinking he's a fellow vet and soon the poor man invites Christopher home and introduces him to his daughter, played by Pleasence's real life daughter Angela Pleasence. 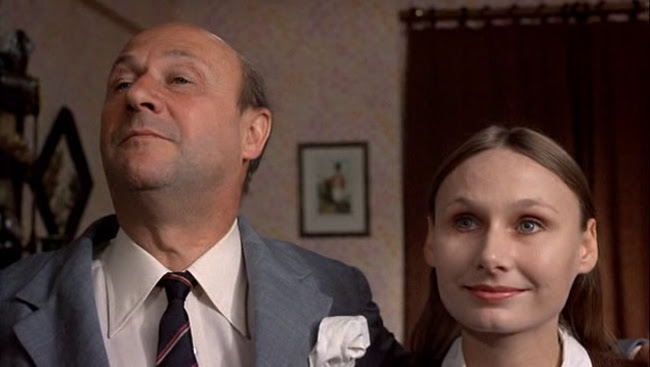 The family resemblance is clear and somehow makes the two of them even creepier. Why is that? Is it the reminder of the biological nature of human reproduction? 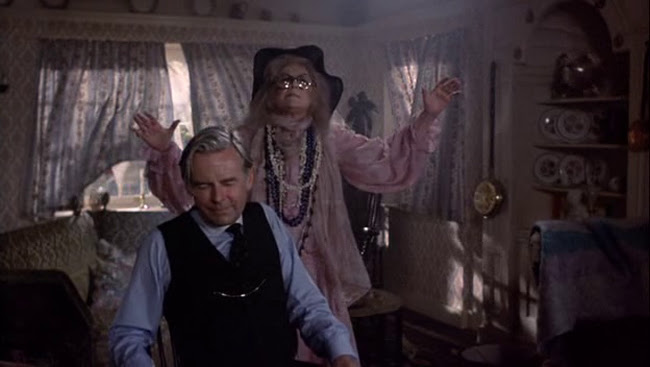 The third story is more of a comedy, starring Ian Carmichael who inadvertently brings home a demon along with a snuff box he swindles out of Cushing. He enlists the aid of a witch played by an amusingly dishevelled Margaret Leighton. The story ends up being both effectively light hearted and sinister. 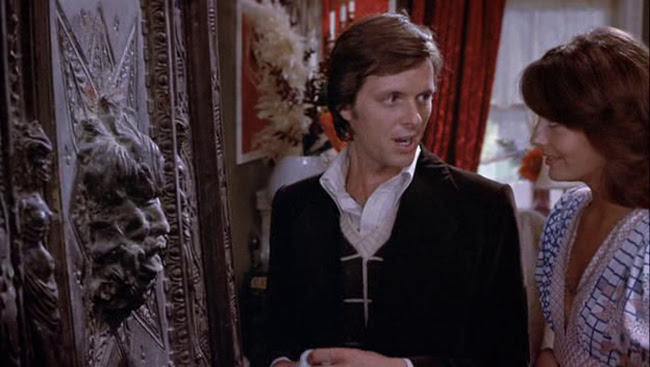 The final story involves a young man in the second brown corduroy sport coat of the film (it is the 70s, after all) named William (Ian Ogilvy) who buys a whole, huge, ornately carven door from Cushing. He brings it home and attaches it to a closet, an odd place for such an ostentatious item, as his wife (Lesley-Anne Down) remarks. But she needn't have worried because very quickly William discovers that sometimes the door leads to a room from the 17th century covered with cobwebs. 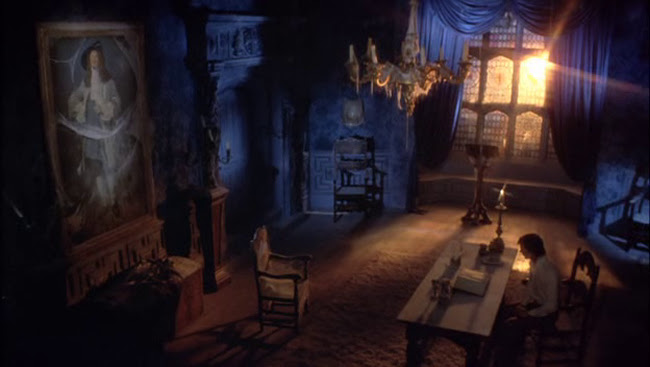 In many ways, this story is similar to the one with David Warner but it is very effective. The time and place distortion is played gradually enough to build suspense and eeriness and combines well with the over the top, haunted house quality of the strange room.

Posted by Setsuled at 11:30 AM
Email ThisBlogThis!Share to TwitterShare to FacebookShare to Pinterest