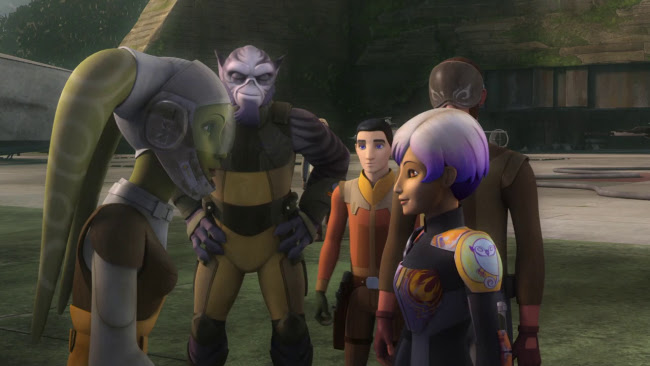 I finally got caught up on the new season of Star Wars Rebels, which as of Monday is eight episodes in. Unfortunately I'd been rewatching Clone Wars so the problems with Rebels were even more painful. It's not as bad as those excruciating Forces of Destiny shorts, there are one or two things about Rebels that'll keep me watching, among them the almost constant stream of stunt casting. Which is itself a sure sign the people behind the scenes are well aware the show can't stand on its own. 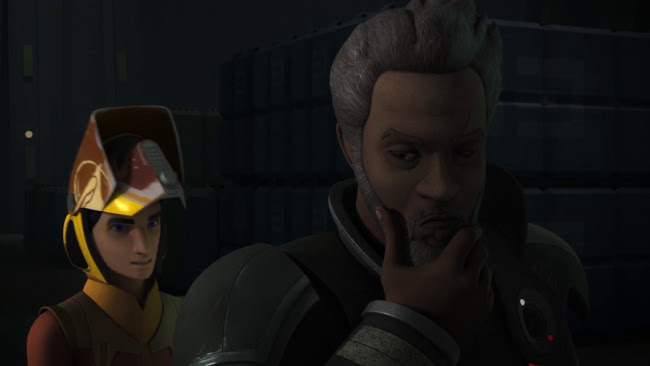 Why isn't Rebels as good as the cgi Clone Wars? I was still only in the first season of Clone Wars in my rewatch, generally considered the weakest, but even at that point the characters had better chemistry, the serial style plots were more exciting and unpredictable, and above all everything felt less sanitised than Rebels. Yet Rebels has many of the very same writers as Clone Wars--Henry Gilroy, Steven Melching, and of course the same showrunner, Dave Filoni. Disney has been unwilling to hire any of the female writers from Clone Wars for some reason--for obvious reasons as far as Katie Lucas is concerned but there's no reason they couldn't bring in Bonnie Mark or Melinda Hsu. Anyway, I'm starting to think the real missing element is George Lucas, not necessarily for what he contributed, which I suspect was more than seems obvious at first, but surprisingly for his willingness to get out of the way. 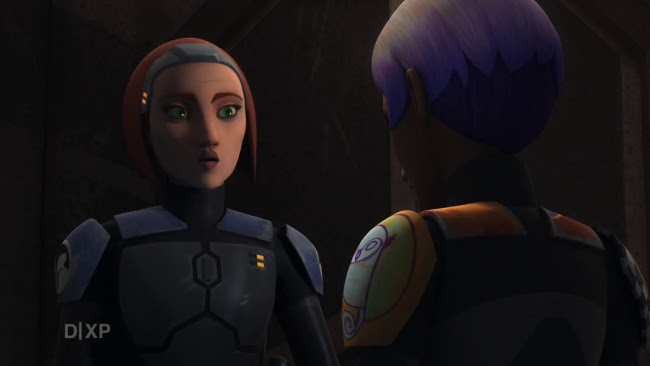 Katee Sackoff was the stunt casting in this season's two part premiere, "Heroes of Mandalore". Stunt casting on Rebels is either in the form of a celebrity voice (Tom Baker, Gina Torres), a character from elsewhere in the franchise (Ahsoka Tano, Princess Leia), or, as in this case, both since Sackoff is reprising her role as the Mandalorian Bo-Katan Kryze from Clone Wars. She's mostly in the background in these episodes, though, as Sabine (Tiya Sircar) and Ezra (Taylor Gray) are centre stage showing us the new ways they're going to be annoying this season--one of the show's problems, the seasonal rebooting of character development, probably arises from attempts to make things better. Ezra has gone from misfit street rat searching for his parents to wouldbe Jedi with the power to commune with and command animals to troubled, generic brand Anakin tempted by the Dark Side, to who he is to-day, which in the premiere seems to be Jar Jar Binks. 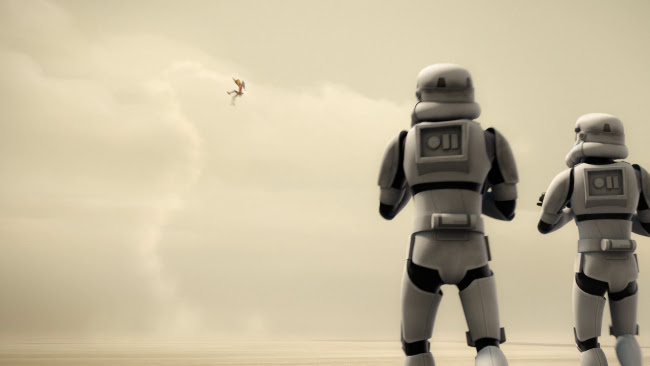 Jar Jar was one of the weakest aspects of Clone Wars so it's fitting that Rebels would choose to emulate him, making Ezra's latest personality and role that of the bumbling, anachronistically zany fool, comically unable to handle his Mandalorian jet pack but, like Jar Jar, somehow managing to accidentally take out the bad guys anyway. Sabine, meanwhile, who in the previous season looked to be on the path to being an imitation Ahsoka after Disney received so much flack for its poor attention to female characters, gives up the Dark Sabre she'd spent so much time training to use. Is there any talk of giving her a lightsabre? Nope. Not that I mind that she's not going to be a Jedi--the show needs fewer Jedi not more--but it doesn't help remove the impression of an untethered, schizophrenic production. 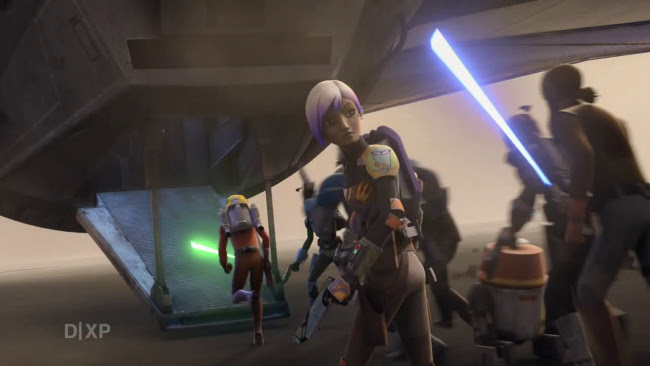 I say untethered but maybe I should say yoked. The first half of "Heroes of Mandalore" ended with what appeared to be the death of Sabine's mother, apparently killed by a weapon Sabine herself had designed. It was a stunning moment that gave me hope the show had finally found some guts and it ended with Sabine overcome by grief and guilt. But--right at the beginning of the next episode--look, Sabine, it's your mom, she's fine, she was just offscreen the whole time because nothing really bad ever happens to the supposedly desperate rebels fighting against the evil Empire! This certainly ranked among the worst, most awkwardly artificial moments in television of 2017. This season has so far of course seen Star Destroyers and Imperial bases destroyed while the Rebels get off scot-free again and again. Listening to the characters talk about how tough things are has all the charm of the poor little rich kid complaining about his caviare being served two minutes late. Obviously policy is running the show more than any storytelling instincts--or to put it another way, the show is more bureaucratic machine now than man. Though I am happy to see that policy has been updated to allow for romance and Kanaan (Freddie with a stupid fucking Z Prinze Jr) and Hera (Vanessa the best voice actor on the show Marshall) almost kiss. 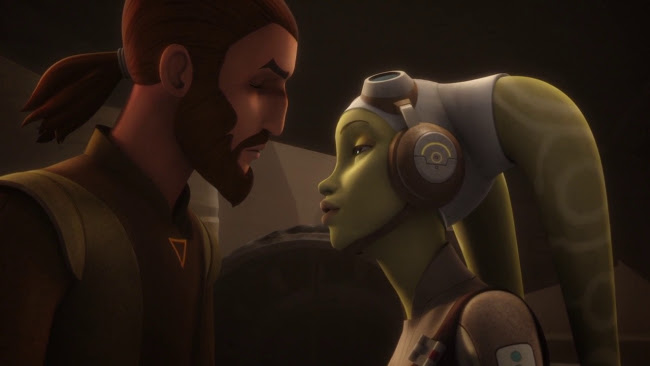 Hera is another reason I'll keep watching--I actually like her. I only wish she'd find a better guy than Soul Patch Jedi. In fact, more and more I've been building in my head-canon an impression on Rebels that makes it work with the rest of the franchise. What if the whole series is in fact Rebel propaganda produced during the period between Empire Strikes Back and Return of the Jedi? We know Hera is a real person because she's mentioned in Rogue One. What if the Rebel Alliance PR team decided to put out stories involving the famous heroic general Syndulla of the Rebellion? That would explain why the Rebels constantly win on the show, why the Empire's characters are almost uniformly baffoonish and one dimensional. And then we could say Kanaan and Ezra are totally made up so Luke showing up with a lightsabre isn't robbed of the impact it wouldn't otherwise have if there had already been two Jedi around just a couple years before A New Hope. This way the show would fit into canon while the franchise wouldn't be married to its worst elements. 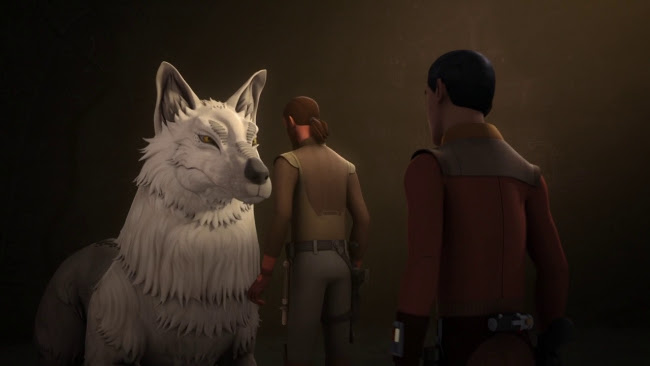 Which I've barely scratched the surface of, by the way. Monday featured a two part episode with a badly conceived homage to Princess Mononoke. Ezra's previous ability to commune with animals is of course never mentioned when the wolves from Mononoke show up to lead the group out of danger. The writers then introduce a big smoky ore crawler piloted by the episode's stunt casting, Seth Green as a ridiculously stupid lizard man the heroes are too stupid to keep out of audio range from the transmitter when Ezra uses it to try to fool the Empire. This ore crawler is introduced to show us that one of the best parts of Princess Mononoke, the fact that it doesn't demonise people trying to use metal in order to live, will be obnoxiously ignored.

I do like that they aged up Ezra and Sabine. If only they'd taken the opportunity to change Ezra's voice actor. It's amazing how everything he says sounds like a whine, I guess it's almost impressive in its way.