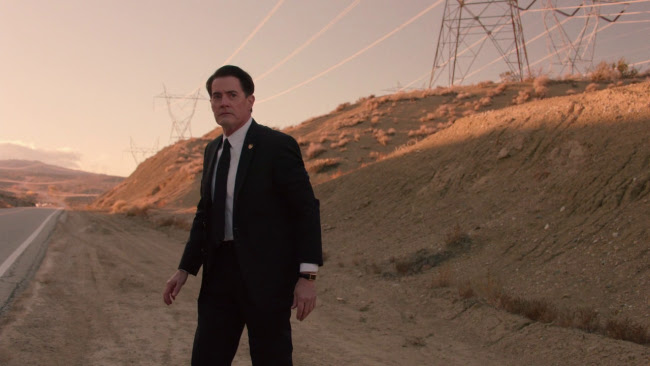 I just finished watching through the third season of Twin Peaks again. I really loved how David Lynch kept information about episodes out of the media before they aired--the experience of allowing a story on screen to unfold on its own terms is increasingly becoming too rare. I'm really disturbed by a diminished appreciation people are beginning to display for sensory experience, something Twin Peaks excels at and one of the things that makes it so distinct from other television series now. But watching it again, my appreciation for the show has deepened for watching it with foreknowledge. Without anxiously waiting to see when Dougie is going to become Cooper again or waiting to find out what Mr. C is looking for I'm able to linger in moments even more. Since it was that beautifully, hauntingly enigmatic finale I watched last night it's the episode most on my mind right now. 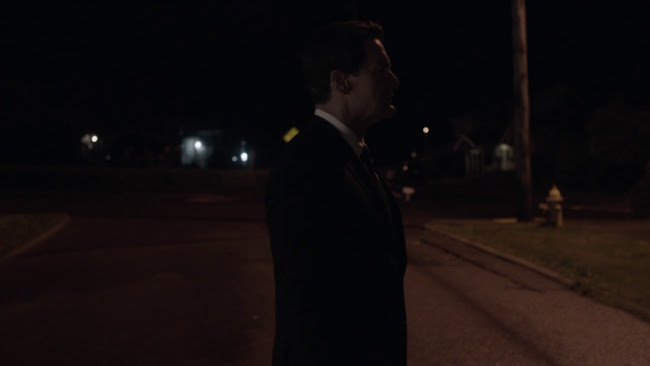 Incidentally, for those wondering what my opinion is on that final scene and what I think the answer is to Cooper's question, "What year is it?", I think the answer is no year at all. I think the reason Laura/Carrie looks confused when Cooper asks the question is that she realises she doesn't know either. This realisation starts a domino effect in her mind until she hears that ghostly echo of Sarah calling her for breakfast from the pilot episode. Then the lights in the house pop out, a malfunction as the show collapses. 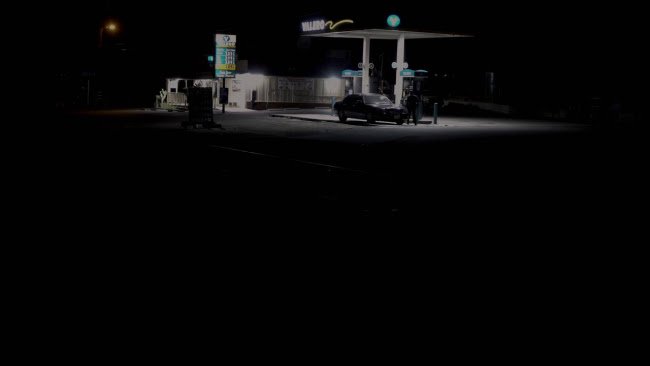 Looking for clues as to the year throughout the last episode, there are several cars that can be no newer than 2000. The Valero gas station they stop at confirms it can be no earlier than 1980, when the company was founded, at which point Laura would already have been living in the Palmer household. But what strikes me more about that scene is its coldness, like the rest of the segment beginning with Cooper and Diane entering the alternate world, there's something lonely about it. I realised episode 18 of the third season is the first in the series that doesn't jump around to focus on a variety of story threads. Aside from the new Dougie coming home to Janey E and Sonny Jim, the episode entirely focuses on Cooper as the protagonist. 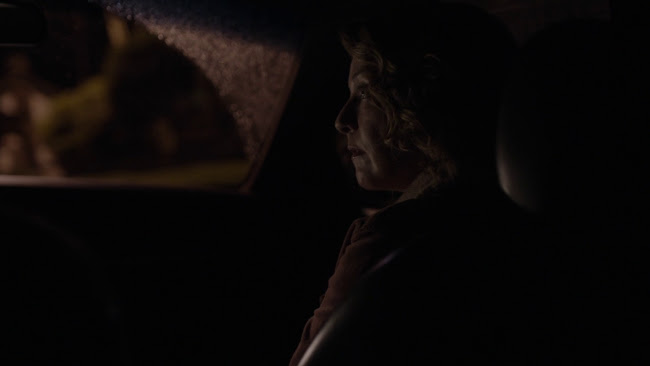 There's something oddly frail and vulnerable about it. As he and Carrie drive through darkness like a void it's like the horror of a world shed of complexity, the depressed obsessive person's focus on a single objective. The one moment Cooper starts thinking like a detective again, pulls that thread about the year, everything falls apart. 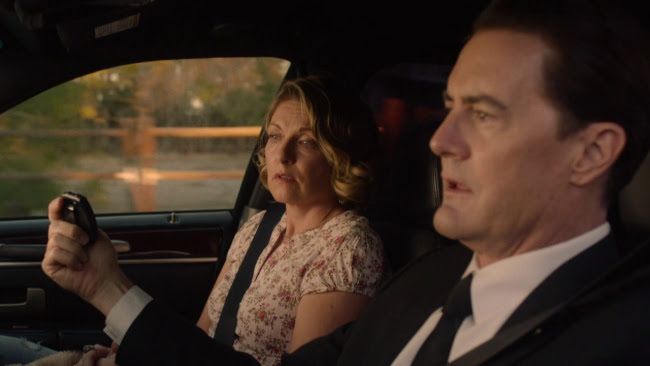 He shows Carrie his badge to establish his authority and when he talks to Diane and the people in the diner he always commands, he never requests--"Kiss me," "Turn off the light", "Leave her alone." It's interesting that his badge didn't come with him when he came back to the real world to replace Dougie. The only thing he had at that point was the Great Northern Hotel key--he'd even lost his lapel pin. We could guess that the reason is that the key was all he thought he needed--it had obviously been treated in the Black Lodge in some way to become an activator for the door in the boiler room to turn it into a portal. The strange sound Ben and Beverly hear begins when the key comes back to the hotel. 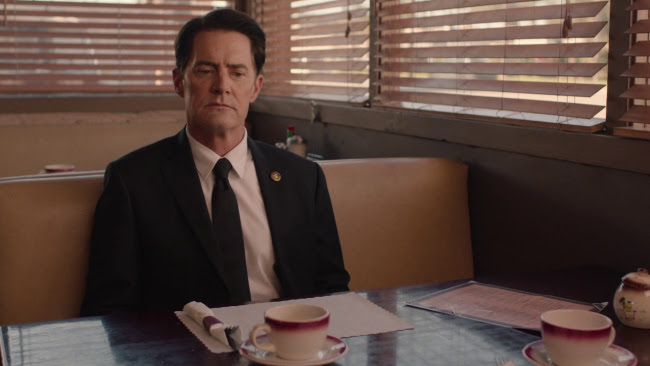 There's never the impression Cooper would do anything without any innocent person's consent but his role as an FBI agent has become important primarily for how it establishes him as an authority. I've read theories that say that Cooper's dream world begins when he and Diane drive to the end of those 430 miles but I think it begins in the Twin Peaks sheriff station when his face becomes superimposed on the action. The first thing that happens after that is that Candie comes in and says, "It's a good thing we made so many sandwiches." I think of Candie as sort of a canary in the coal mine, she's some kind of warning system that something is off. There's a pointed urgency in her tone and her line is implicitly about a large group of people--"so many sandwiches". When did they make those sandwiches? In the back of the car? On the plane? It seems like they rushed to the sheriff's station. Added to the absurdity of the moment Candie chooses to bring in snacks I think it's a warning to Cooper that reducing the world from its natural uncontrollable complexity in order for him to carry out a single minded pursuit is dangerous. 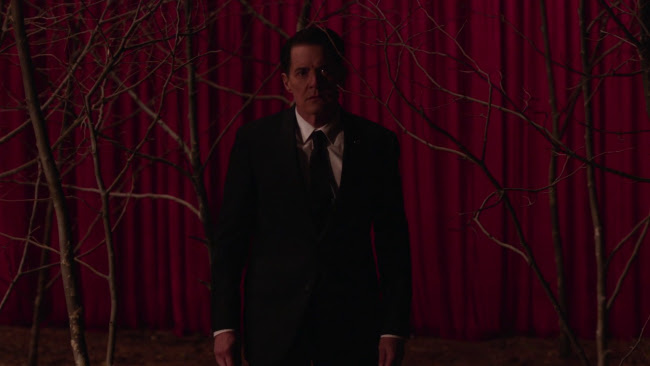 The Final Dossier talks about Cooper's preoccupation with saving women stemming from his childhood and his doomed relationship with Caroline. Caroline changing into Annie in the Black Lodge seems to confirm the place occupied in Cooper's mind by the women he cares for, though curiously he never seems to think of Annie once in the new series. In those twenty five years in the Black Lodge, the cosmic importance of Laura as a creation of the Fireman has been impressed upon him, something that combines with his lifelong preoccupation as either a very good or very bad coincidence. 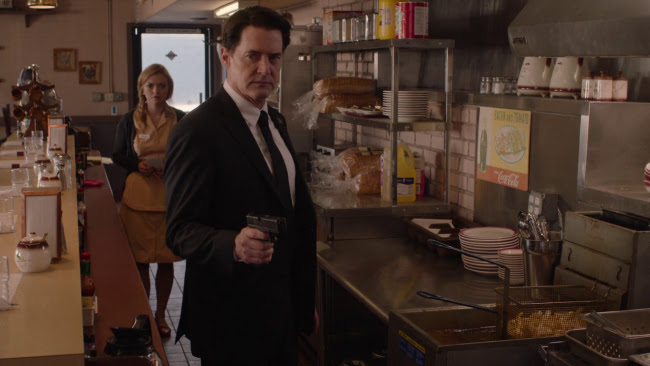 The odd thing about episode 18 is how dreamlike it doesn't feel to me. Concentrating on a single protagonist, using new, realistic locations, and the use of the real life occupant of the Palmer house make reality something that seems to be encroaching on Cooper and Laura. The world threatening Cooper's increasingly fragile dream.

Before the new series, a lot of people wondered if Judy was going to be another character played by Sheryl Lee, like Madeleine Ferguson in the original series. This made sense to me because I knew Madeleine was named after Kim Novak's character in Vertigo--a character whose real name was Judy. Now I wonder if that connexion is still so far off. What if Judy is the reality that denies the shared dream? Like Scottie can't resurrect Novak's Madeleine with Novak's Judy, Cooper can't resurrect Lee's Laura with Lee's Carrie. The scene from Fire Walk with Me used in episode 17 tellingly has Laura explaining to James, "Your Laura disappeared. It's just me now."

Jeez, I could chew on this all day. Well, maybe I'll continue this in another entry in a few days.